10 years on after losing his leg we take a look back at Royal Marine, Andy Grant's inspirational journey - The Guide Liverpool
Contact Us Advertise with The Guide Our Video Services Follow us:

10 years on after losing his leg we take a look back at Royal Marine, Andy Grant’s inspirational journey 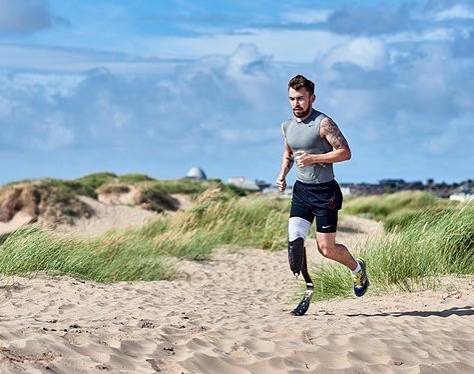 Home › Features › 10 years on after losing his leg we take a look back at Royal Marine, Andy Grant’s inspirational journey

Andy is a former Royal Marine and had woken up from a two-week coma – a miracle in itself – after being blown up five months into a tour of Afghanistan and suffering 27 separate injuries which led to his decision 18 months later to have his right leg amputated.

“No-one could have said anything to me that would have got me out of the dark hole I was in,” he says.

Yet today he is celebrating a raft of achievements that would seem impossible for even the fittest and most determined adventurer. Bootle-born Andy, 30, has climbed some of the highest mountains in the world, learned to ski and surf, skydived, taken part in triathlons and marathons, completed a 100-mile bike ride in America and tried his hand at skeleton racing, plummeting head first down a steep and treacherous ice track on a tiny sled…at around 80 mph.

And if that wasn’t enough he has won two track gold medals in the Invictus Games for wounded soldiers organised by Prince Harry, become the fastest single-leg amputee in the world over 10k and – his greatest achievement of all he says – become a dad to four-year-old little girl Alba.

“It’s been a crazy 10 years,” he says in typical understatement.

“One second I was a big, tough commando, and the next I was waking up from a coma with my dad feeding me cornflakes.

“It was clear that my career in the Royal Marines was over, and that broke my heart. And it was clear that I was never going to be active again and have the lifestyle I loved.

“As my injuries were explained, I was told I was never going to have children.  And my heart broke again.”

The transformation in his own words is ‘amazing’, so much so that Andy has written his autobiography, published in paperback at the end of last month, to inspire others into not giving up and grabbing the most out of life, whatever it throws at you.

Andy joined the Royal Marine Commandos at 17 and served for four months in Iraq before being posted to Afghanistan in 2008.

It was on a routine patrol in the notorious Helmand Province in 2009 that a friend and fellow soldier jumped over a ditch in front of him activating a trip wire that set off bombs.

“I remember lying on my back and saying again and again ‘have I still got my arms and legs?’.  Then the helicopter arrived, and I don’t remember a thing until I woke up in hospital in Birmingham.” Both his legs were broken and his femoral artery was cut when he lost a large chunk of his right thigh which could have caused him to bleed to death had a medic not acted quickly.

He was airlifted to Camp Bastion and spent two weeks in a coma before waking up in the hospital where he had almost 30 operations. Nerve damage meant his right leg had been left virtually useless and after going through rehab and seeing other veterans using prosthetic limbs, he made the decision the surgeon looking after him knew he would come to in the end, which was to have it amputated.

“My dad had pleaded with me not to do it but I was a passenger in my life and having the amputation put me back in control. I knew I would be more active without it than I ever was with it,” admits Andy.  “It was hard, and I went through some of the darkest times. The sudden change and trying to adapt to normal life was difficult.

“I suffered from depression; I was gambling too much and drinking too much.  My relationship with Alba’s mum broke down and I lost my way.  I felt I was doing nothing in the world.  That’s why I wanted to bring about the book, to be so open and honest, in the hope that I could be an inspiration to other people.

“It was my family, and my daughter Alba especially, who gave me a reason to get my life back on track. I wanted Alba to have a father she could look up to and I wanted to give her the best life possible. I started to get back to the gym and to sport, and to give myself challenges.

“My life now is a world away from the life I would have had – but I wouldn’t change a thing.”

Andy is still setting himself future challenges… like scaling Mont Blanc, the highest mountain in the Alps, and running across the Sahara desert in the famous Marathon des Sables, an ultra- marathon in which competitors cover around 150 miles in six days in temperatures of 50 degrees Celsius.

He is a motivational speaker travelling the world for people like Nike – the lifelong LFC fan is also proud to have spoken to the England Football squad before the World Cup – and he now wants to mentor on a one-to-one basis too.

“Being in the Marines definitely helped me to overcome everything, along with losing my mum from leukaemia when I was 12. When something like that happens, nothing else is as hard and that made me strong and determined.

“But you don’t have to be blown up in Afghanistan for life to be challenging.  You could be struggling financially, you might be made redundant, you might be homeless.  Life is difficult and the challenge is to cope with it.

“It’s about taking each day as it comes. It’s not what happens that defines you, but how you deal with it.

“For me the highs are high, and the lows are really low but I’m grateful for what I have now, my daughter and all the incredible opportunities that I would never have had before.

“I’m even starting a podcast – The Leg It podcast – this month, speaking to people who have had interesting lives like me.

“The worst thing that anyone can do is feel sorry for me.  I don’t want pity, why ever would I, when I feel like the luckiest man in the world?!”