Arriva is bringing Keith Haring to you - The Guide Liverpool
Contact Us Advertise with The Guide Our Video Services Follow us:

Arriva is bringing Keith Haring to you 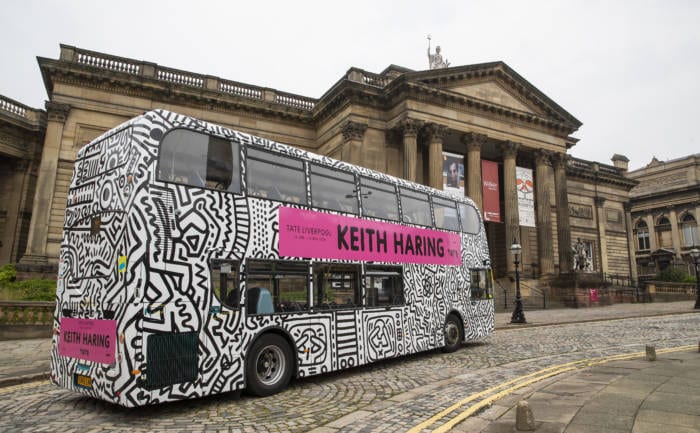 Home › Culture › Art › Arriva is bringing Keith Haring to you

To celebrate Tate Liverpool’s presentation of the first, major UK exhibition of artist and activist Keith Haring, Arriva have wrapped a double deck bus in one of Haring’s most notable works, The Matrix.

The bus will be running on various routes across Liverpool to celebrate the exhibition that showcases more than 85 artworks including large, vibrant paintings and drawings.

Also on display are posters, photographs, and videos that capture the vibrancy of 1980s New York street culture.

MORE: 9 reasons why you need to check out the Keith Haring exhibition

Made in 1983 The Matrix is a 9-metre long mural that features some of Haring’s most iconic symbols including crawling babies, barking dogs, flying saucers and TV’s.  The work is a highlight of the critically acclaimed exhibition that explores Haring’s part in the legendary New York art scene of the 1980s. Keith Haring (1958–1990) was inspired by graffiti, pop art and underground club culture but activism also played a key role in his art. Compelled to speak for his generation, his art responds to urgent issues including political dictatorship, racism, homophobia, drug addiction, AIDS awareness, capitalism, and the environment.

Arriva customers visiting the exhibition can receive a massive 50% off M Tickets (day tickets only) or 25% off Arriva Click bookings using the code TATE19 when purchasing online or in app. The exhibition and offer both run until 10 November 2019. Find more info on the offer here.

MORE: For more on the latest art in and around Liverpool see here

Head of Marking for Arriva, Lisa Pearson said ‘We are so proud to be involved with this project and working with TATE Liverpool is always very special for us. Wrapping the bus in Haring’s artwork not only increases awareness of the extensive exhibition at TATE Liverpool, but it captures people’s imagination and encourages exploration into the incredibly important movements and activism that influenced his work.

Helen Legg, Director, Tate Liverpool said ‘We’re incredibly proud to present the UK’s first major Keith Haring exhibition here in Liverpool and we’re delighted to be collaborating with Arriva. Not only does the bus look fantastic and gives an insight into Haring’s artistic interests but importantly Arriva’s generosity in offering discounted bus tickets is a brilliant opportunity for the people of Liverpool to visit the city centre for a reduced price.’

We spoke to Tate Liverpool about the exhibition.

Plan your journey with Arriva here or download the app.