The third annual Run For The 96 in Liverpool’s Stanley Park attracted 1,800 Reds and Blues on Sunday (14 May) to run in the 5K and new 1 Mile fun runs – making it the biggest to date.

The overall aim of the event is to remember and celebrate the lives of the 96 Liverpool fans, who were unlawfully killed in the Hillsborough tragedy on 15 April 1989.

Run For The 96 also remembers the families of The 96 and the survivors, who have tirelessly fought for justice with the utmost dignity.

After cheering the runners on for the last two years, Chair of the Hillsborough Family Support Group (HFSG) Margaret Aspinall, took part in the 5K for the very first time. Margaret walked the 5K course with Liverpool actor Michael Starke, fondly known as TV favourite Sinbad in city soap Brookside.

Michael attended Run For The 96 for the first time last year and was keen to get more involved, so 12 months ago they vowed to walk the route this year – and that’s exactly what they did.

Margaret Aspinall commented: “What an amazing day. It has a real community feel and raises money for great causes, and I just had to take part this year. The support we receive is fantastic and we have huge respect for everyone who has taken part, especially the little ones in the 1 Miler running in memory of The 96. Everyone should be very proud of themselves.”

Former Liverpool manager Rafa Benitez, who took the 2005 squad to glory to win The Reds’ fifth European Cup, developed a strong bond with the Hillsborough families during his time at Anfield.

Last year Rafa came along to support while his family took part in the 5K. This year, the Benitez family returned for a second consecutive year. Rafa again delighted fans who queued up on the start line for autographs, photographs and selfies, while his family again ran in the 5K.

Rafa Benitez said: “This is home so I am really pleased to come along and support with my family, who took part. This is a great thing for the community. It is really important to remember The 96, and the run brings Liverpudlians and Evertonians together – bringing Liverpool together as a city.”

Liverpool City Region Metro Mayor Steve Rotheram added: “This has become a real community event and it’s on the calendar now. When you think about why this came about, the tragedy itself and the aftermath – for people now to have something positive from all those terrible events is a healthy thing. We’ll never ever forget what happened that day or The 96, but to use that to spur people on to do something good can only be a great thing.”

In the minutes leading up to the start of the 5K, football club anthems You’ll Never Walk Alone and Z Cars played as Reds and Blues stood side by side, before a minute’s applause to remember The 96.

The runners then set off to the sound of The Justice Collective’s He Ain’t Heavy, He’s My Brother – the song which unites Liverpool and Everton and shows the solidarity of the Red and Blue sides of the city. The Farm’s Altogether Now played as the new 1 Mile fun run began.

The community legacy event included activities for all the family including a donation point for KitAid; soccer skills with the LFC Foundation and Liverpool Homeless Football Club; kids’ yoga sessions; and face painting. Volunteer teams on the day were from Stanley Park Junior parkrun and Kirkby Milers.

Run For The 96 5K is the brainchild of Dom Williams, who organises the annual Hillsborough to Anfield run. He developed the idea of Run For The 96 with race organisers BTR Liverpool to create a new 5K community legacy fun run as a way of engaging the wider community to run to remember The 96. BTR organise and deliver the Run For The 96 event. A new 1 Mile distance was introduced for this year’s event.

Funds raised and donations through last year’s event totalled £11,252.78 for the LFC Foundation and Everton in the Community, the charitable arms of the city’s two football clubs to enable them to continue their fantastic work across Merseyside – seeing them each receive £5,626.39.

This year, Stanley Park Liverpool CIC has come on-board as a third beneficiary alongside the LFC Foundation and Everton in the Community.

Stanley Park Liverpool CIC is a new enterprise set up 12 months ago to develop links between the park and local community, while encouraging people to further utilise Stanley Park as a community resource. 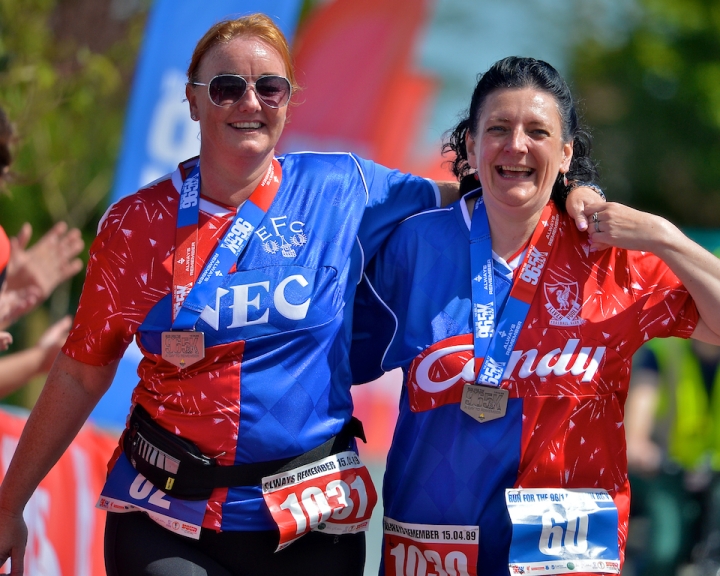 Together, all three organisations support the event’s original vision of creating a positive community legacy event, and commitment to ensuring that local communities benefit from the legacy run.

It was also a really special day for Liverpool fans, father and son Stewart Layhe (58) and Ben (26), who had travelled from Denver in Colorado, USA, especially to take part in the 5K. Originally from Prescot in Liverpool, Stewart hasn’t been back to the city for 25 years. Ben was born in England but had never been to Liverpool.

They supported Run For The 96 from home last year, and Stewart wore the 2016 T-shirt at the recent Boston Marathon. They watch LFC games at the Abbey Tavern, home to LFC Denver. An extended trip allows them to catch the last LFC match of the season at Anfield this weekend. They were thrilled to meet Rafa Benitez and Alan Kennedy at Run For The 96. 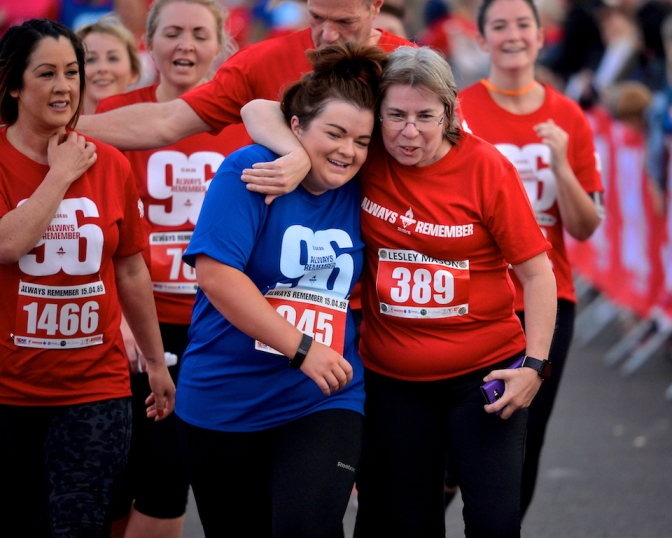 Stewart Layhe explains: “We planned our first trip home in time for Run For The 96. The sight of the Hillsborough memorial has been both a highlight of our trip home and a deeply moving experience. The resilience and character of the families has been inspirational, and it was an absolute honour to represent LFC Denver at the run. This was Ben’s first running event, but we ran together as this was a time for family unity, for friendship, for camaraderie and for remembrance.”

The official charity partners of Run For The 96 are the LFC Foundation, Everton in the Community, and Stanley Park Liverpool CIC. Funds raised and donations can still be made by visiting the official Virgin Giving page at https://uk.virginmoneygiving.com/RunForThe965k

The entry fee for Run For The 96 5K and 1 Mile pays to stage and deliver all aspects of the event.