Grammy-nominated Marley will play hits like “Boom Draw”, “Systems”, “Lemme Go” and “Violence in the Streets”, complete with his 11 piece band alongside a very special support act, Iba Mahr.

Julian Marley, son of reggae legend Bob Marley and Barbados-born Lucy Pounder, is a Grammy award nominated, roots-reggae musician, singer-songwriter, producer and humanitarian. In the same tradition as his father, Julian is a devout Rastafarian whose music is inspired by life and spirituality.

For Julian, music is life, life is music and both are blessings. “From a small age music has been there in my life. It’s just natural. And it is with the inspiration of the Most High that I create my songs” he explains.

A humanitarian at heart, Julian Marley naturally leans toward building on charitable missions and contributing to the Ghetto Youths Foundation, which allows him to give back to youths in various communities. Whether it’s reasoning with children at the football fields in London, or offering his time to benefit concerts, Julian consciously looks towards finding ways to help build positive guidance that benefit the youth of today.

Support onm the tour comes from Iba Mahr, whose music ranges from reggae and lovers rock to soulful roots.

Marley will be playing with a live band at District in Liverpool on Saturday 20th August. Tickets are on sale now via Skiddle. 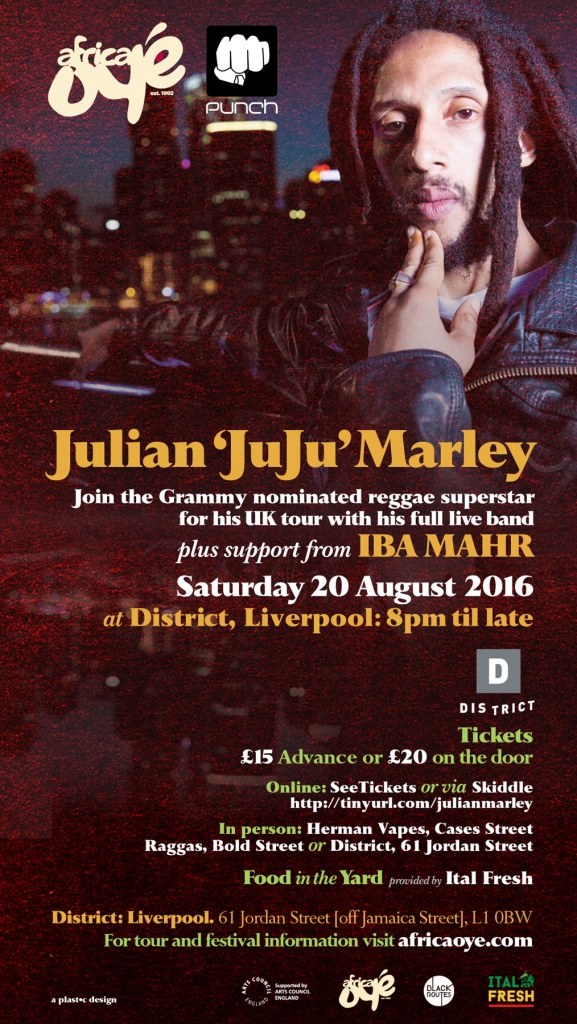