BOSS: Madrid Send Off Party for LFC is coming to Space by M&S Bank Arena - The Guide Liverpool
Contact Us Advertise with The Guide Our Video Services Follow us:

BOSS: Madrid Send Off Party for LFC is coming to Space by M&S Bank Arena 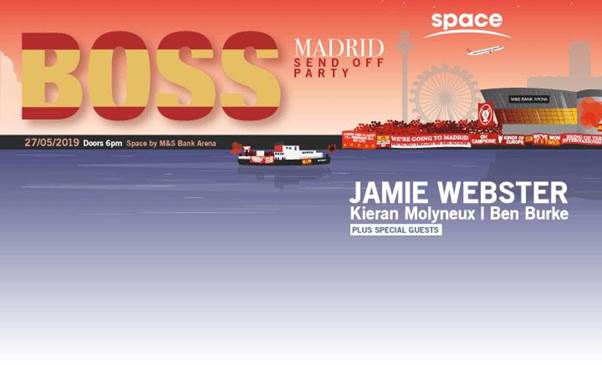 Home › Going Out › BOSS: Madrid Send Off Party for LFC is coming to Space by M&S Bank Arena

Watch above as our Jay meets Jamie Webster & Kieran Molyneux from a BOSS Night as they build up to the LFC Madrid Send Off Party, Bank Holiday Monday (27 May) at SPACE by M&S Bank Arena.

The Mighty Reds have reached the Champions League final for the second year running and Jurgen is going to take heavy metal football to the Wanda Metropolitano on June 1. As a warm up and to say buen viaje, or just come on lads we’ll be bringing sweet music and a red hot atmosphere to Space by M&S Bank Arena on Monday 27 May. On Bank Holiday Monday BOSS are hosting a Madrid Send Off Party at Space by M&S Bank Arena.

BOSS’ post match events for Liverpool fans have gained massive world wide attention over the past few years with Jamie Webster shooting to fame for his take on Kop chants including Allez Allez Allez.

Webster will be joined on the night by Kieran Molyneux and Ben Burke along with very special guests just days before the reds head from the fields of Anfield Road to Madrid for the Champions League Final.

Kick of an exciting week with your favourite Liverpool songs and an atmosphere second to none.