Celebrations for A-level students at Archbishop Blanch School in Liverpool - The Guide Liverpool
Contact Us Advertise with The Guide Our Video Services Follow us:

Celebrations for A-level students at Archbishop Blanch School in Liverpool

A footballer, a student with cerebral palsy and two next-door neighbours planning to go to university together have been among the students celebrating A-level results at a Liverpool school.

Archbishop Blanch School rolled out the red carpet for sixth-form students collecting their results on Tuesday after two years of study which has been disrupted by the coronavirus pandemic. 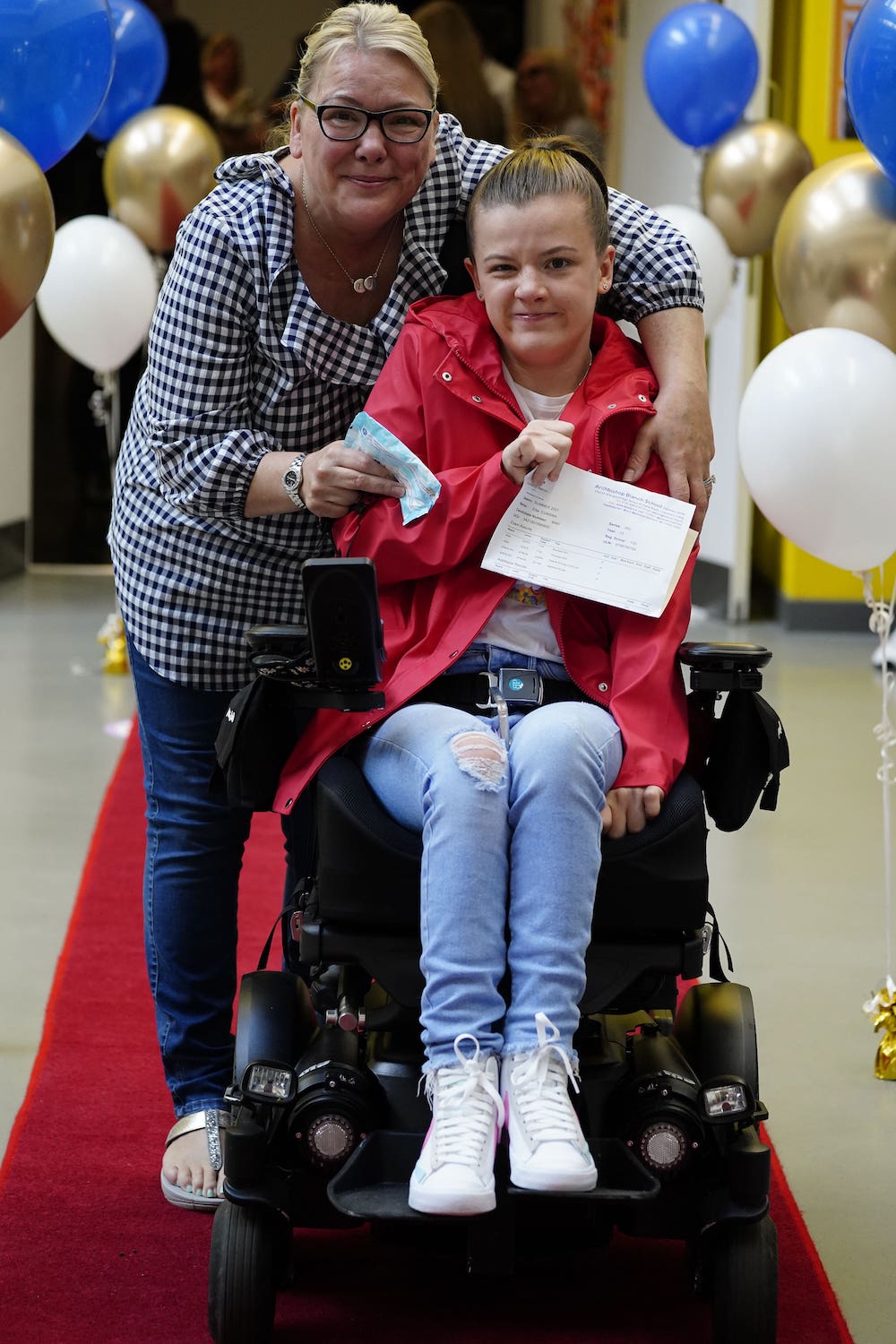 Among those accepted for a university place was Evie Smith, 18, who has been combining her studies with playing football for Liverpool FC Women under-21s.

The left-back, who will now decide whether to study sport science at Liverpool John Moores University or focus on football, said: “I’m really happy.

“I’ve been playing for the under-21s for the past two seasons while I’ve been in sixth form.

“It’s difficult trying to balance my time but the club are really supportive with that.”

The teenager has been training with the first team and collected her results in her kit, before heading straight to a training session.

Ellie Curran, 19, was also celebrating after achieving an A* in sociology, a B in business and a distinction in BTEC law, meaning she can go to Liverpool Hope University and study criminology.

Miss Curran, who has cerebral palsy and uses a wheelchair, said she was “in shock” at the results and working from home during the pandemic had been “dead hard”.

Her mother Margie said: “She’s very dedicated, in lockdown she would be up at 8am at her desk. 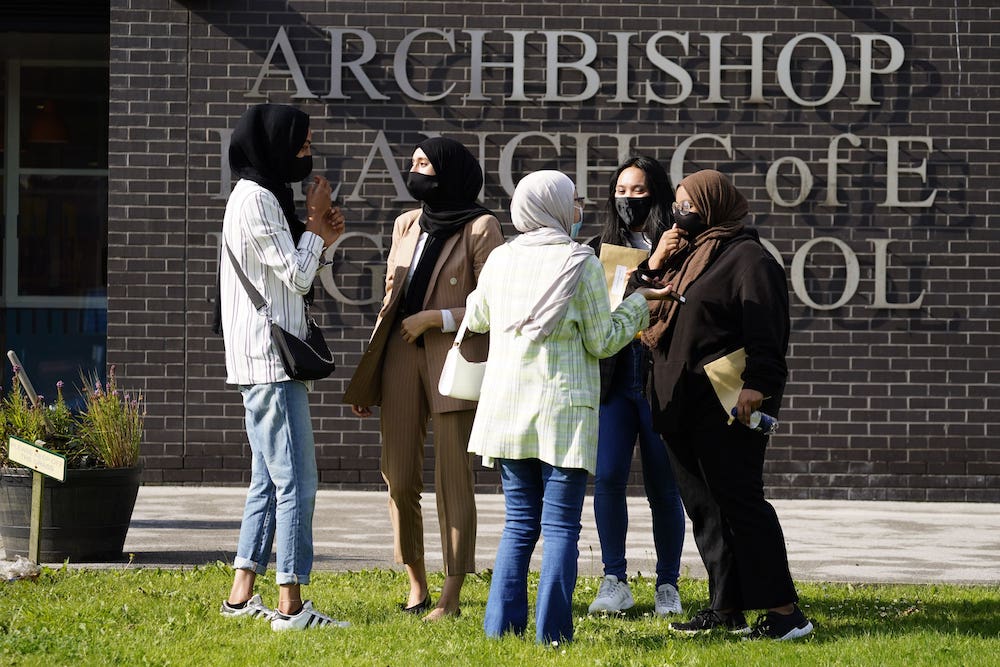 “She’s always been dedicated, I think she just wants to prove everyone wrong and show she can do it.”

Alongside her studies, Miss Curran plays for the Greenbank Powerchair Football Team and manages the club’s social media.

Best friends Faith Bryant and Abbie Hollis, both 18, each gained three A*s in their A-levels and are planning to go to the University of York, where Miss Bryant will study chemistry and Miss Hollis will study neuroscience. 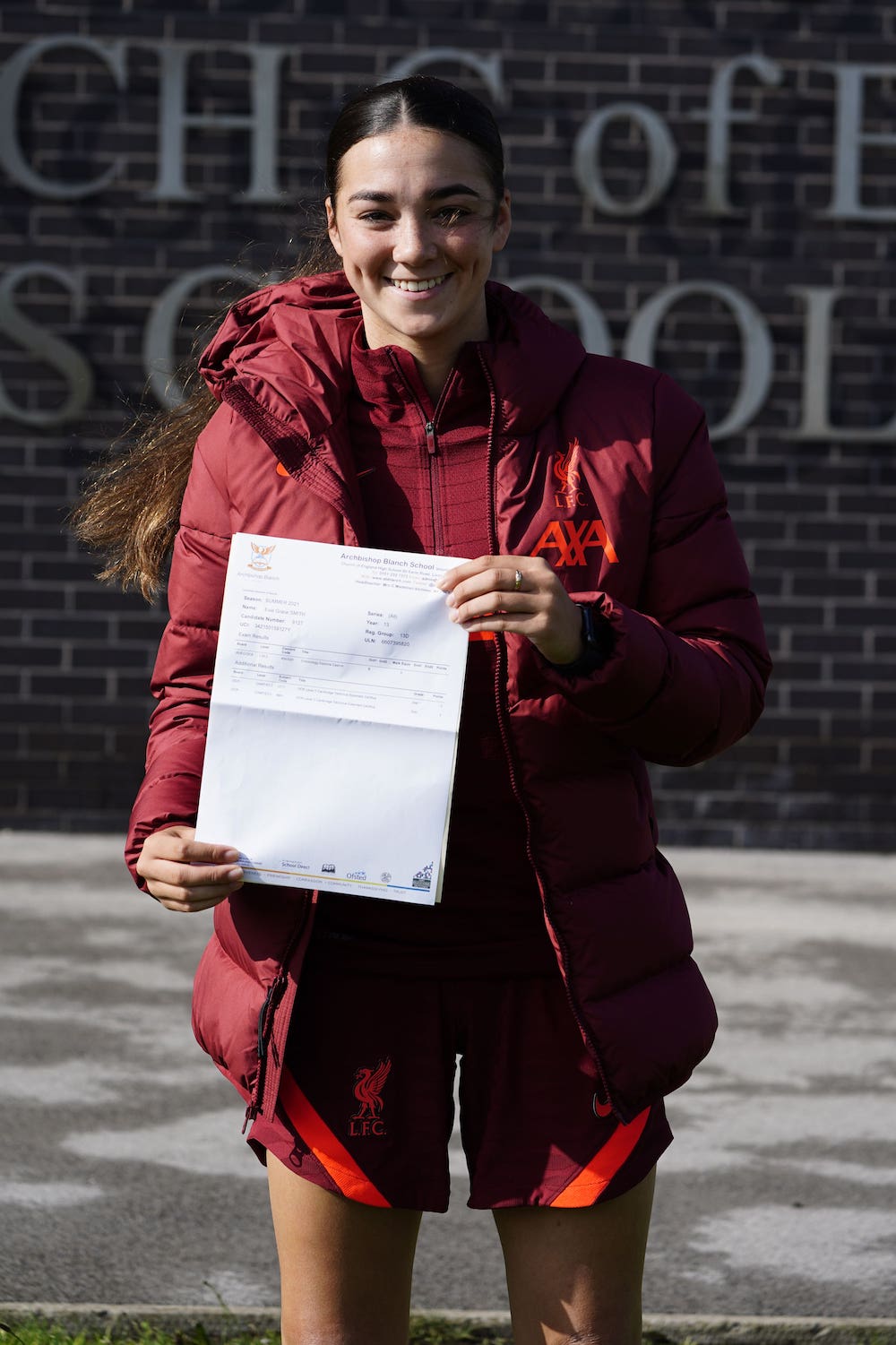 Miss Bryant said: “We moved in next door to each other in Year 7 and we haven’t separated since.”

Both said they had found learning at home in lockdown hard, but had adapted.

Miss Bryant said: “It’s probably been better for school because we haven’t been able to go out!”

Charlie Jones-Langan, 19, said he was planning to study medicine at the University of Liverpool after receiving an A* and two As.

He said: “Going through the pandemic has made me want to study medicine more because I’ve seen how much they have struggled.

“I wish I had been a few years ahead so I could have got involved to help.”

Headteacher Claire Madeloso said the past two years had been “really tough”.

She said as well as teaching, staff had to provide pastoral care and take on tasks such as dropping off laptops and dongles to ensure everyone could learn online.

She said: “I know a lot more now than I knew a couple of years ago!

“Not what I have trained for, but really it was so important for me to keep the school on track, moving forward and open.

“It did feel like one thing after another but when you get to a day like today that’s when it feels like all the hours and the effort were all worth it.”