Chinese New Year Liverpool 2019: The Highlights Video - The Guide Liverpool
Contact Us Advertise with The Guide Our Video Services Follow us: 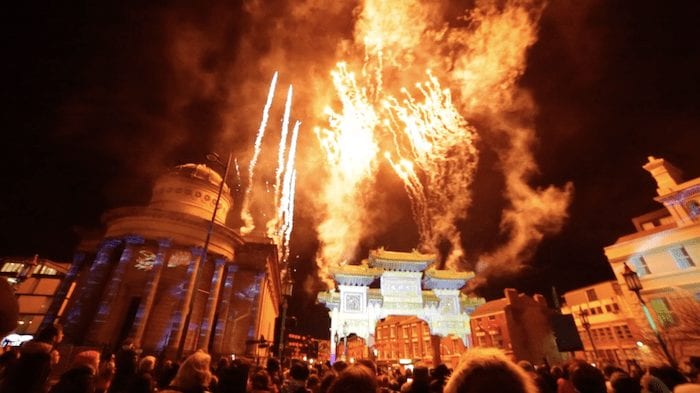 Liverpool’s China Town was full of festival fever at the weekend as people came from far and wide to celebrate the start of Chinese New Year. Alongside the annual parades and firecracker displays, visitors were treated to a market, funfair, live music performances and an incredible light projection and pyrotechnics show from the famous Chinese Arch.

MORE: Plan the rest of year in Liverpool with our 2019 Liverpool Event Calendar

Chinese New Year in Liverpool brought together a number of celebrations in one, three day extravaganza. The start of the new year, the Year of the Pig and the 20th anniversary of the twinning of Liverpool and Shanghai were commemorated in many different ways.

Culture Liverpool and the Chinese Business Community worked with a number of partners and sponsors including Liverpool City Council, University of Liverpool, Heart FM, Royal Liver Building 360, Stagecoach and more to create an event with something for everyone.

Celebrations began on Friday (8th February 2019) with the first showing of the incredible light projection. The story followed on from last year as main character Jing Wei travelled from East to West, connecting China to Liverpool, showcasing the city skyline, animals from the zodiac and pyrotechnics that wowed the crowds.

Sunday’s entertainment spanned the entire day as thousands travelled from far and wide to enjoy the spectacle. As dragons, lions and unicorns danced along the China Town streets bringing prosperity, luck and good health, firecrackers echoed across the city.

The Bombed Out Church of St Luke’s held drumming displays and a weekend market, packed with local traders, birds of prey and craft sessions for youngsters.

Great George Square and Nelson Street was a hive of activity from morning til night as people lined the streets to watch street performers represent Chinese art and culture. From fan dancers and drummers, stilt walkers to the famous Lucky Man who handed out red envelopes to fascinated children.

The coming together of the Lions, Dragon and Unicorns for the Firecracker display was a highlight for many families. With shadow puppet shows, Chinese calligraphy, fun fair rides, acrobatics and storytelling sessions on the Stagecoach bus, there was something for children of all ages to enjoy.

MORE: Get more Culture for Liverpool in our cultural listings here.

The Taste of China Market offered lots of delicious food options including fresh noodles and hot spring rolls, while other stalls sold traditional Chinese gifts and home wear. China Town restaurants were packed through-out the day as people fully immersed themselves in the celebrations.

The finale to the weekend events took place at 6pm on Sunday with thousands of people braving the rain to watch the final showing of ‘The Quest for the Arch’ which lit up The Black E and surrounding buildings. Accompanied by a mesmerising soundtrack and pyrotechnics, the show ended with huge cheer and round of applause.

Tag us in your pictures from Chinese New Year in Liverpool on Twitter, Facebook and Instagram and find out more about what Culture Liverpool have planned for the year ahead here.