Combined Authority announces up to £45m plan to support region’s biggest regeneration project in over a decade - The Guide Liverpool
Contact Us Advertise with The Guide Our Video Services Follow us:

The Liverpool City Region Combined Authority has announced plans to invest up to £45m to support the “transformational regeneration” of large parts of north Liverpool and south Sefton by supporting work linked to the development of Everton FC’s new stadium at Bramley-Moore Dock.

Next week, local leaders will consider a grant of up to £15m to assist with infrastructure work to public space and heritage sites on the land around Bramley-Moore. This would include preserving historic features, restoring derelict land, and providing public access to the docks.

The Combined Authority will also consider a loan of up to £30m towards the overall project to build the club’s new 52,888-seat stadium. The wider stadium project will be a vital catalyst for regeneration of Liverpool’s north docks and the area around Goodison Park. Everton forecast the project will offer a boost of more than £1bn to the city region’s economy, attract 1.4m visitors to the region each year and deliver an additional £237m of social value.

The Combined Authority’s funding would come with conditions – including that Everton commit to targets for employment and training opportunities for local residents and the achievement of social value.

As well as providing jobs and apprenticeships and stimulating the area’s regeneration, the loan would offer a return on investment, plus interest that could be used to fund other projects and services across the city region.

The stadium will take around three years to build and will become one of the north of England’s largest construction projects. Overall, the project will create up to 15,000 jobs including new roles at the completed stadium and employment linked to a projected increase in visitors to the city region.

The stadium move will also kickstart the Goodison Legacy Project which will redevelop the club’s existing ground into a mix of housing, retail, office space and facilities for the community. 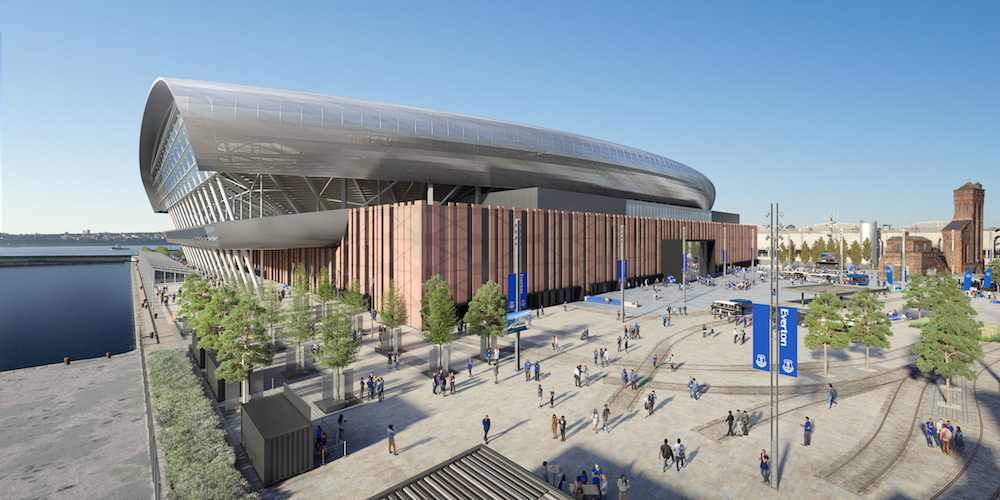 As part of the deal, Everton will lead on campaigns focusing on chronic health issues in north Liverpool. Increased funding for the club’s charity, Everton in the Community, will allow an expansion of its work in education, training, employment, youth projects, reducing crime and violence, supporting asylum seekers and veterans and health and wellbeing.

“The Combined Authority exists to drive economic regeneration, create jobs and opportunities for local people, and breathe new life into an area that has continually been left behind by national governments. Devolution is all about local leaders taking control of our own destiny and working with local people to shape the future we want for our region.

“This project stands as one of the most significant regeneration projects our region has seen in more than a decade and will be a major catalyst for regeneration and revival in an area that has been crying out for investment for decades.

“This is not an investment in a football club but in an important project that will generate a myriad of social and economic benefits for communities across our region. From creating thousands of jobs, training and apprenticeship opportunities for local people, attracting hundreds of thousands of new visitors to our region and launching programmes that will help to tackle health and social inequalities, whilst supporting the vulnerable within our communities.

“The financial returns generated from this investment will ensure that we are able to invest in further regeneration projects and services across the city region. Given austerity and the financial constraints that local councils continued to face, this is an innovative way of generating new money and investing to improve our region.”

MORE - These Clatterbridge doctors are taking part in the world’s first 100,000-person marathon

After moving to the new stadium, Everton will redevelop Goodison Park as part of a project which alone is forecast to create more than £58.2m worth of social value, driven by increased wellbeing in the area. Outline planning consent has already been granted and the club is committed to starting work on the Goodison site within three years of moving to Bramley-Moore Dock.

A report going before the Combined Authority next Friday states: “The project provides the opportunity for transformational regeneration of North Liverpool and South Sefton/Bootle areas. It comprises a number of elements: the new stadium at Bramley-Moore Dock, the Goodison Legacy Project; and wider and accelerated regeneration of the Northern Docks area, alongside expanding the outreach and offering of Everton in the Community’s activities.”

The report adds: “The stadium is anticipated to attract further investment in the Northern Liverpool Docks area in a way no other commercial project is likely to achieve with wider impact spreading into adjacent areas such as South Sefton.”

The grant would help cover the higher cost of developing a challenging and historic dockland site and would fund work of a non-commercial nature.