Comic Con Liverpool 2019: Star interviews, amazing cosplay & more from the final day at Exhibition Centre - The Guide Liverpool
Contact Us Advertise with The Guide Our Video Services Follow us: 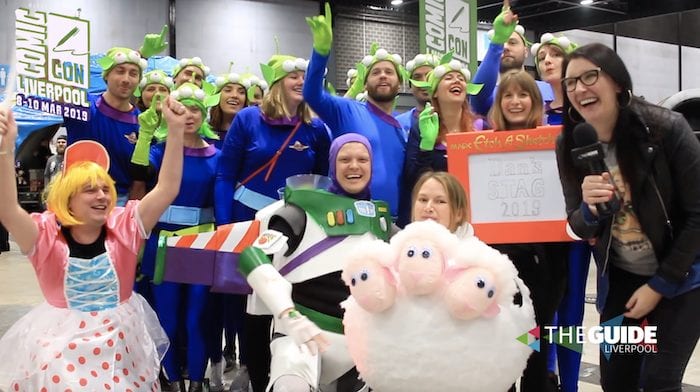 The stormy weather couldn’t deter the cosplayers from attending the final day of Comic Con Liverpool 2019.

The third and final day of Comic Con Liverpool 2019 was a wet and windy one but inside Exhibition Centre, thousands were busy meeting their heroes, snapping hundreds of pictures with their favourite cosplay characters, dancing a huge conga and buying all the official merch they could carry!

Watch above as we chat to Twilight star, Peter Fascinelli and Yellow, Blue and White Power Rangers, actors Tracy, Michael and Jeff about why they love con and our amazing city.

The special guest line up for Comic Con Liverpool 2019 had fans snapping up tickets months in advance. With the likes of Adam Baldwin, Sean Maher, John Challis, Eric Roberts and of course, Dean Cain and Teri Hatcher on the bill, you can see why.

One particular guest had fans queueing for almost an hour for a few minutes of his time. Oscar nominated actor, Burt Young, famed for playing Rocky’s future brother in law, Paulie, made the trip all the way to Liverpool to meet his British fans. Watch above as he takes time out to chat with our Kate about how genuine and kind his fans are.

We had such a brilliant time at Comic Con Liverpool 2019. Huge congratulations to Andy and all the team at Monopoly Events who worked so hard to bring another independent event to our city. Comic Con Liverpool is created by the fans, for the fans and we can’t wait to see it return in 2020.

To find out more about the up coming fan conventions from Monopoly Events, including For The Love of Wrestling, head to www.monopolyevents.co.uk.

We want to know what you thought of Comic Con Liverpool 2019. Did you meet your hero? Win the cosplay competition? Drop us a line on Twitter, Facebook or Instagram and we’ll share you pics and videos on our socials.