Countdown is on for the 15th Liverpool Santa Dash - The Guide Liverpool
Contact Us Advertise with The Guide Our Video Services Follow us:

Countdown is on for the 15th Liverpool Santa Dash 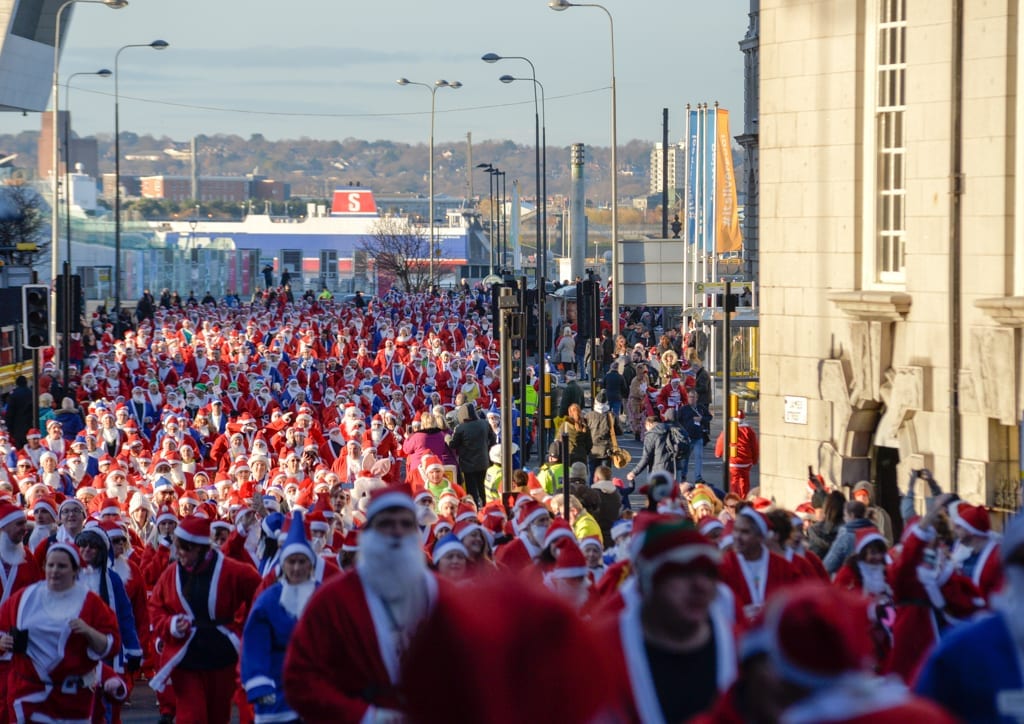 Dashing Santas in Liverpool will pull on their running shoes in six weeks to take part in the UK’s biggest festive 5K fun run.

The date for the 15th BTR Liverpool Santa Dash has been confirmed as Sunday 2 December 2018, starting at 9.30am from Pier Head Liverpool.

The festive spectacular is highly regarded as Liverpool’s kick-start to Christmas – and up to 10,000 red, blue and mini Santas will take part.

First staged in 2004, the BTR Liverpool Santa Dash was created by BTR Liverpool Race Director Alan Rothwell. The event has since continued to grow in popularity.

Three years later, the festive fun run was expanded to include the 1K Mini Dash for under 12s, followed by the introduction of blue Santa suits in 2010 by public demand.

More than 1,500 excited Santas have already registered to take part in this year’s event. Places for Blue Santa suits are limited.

Santas will gather on the start line at Pier Head Liverpool, part of the city’s iconic UNESCO World Heritage Site.

The route will then take Santas through the city centre, before crossing the finish line outside Liverpool Town Hall on Dale Street where they will be greeted by festive characters and ‘real’ snow.

This will be followed by the 1K Mini Dash for under 12s. It starts in Castle Street at approximately 11am after all participants in the main Santa Dash have completed the course. The mini Santas will also enjoy the same festive finish line at Liverpool Town Hall.

The Churchill Flyover is closed for essential works, which means it will not be part of the route for 2018. BTR Liverpool have been left no choice but to amend the route, and details will be announced shortly.

BTR Race Director Alan Rothwell commented: “The 15th annual BTR Liverpool Santa Dash is just around the corner and we’re really excited about this year’s event. We have some exciting announcements to make in the coming weeks. We’re in the final stages of confirming the revised route, and a formal announcement is imminent.

“The Santa Dash is accessible and open to everyone. Wheelchair participants, prams and dogs are very welcome. Even unicyclists regularly take part, which causes quite a stir along the route.

“The sea of red and blue Santas gathering at Pier Head Liverpool and making their way through the city really is a breathtaking sight. It’s a real highlight in our BTR event portfolio, and we invite people to join us to make this year’s event the biggest yet.”

Entry includes a Santa suit and commemorative finishers’ medal. The entry fee covers all costs to organise and deliver the event.

Santa suits will be available to collect from Thursday 1 November 2018 from St Johns Shopping Centre. Register  via the BTR website here .