Covid isolation period has been cut and there's a promise of no further restrictions before Christmas - The Guide Liverpool
Contact Us Advertise with The Guide Our Video Services Follow us:

Covid isolation rules have changed meaning thousands of people get to see their families in time for Christmas.

The self-isolation period for fully vaccinated people who have coronavirus has been cut to a week as Boris Johnson reassured the public that Christmas will be able to go ahead without further restrictions.

From Wednesday, those in England who receive negative lateral flow results on day six and day seven of their self-isolation period, and are vaccinated, will no longer have to self-isolate for the full 10 days.

The rule change may help thousands of people see their families in time for Christmas.

It came after the Prime Minister said “continuing uncertainty” about the severity of the Omicron variant and hospital admission rates means he does not believe there is enough evidence at the moment to justify stricter measures.

However, he stressed the situation remains “finely balanced” and did not rule out introducing stricter measures soon after Christmas.

In a video message, he said:

“There is no doubt that Omicron continues to surge with a speed unlike anything we’ve seen before.

“The situation remains extremely difficult but I also recognise that people have been waiting to hear whether their Christmas plans are going to be affected. 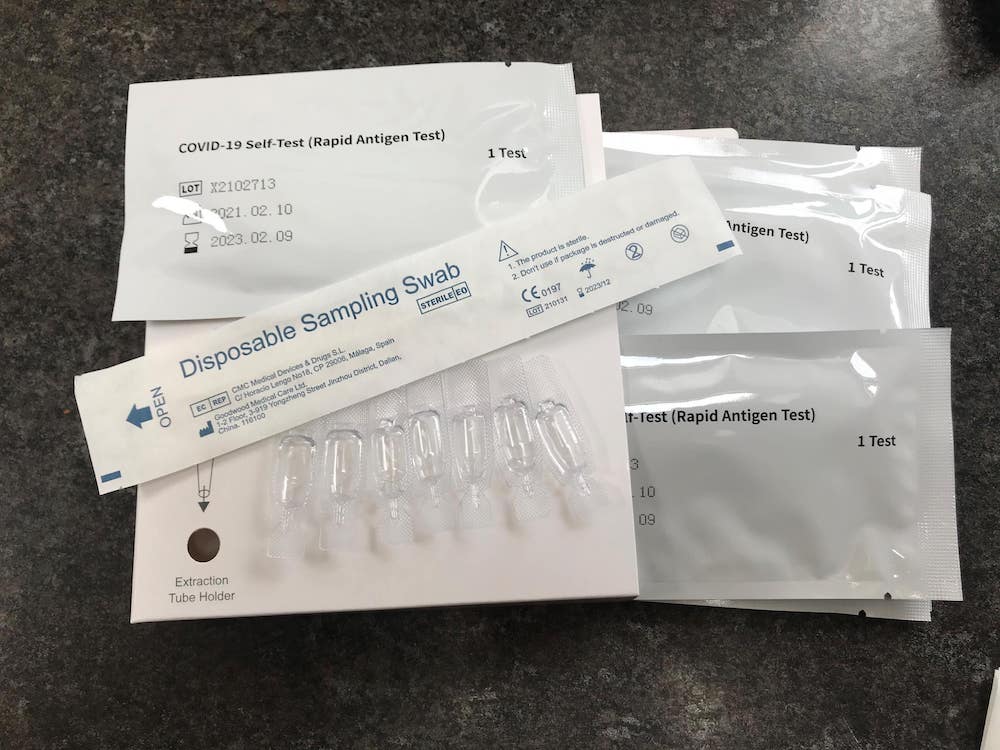 “So what I can say tonight is that naturally we can’t rule out any further measures after Christmas – and we’re going to keep a constant eye on the data, and we’ll do whatever it takes to protect public health.

“But in view of the continuing uncertainty about several things – the severity of Omicron, uncertainty about the hospitalisation rate or the impact of the vaccine rollout or the boosters, we don’t think today that there is enough evidence to justify any tougher measures before Christmas.”

Figures from NHS England show that 1,904 people were in hospital in London with Covid-19 as of December 21, the highest number since March 2 and is up 41% from a week earlier.

Across England, 6,902 patients were in hospital with Covid-19 on December 21 – the highest number since November 10 and up 7% week-on-week.

Mr Johnson added: “We continue to monitor Omicron very closely and if the situation deteriorates we will be ready to take action if needed.

“What this means is that people can go ahead with their Christmas plans, but the situation remains finely balanced and I would urge everyone to exercise caution, to keep protecting yourselves and your loved ones, especially the vulnerable.

“And remember to keep following the guidance – wear a mask indoors when required to do so, keep fresh air circulating, and take a test before you visit elderly or vulnerable relatives.”

Responding to Mr Johnson’s announcement, shadow health secretary Wes Streeting said “we are all breathing a sigh of relief that Christmas is going ahead as planned”, but insisted “the country also deserves some certainty about what comes after Christmas so that families and businesses can plan ahead”.

He added: “The virus won’t be taking Christmas off and there’s still a risk of the NHS being overwhelmed in the new year. Boris Johnson is too weak to get any measures to keep the country safe through his Cabinet.”

After a briefing on the Omicron variant with the Government’s chief scientific adviser Patrick Vallance, chief medical officer Chris Whitty and health minister Ed Argar on Tuesday evening, Conservative MP Sir Peter Bottomley, the Father of the House, said “most MPs of all parties now are aware of what is the factual basis for understanding the situation”.

Sir Peter told the PA news agency: “There are some things unknown now which will become better known over the next week or two. And there are a number of myths which people need to be aware of.

“The next point is this: the statistics are a combination of the growing numbers of the new variant and the declining tail of the old variant. And you cannot just combine the two to give yourself a proper picture of what is going on and what might go on.”

In Wales, more Covid restrictions are expected to be announced on Wednesday as the Welsh Government meets to discuss hospitality measures.

The Northern Ireland executive will also decide on the same day what “level of asks” will be made of the public to curb the latest surge in Covid-19.

Scotland’s traditional Hogmanay celebrations will be cancelled and live sports will be “effectively spectator-free” for three weeks from Boxing Day as part of new Covid-19 restrictions, Nicola Sturgeon said on Tuesday.

The First Minister also introduced new curbs on hospitality and urged people to “stay at home as much as possible” until at least the first week of January.

On self-isolation for Covid cases being cut to seven days in England, Health Secretary Sajid Javid noted ministers “want to reduce the disruption from Covid-19 to people’s everyday lives”.

He went on: “Following advice from our clinical experts we are reducing the self-isolation period from 10 days to seven if you test negative on a lateral flow test for two days running.

“It’s vital people keep playing their part by testing regularly and isolating if they test positive. And I urge you to get boosted now to protect yourself and those around you.”

Speaking to BBC News, Javid described the decision as a “sensible way forward”.

He said: “I think this is a very sensible, balanced and proportionate take. It is great that when people do get infected that they are properly isolating, I think that clearly helps prevent infection.”

The green light to Christmas comes after Chancellor Rishi Sunak offered a £1 billion support package to hospitality and leisure businesses hit by Covid restrictions amid concerns over the high transmission of Omicron.