Dispersal Zone introduced on Liverpool's waterfront following anti-social behaviour incidents this weekend - The Guide Liverpool
Contact Us Advertise with The Guide Our Video Services Follow us:

A Dispersal Zone has been put in place on Liverpool’s waterfront following further reports of criminality and anti-social behaviour in the area over the weekend.

At about 9.15pm on Friday 24 July officers were called to reports of around 80-100 youths fighting at Keel Wharf on the waterfront.

When they arrived they found two teenagers who had each received a stab wound to the buttocks. Both boys were taken to Alder Hey Children’s hospital where they were treated and they have now been discharged.

Detectives are carrying out extensive forensic and CCTV and enquiries into the incident and are appealing for anyone who may have witnessed the incident, or with any information, to come forward.
MORE - Liverpool uses art to send out anti-hate crime messages for Pride weekend
Similarly, if you were in the area and captured any mobile phone footage, please get in touch and share this with detectives as it could prove vital to enquires.

During this week we received many reports of anti-social behaviour including assaults, intimidation, people on paddleboards being pushed off into the water and their boards being taken over by youths, drugs misuse and objects being thrown at canal boats.

We have increased the number of officers on patrol in the waterfront in response to these incidents and this, together with the latest dispersal zone, will allow law abiding residents to enjoy with waterfront without their experience being marred by criminal and anti-social behaviour. 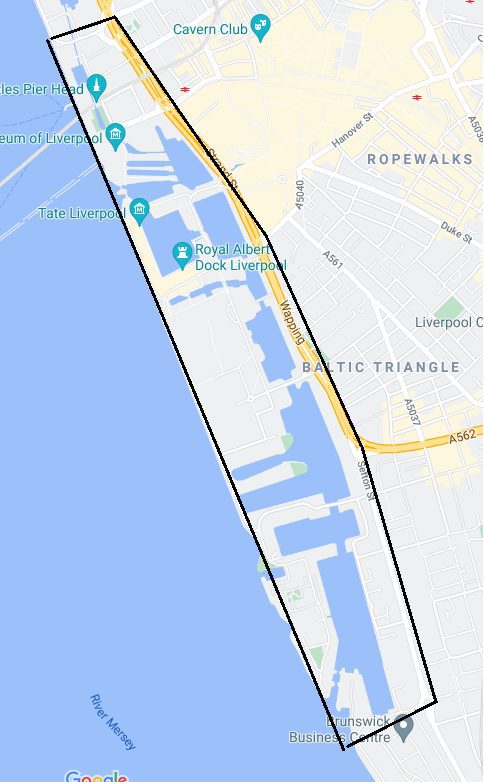 Merseyside police also continues to work with Liverpool City Council, businesses and residents to ensure the waterfront is a space that can be safely enjoyed by all.

The Section 34 began at 7pm yesterday (Sunday, 25 July) and remains in place until 7pm on Tuesday 27 July.  It will cover the area pictured and is bounded by the following: the River Mersey, St Nicholas Place, Georges Dock Gates, The Strand, Wapping, Chaloner Street, Sefton Street and Brunswick Way.

Police officers and police community support traffic officers powers will again have the power to direct people they suspect are causing or likely to cause crime, nuisance or anti-social behaviour to members of the public to leave a designated area and not return for up to 48 hours.

Under the legislation, officers have the power to seize any item used in the commission of anti-social behaviour.  Should a person who has previously been directed to leave the area return, an offence would be committed, which they may ultimately be arrested for.

Inspector Charlotte Irlam said: “At Merseyside Police we simply will not tolerate people visiting the Albert Dock to enjoy the sunshine and facilities being subjected to violence, intimidation and fear.

“That’s why a further dispersal zone has been introduced following disgraceful behaviour at the waterfront over the past week including appalling incidents involving weapons, leaving young people injured.

“We have also significantly increased the number of officers in the city and around the waterfront. They will not be troubling people who are in the city to enjoy themselves. They are there to target those involved in criminality and keep the city safe for those who just want to come and enjoy our beautiful waterfront and the good weather.

“Dispersal zones are certainly not designed to prevent young people, or anyone else, from meeting at the docks to enjoy what is a world-renowned space with fantastic architecture and facilities. It is not about stopping young people from meeting with their friends after such a challenging time during lockdown, the majority of whom have behaved perfectly reasonably.

“It is simply about making sure the minority who come intent on behaving anti-socially can be moved out of the area, to enable people of all ages to feel safer and enjoy everything the waterfront has to offer.

“Neither are dispersal zones used in isolation. Officers from across the Force work in partnership to identify, intervene and support young people who may be at risk of becoming involved in anti-social behaviour or crime, to benefit them and the communities in which they live.

“Rest assured, if you are out and about enjoying the waterfront and have any concerns this week, please speak to our officers out on patrol or contact us and we will take positive action.”

If you have information about criminal activity or anti-social behaviour at the waterfront or in your community, contact us by DM via our social media desk on Twitter @MerPolCC or Facebook ‘Merseyside Police Contact Centre’.

You can also contact the independent charity Crimestoppers anonymously, on 0800 555 111 or via their online form here.