Utterly tragic news to wake up to this morning, that all four members of Warrington indie band Viola Beach have died along with their manager after a crash in Stockholm, Sweden.
The group formed after singer Kris Leonard bumped into drummer Jack Dakin, a mate from primary school, at Warrington bus station. River Reeves was recruited from a music course at a local college and meeting bassist Tomas Lowe at the town’s The Lounge venue completed the line-up. 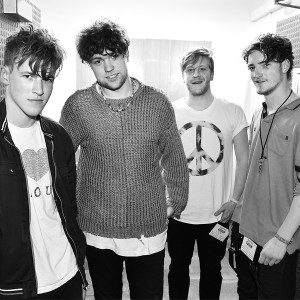 In 2015 Viola Beach were championed by BBC Introducing, performing at the Reading and Leeds Festival, and our very own Cavern Club, Sound City and Liverpool Music Week.

The lads were currently supporting Stockport’s Blossoms on a UK tour, due to conclude in March. The prestigious SXSW festival in Austin Texas was due to welcome them in a few weeks. Liverpool’s Sound City awaited the group in May as did LIMF 2016 in July.

Unashamedly indie pop, Viola Beach’s energy was refreshing; danceable, with a definite northern swagger, a cheeky bravado. The loss of these four heartbreakingly young men is a tragedy itself; but for local music, one can’t help but wonder what might have been.

“We can take on the world…” sings Kris, on Boys That Sing.
And they seemed on course to do exactly that.

By Cath Bore
Fore from Cath visit her blog https://cathbore.wordpress.com
—

As expected many tributes on social media including:

Curator of LIMF @MrYawOwusu
Very sad hearing the news about Viola Beach! A boss band with so much potential! But more than that, the loss of young lives is terrible.

@SoundCity
We are devastated to hear the tragic news regarding Viola Beach. Our thoughts are with their families.Unashamedly indie pop, Viola Beach’s energy was refreshing; danceable, with a definite northern swagger, a cheeky bravado. The loss of these four heartbreakingly young men is a tragedy itself; but for local music, one can’t help but wonder what might have been.

@theenemyband
RIP Viola Beach and their manager. Such incredibly tragic and sad news. Thought with the friends and families of all involved x

@ManandTheEcho
Just heard horrendous news about @Viola_Beach. Fellow Warrington lads, they rehearsed next door to us. Our thoughts are with their families.