Here's the Prime Ministers speech from Downing Street in full - The Guide Liverpool
Contact Us Advertise with The Guide Our Video Services Follow us:

Here’s the Prime Ministers speech from Downing Street in full

The Prime Minister marked his return to Downing Street with a statement outside Number 10 amid concerns about the Government’s response.

The UK is at the point of “maximum risk” in its battle with coronavirus, Boris Johnson said as he acknowledged frustrations over the continuing lockdown but insisted he would not risk a second peak in the disease by relaxing restrictions too quickly.

As the Prime Minister returned to take charge of the Government’s response to the coronavirus crisis following his recovery from Covid-19, he said there are signs that the UK is “passing through the peak” of the outbreak and “coming now to the end of the first phase of this conflict”.

Comparing the disease to a mugger, he said: “This is the moment when we have begun, together, to wrestle it to the floor.”

But he said it is also the moment of maximum risk because of the danger that people would look at the “apparent success” and “go easy” on social distancing measures.

It remains the “biggest single challenge this country has faced since the war”, he said, and “every day I know that this virus brings new sadness and mourning to households across the land”.

More than 20,000 people have already died with the disease in hospitals, with the true death toll including care homes and other settings likely to be far higher. 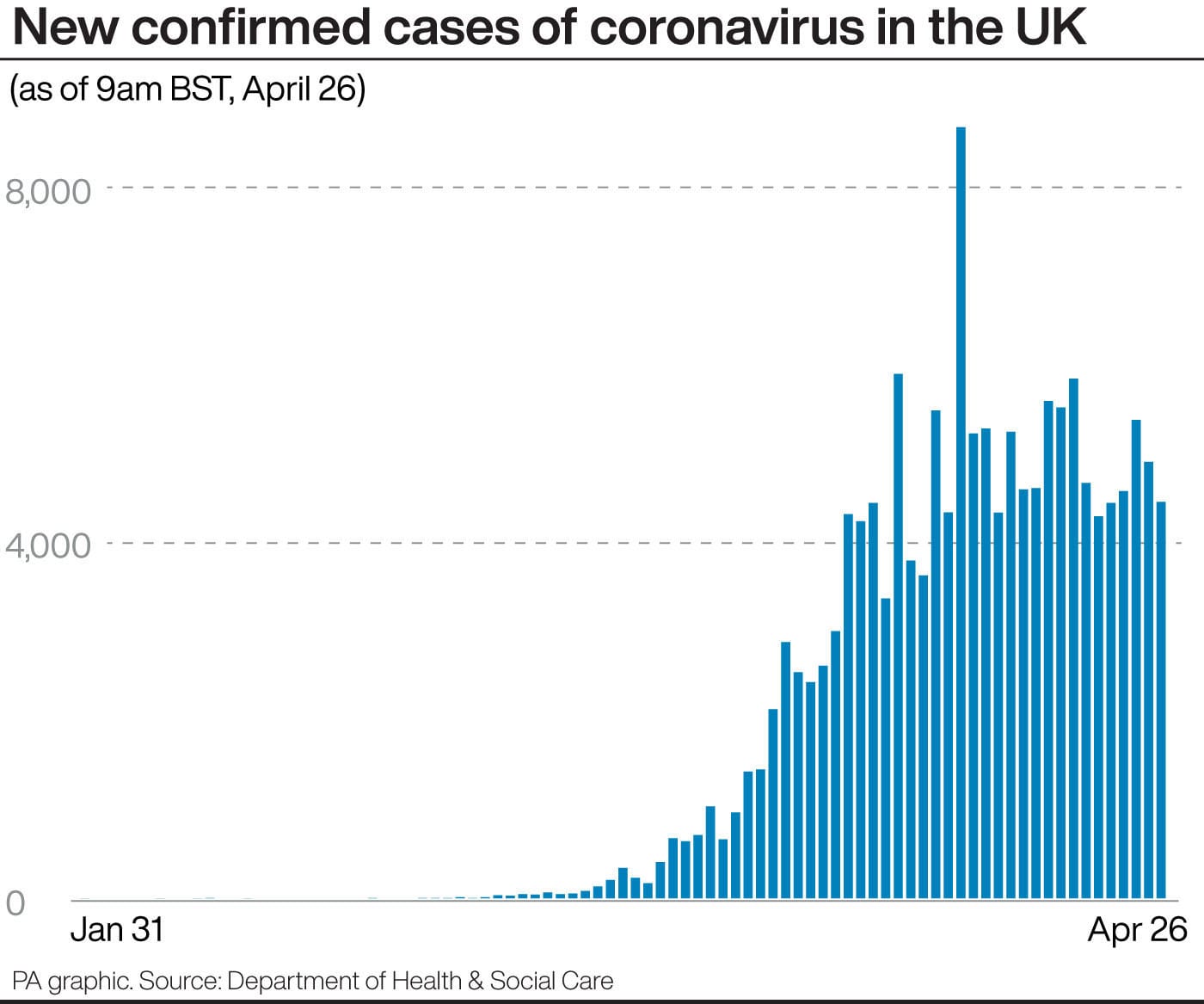 New confirmed cases of coronavirus in the UK.

Speaking from a podium in Downing Street, Mr Johnson acknowledged the pressure to lift some of the draconian restrictions imposed on British people and businesses.

He said: “I want to get this economy moving as fast as I can” but “I refuse to throw away all the effort and the sacrifice of the British people and to risk a second major outbreak and huge loss of life.”

The Prime Minister has been under intense pressure to set out how the lockdown will be lifted.

He indicated that it would be a gradual process and promised the “maximum possible transparency” with efforts to seek consensus across party lines.

He said: “When we are sure that this first phase is over and that we are meeting our five tests – deaths falling, NHS protected, rate of infection down, really sorting out the challenges of testing and PPE, avoiding a second peak – then that will be the time to move on to the second phase in which we continue to suppress the disease and keep the reproduction rate – the R rate – down, but begin gradually to refine the economic and social restrictions and one by one to fire up the engines of this vast UK economy.

“And in that process difficult judgments will be made and we simply cannot spell out now how fast or slow or even when those changes will be made, though clearly the Government will be saying much more about this in the coming days.”

The Prime Minister arrived back in Downing Street on Sunday evening after recuperating at Chequers following his discharge from hospital, where he had spent three nights in intensive care.

His return coincided with a growing clamour from senior Tories to begin lifting the lockdown amid mounting concern at the damage it is causing to the economy.

Sir Graham Brady, chairman of the Conservative backbench 1922 committee of MPs, told BBC Radio 4’s Westminster Hour there is a limit to how long people will tolerate restrictions, especially if they seem illogical. 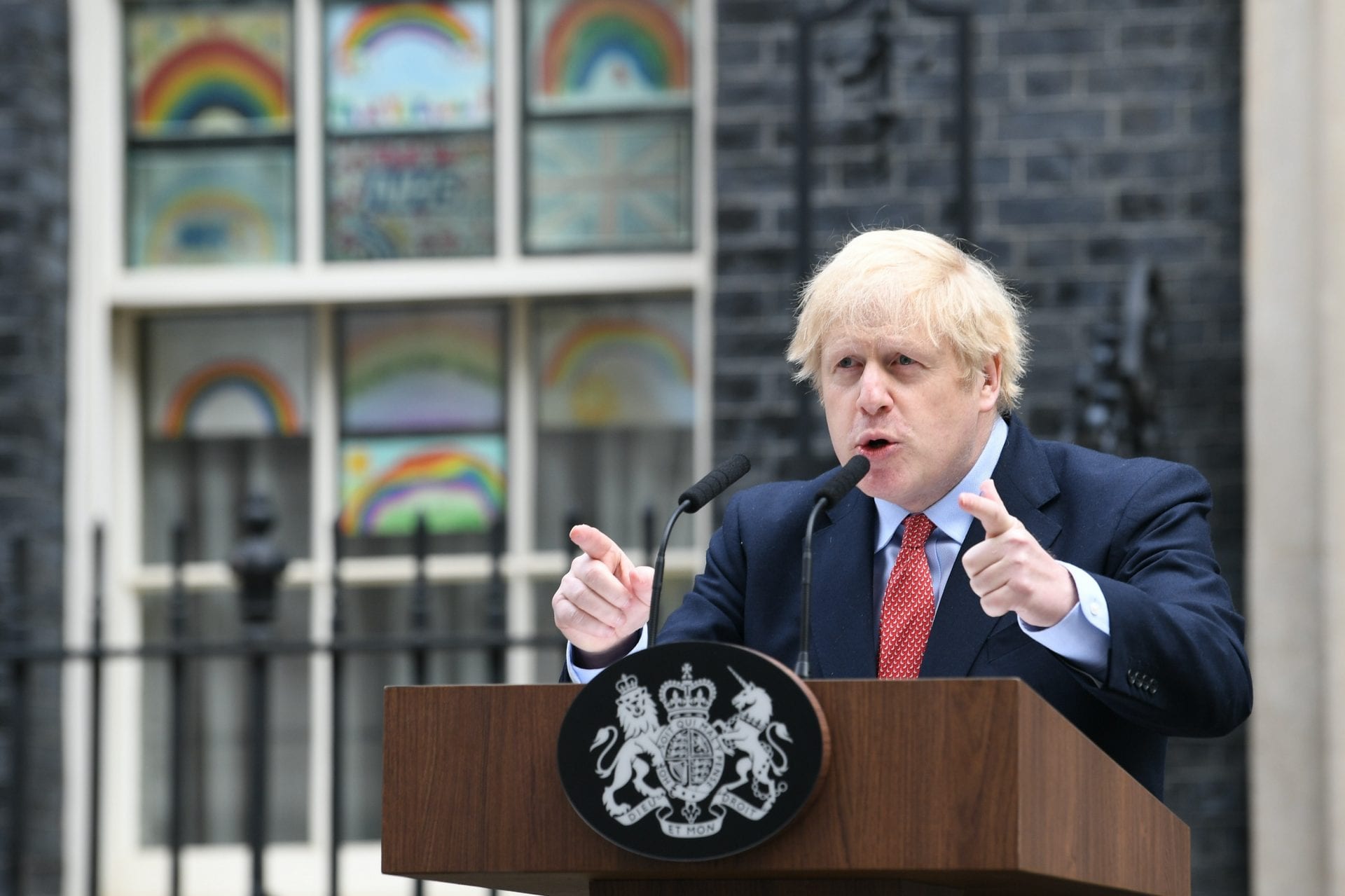 Labour leader Sir Keir Starmer – while backing the lockdown – has called for the Government to set out an “exit strategy” explaining how it will eventually be lifted.

Chancellor Rishi Sunak will face questions from MPs when he delivers a Commons statement on Monday afternoon on the economic crisis triggered by the virus.

The Prime Minister has less than two weeks before the next major decision point comes up with the next three-week review of the lockdown restrictions due on May 7.

It is thought that among the first restrictions to be eased could be a reopening of schools, although Foreign Secretary Dominic Raab – who had been deputising for Mr Johnson – said that would be “inconceivable” without some further measures in place.

Ministers are also thought to be considering allowing some non-essential businesses to open, such as garden centres and car showrooms, provided social distancing can be maintained.