Historic Liverpool bridge lights up Stanley Dock - The Guide Liverpool
Contact Us Advertise with The Guide Our Video Services Follow us: 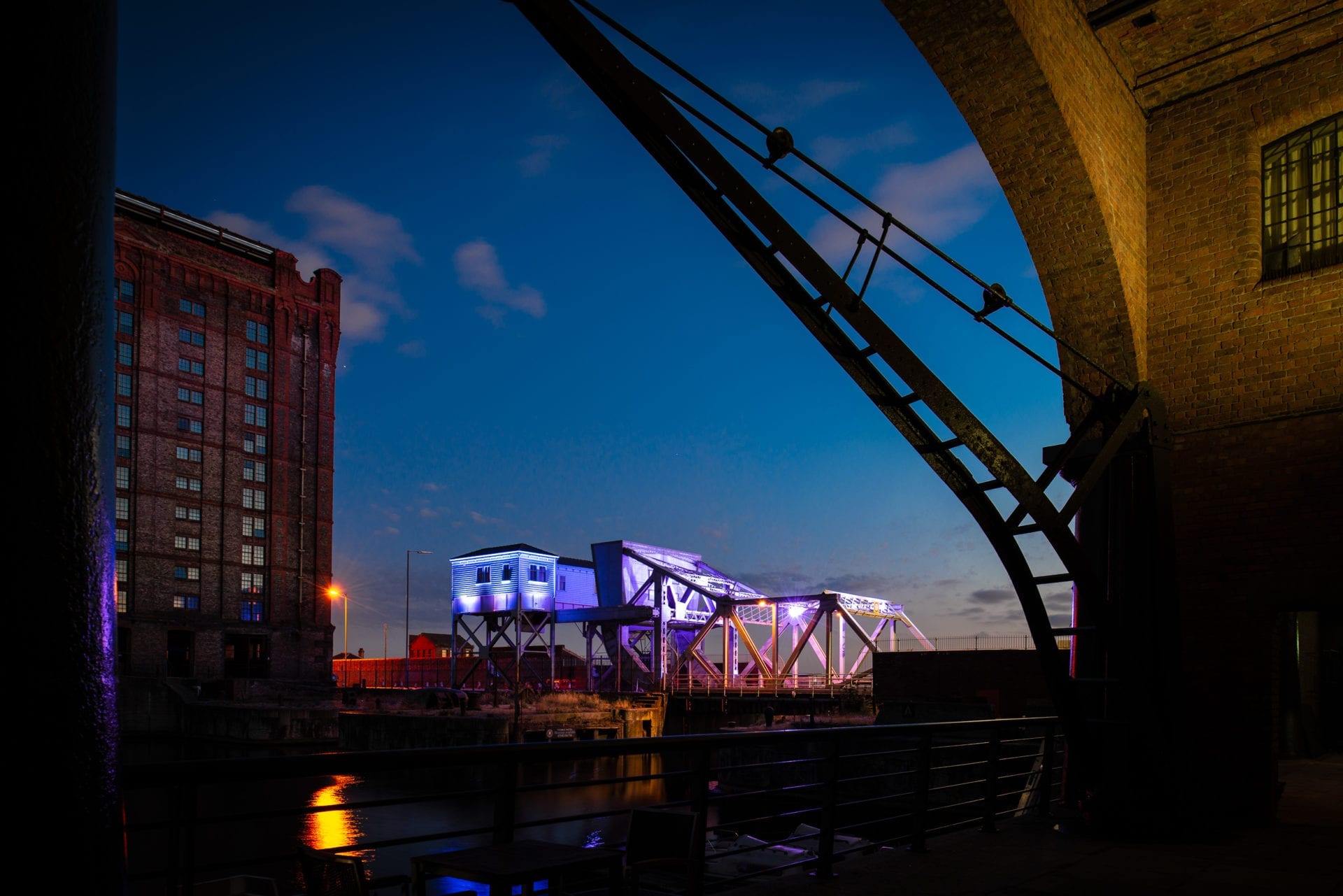 A famous landmark in Liverpool’s docklands can now be seen in a new light.

The historic Bascule Bridge on Regent Road, which crosses the historic Stanley Dock system, has had a new lighting system fitted to show off its unique engineering and architectural features in a multitude of different colours.

Built in 1932, the Grade II listed building, which lies within the city’s World Heritage Site, is one of just a handful in England and after a revamp in 2012 has gained fame for featuring in major Hollywood blockbusters such as Captain America and Sherlock Holmes.

The new lighting feature, fitted by Liverpool company MJ Quinn – who constructed a similar system to St Luke’s (the Bombed Out) Church last Autumn, has been installed as part of a £52m roadworks scheme to better connect the north of Liverpool to the city centre. 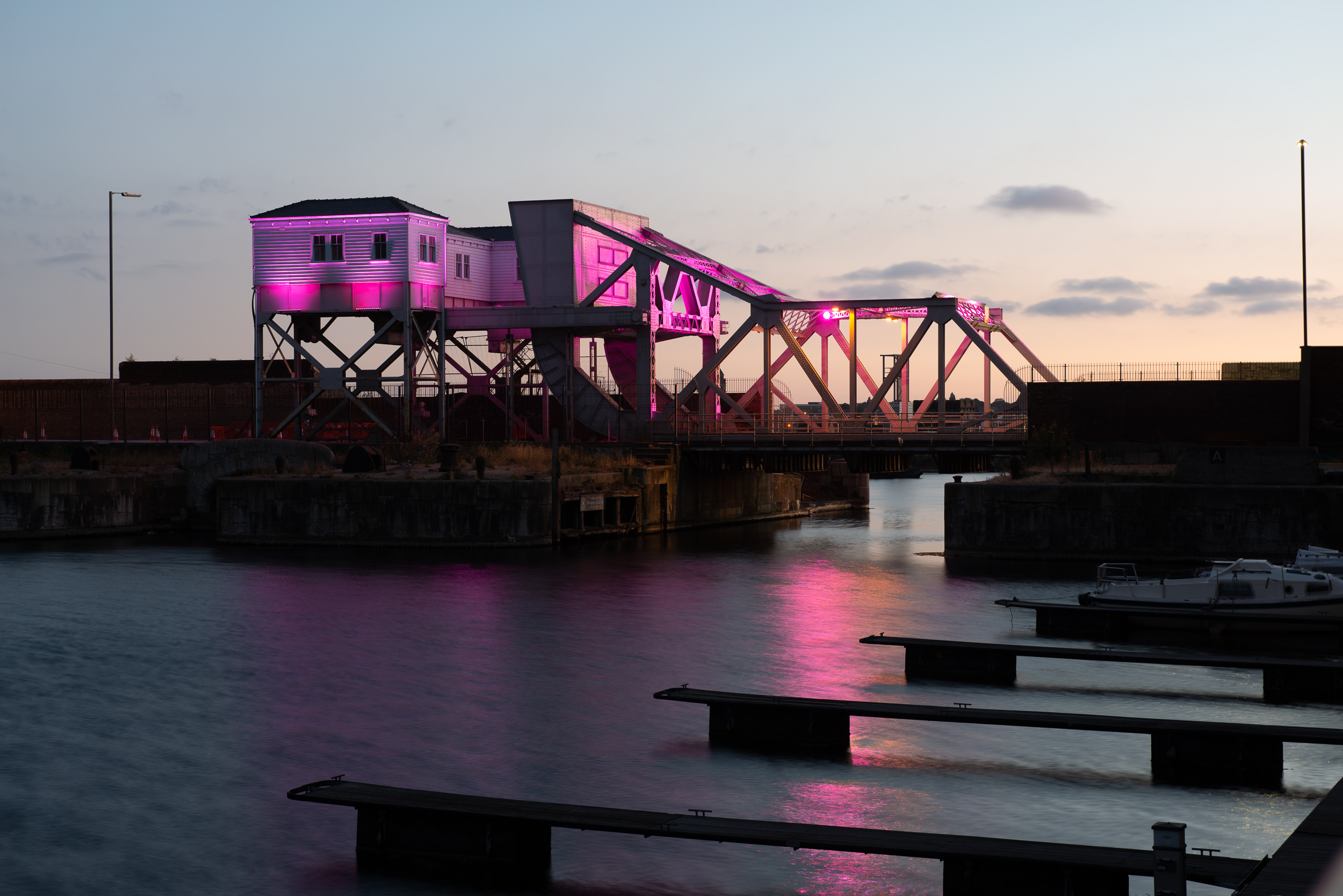 Councillor Joe Hanson, whose Kirkdale ward covers the area, championed the illumination of the bridge as one of the first environmental schemes to boost the recently created Ten Streets Creativity District.

Cllr Hanson said: “The Bascule Bridge at Stanley Dock is one of the jewels of Liverpool’s dock system and this new lighting scheme will make it truly shine as one of our great historical assets.

“There is a huge amount of activity going on around the bridge, not least in the highways investment by the council, and improvements like this will only enhance the growing appeal of the Ten Streets district.”

Ian Pollitt, Assistant Project Director, Liverpool Waters said: “The Peel Group is proud to have supported this initiative and partnered with Liverpool City Council to showcase the outstanding features of the historic Bascule Bridge. The Bridge is owned by Peel and is part of Liverpool Waters so it is important for us to invest in the care and maintenance of the bridge.

“Over the past 7 years The Peel Group has refurbished the bridge at a cost of £600,000. The new lighting system is really going to allow the people of Liverpool and visitors to the city to see the bridge in a new light.”

Contractors for the council, Geoffrey Osborne Ltd, are currently completing the first phase of improvements to Regent Road with the laying of new pavements and road resurfacing and new footpaths. The second phase which goes north of Bascule Bridge is scheduled to complete in summer 2019.

The improvements are seen as crucial for the wider regeneration of the area and also includes converting the A565 into a new dual carriageway. Part funded by the Liverpool City Region Growth Deal the project forms a major part of Liverpool City Council’s wider £500m Better Roads programme to improve the city’s road infrastructure.

These infrastructure works will be complemented by the creation of a further two new waterfront link roads, at the cost of £20m, at the city centre end of the A565, which are being built to support both the new cruise terminal and new £30m Isle Of Man Cruise terminal.

The first phase of the A565 upgrade was completed by Graham Construction in September 2017 after a year-long road closure enabled the £10m replacement of the Great Howard Street bridge, so it could handle more freight tonnage for the Liverpool2 deep water container terminal.