Hoylake RNLI hovercraft in three emergency launches during weekend heatwave - The Guide Liverpool
Contact Us Advertise with The Guide Our Video Services Follow us:

Hoylake RNLI’s volunteer crew had a busy weekend as temperatures soared during the recent heatwave, with three call-outs for the Wirral lifeboat station’s Inshore Rescue Hovercraft.

On Friday 12 August at 4.00pm, Hoylake RNLI hovercraft was requested to launch by the UK Coastguard when a canoeist and kayaker were swept out to sea off the north Wirral coast.

RNLI Wirral Lifeguards had been monitoring the pair and raised alarm when they appeared to be struggling to return to shore against the ebbing tide and were drifting towards the Burbo Bank Wind Farm.

The hovercraft Hurley Spirit and her volunteer crew launched and headed out to the casualties’ reported location around 1.5 miles offshore. They were both soon found and brought on board the hovercraft with their equipment. Both casualties were safe and well and required no medical assistance.

The RNLI hovercraft flew them to Leasowe Beach, where they were passed to the Wirral Coastguard Rescue Team and RNLI lifeguards, before the hovercraft stood down.

The following morning (Saturday 13 August) at 9.51am, the hovercraft was tasked to reports of a person cut off by the incoming tide in Leasowe Bay. Fortunately, the casualty was able to make their way safely ashore and the hovercraft stood down shortly after launching. 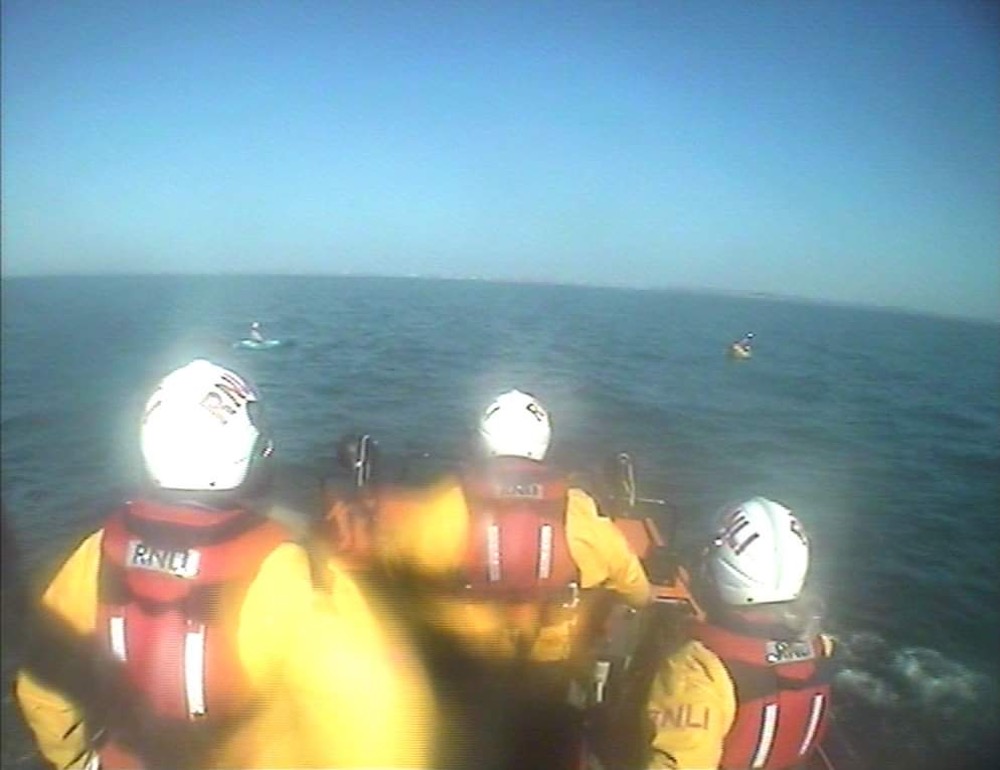 On Sunday 14 August at 12:41pm, the Hoylake RNLI hovercraft was requested to launch to reports of several people cut off by the flooding tide between Middle Eye and Little Eye in the Dee Estuary. The hovercraft launched and once on scene at the south end of Middle Eye, located a two-person kayak which was in no difficulty.

There was nobody else in the area of the original report and the hovercraft crew met up with an RNLI Wirral Lifeguards rescue watercraft (RWC). The lifeguard confirmed that there was nobody in difficulty south of Little Eye. The hovercraft and RWC then checked all around the Hilbre Islands and although there were over 20 paddle boarders and kayakers in the area, there was nobody requiring assistance. The incident was concluded as a false alarm with good intent.

Last week’s hot weather saw the Hoylake RNLI hovercraft responding to five incidents in total, including the weekend’s launches. The lifesaving charity’s volunteer crew are on call 24 hours a day, 365 days a year.

“Although we’re seeing cooler weather on the way, our coast is still very popular and we urge everyone to stay safe and respect the water. Always check the tide times and weather forecasts and plan ahead to make it home safely. In an emergency at the coast, call 999 and ask for the Coastguard”

Howie added: “We’ve seen a huge increase in people taking to the open water on stand up paddle boards, kayaks and other water sports equipment and it’s important to know the risks, as the sea can be unpredictable. Avoid going out during ebbing tides and offshore winds, know your limits, and don’t go out in conditions you can’t handle.”

‘If you’re heading out on the water, tell someone where you’re going and when you’ll be back. Most importantly, always wear a personal flotation device and keep a way of calling for help attached to you in a waterproof pouch or pocket at all times.’

Find more RNLI safety advice for your activity at rnli.org/safety/choose-your-activity