"Imminent" support is needed for hospitality within 24 hours says restaurant owners - The Guide Liverpool
Contact Us Advertise with The Guide Our Video Services Follow us:

UK Hospitality the body that represents restaurants in the country have said ‘as many as 10,000 sites’ could close if support is not announced imminently.

Hospitality bosses have warned that hospitality firms need support “in the next 24 hours” as venues prepare to shut their doors in the face of dwindling customer numbers.

The operator of the Real Greek and Franco Manca restaurant chains called for emergency rescue packages regardless of whether the Government introduces new measures to stop the spread of Covid.

Meanwhile, the boss of trade body UKHospitality said “as many as 10,000 sites” could close if support is not announced imminently.

Liverpool’s Paul Askew who owns Art School restaurant says stories of cancellations are rife across the city after restaurants have already “climbed a mountain over the last few months” are now sloping back down. Watch the full interview with Paul below.

At the end of last week, the Chancellor Rishi Sunak held talks with hospitality bosses but has stopped short of offering renewed funding support to companies who have witnessed mass cancellations and weak footfall.

London’s West End saw shopper numbers plunge by 17% against pre-pandemic levels over the weekend as cautious people chose to remain at home.

“With less than five days to go until Christmas day and the probabilities of a circuit-breaker lockdown increasingly on the horizon, the retail and leisure sector is now facing a huge amount of financial uncertainty when it should be enjoying a much-needed shot in the arm,” said Jace Tyrrell, CEO of the New West End Company. 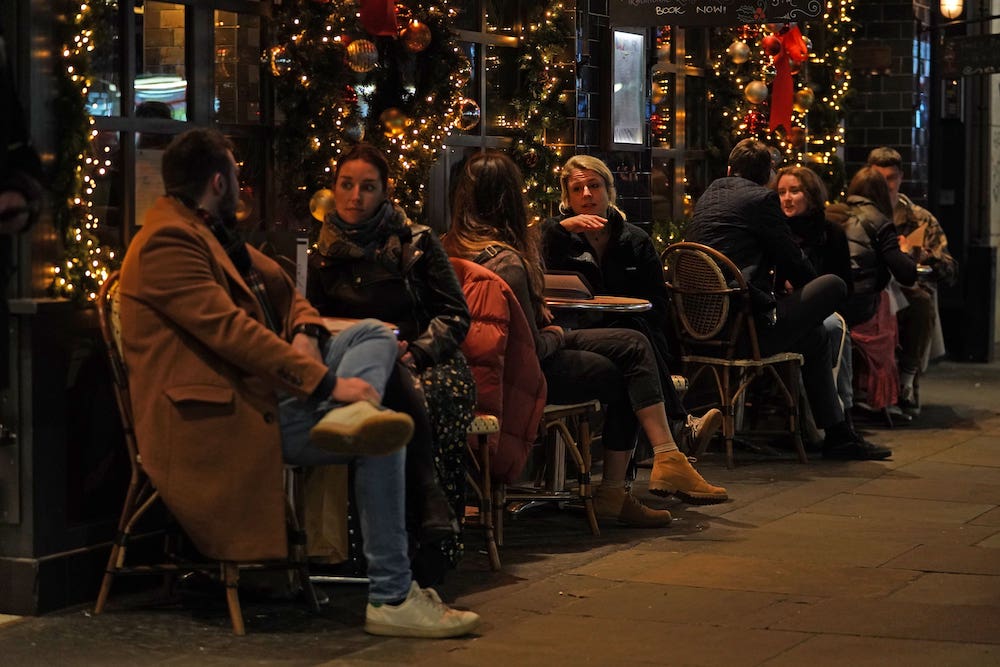 He said: “The Chancellor, Rishi, needs to do something very, very quickly because I am not sure any of the Cabinet understands cashflow.

“And cashflow is the problem at the moment, of the last week or two and of the next 10 days, near London, and near the city centres.

“These businesses have no cashflow, they are paying staff, they have got to pay their suppliers.

“It’s a bit of a disaster area for smaller businesses over the last two weeks, so Rishi needs to do something in the next 24 hours, I think.”

Meanwhile, Kate Nicholls, chief executive officer of UKHospitality, told the Telegraph that as many as 10,000 sites could shut their doors without imminent support.

In a statement, she added: “Trading has already been hugely damaged by the steady stream of pessimistic news following the discovery of the Omicron variant, at a time when hospitality would normally expect to be making a quarter of its annual profits.

“We know from previous lockdowns that it causes venues to haemorrhage cash.

“It costs £10,000 to close each site and a subsequent £10,000 per month on overheads, and that was with full furlough and rate relief.

“Trading levels are so poor that the need for proportionate Government support is already acute, and urgently necessary if businesses, jobs and livelihoods are to be secured.”

The trade body chief has urged for business rates relief and a reduction in VAT to help firms now, as well as guidance over what measures could be put in place.