“It’s going to be a bloody great night” We speak to comedian Rosie Jones ahead of her Homotopia festival gig - The Guide Liverpool
Contact Us Advertise with The Guide Our Video Services Follow us:

Comedian Rosie Jones is delighted to be gigging in front of a live audience again and she’s doubly excited to be starring in Queer, As In Funny, at the Capstone Theatre this Saturday.

Part of this year’s Homotopia festival, it’s a celebration of ‘some of the funniest LGBTQIA people of the planet’ – which means the 8 Out Of 10 Cats, The Last Leg and Live at the Apollo star just had to be there.

“It’s going to be a bloody great night,” says Rosie, “because I’m a gay woman and proud to be gay, and it’s just great to have an evening where every act is Gender Queer Spectrum, and we go ‘hello, this is something about us’.

“Even now people say why do we need Pride or Queer Events, and we absolutely still do. There’s still a lot to be done in terms of homophobia but, also, it’s great to have an evening altogether, embracing our queer family.” 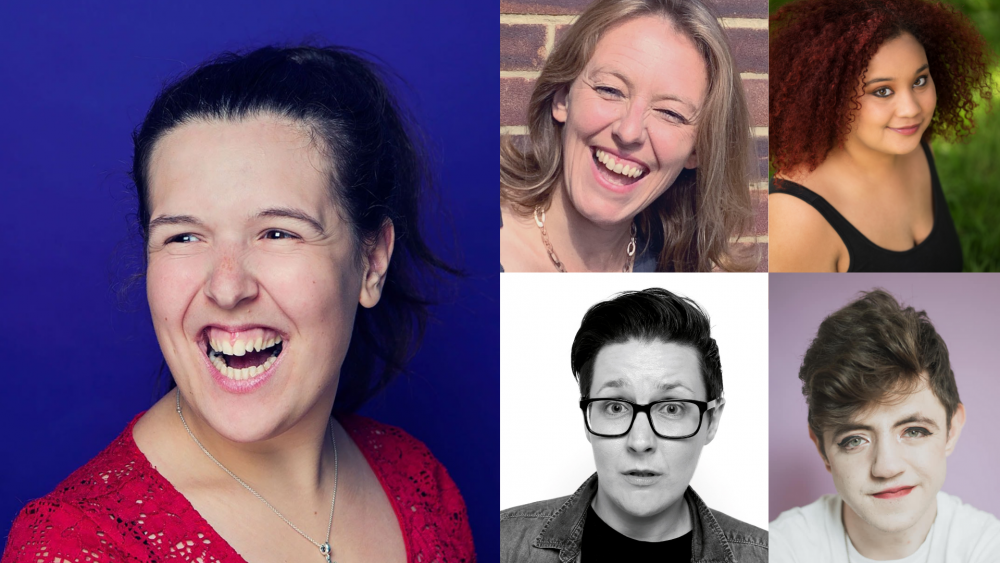 Although she adds: “It doesn’t matter if you’re gay, queer or straight, you’re just going to watch a group of funny people. It’s going to be a really funny, really good, hoot of an evening.”

It’s hard to believe around five years ago not so many of us had heard of Rosie Jones, but the 31-year-old from Bridlington has made a huge impact since, as a panellist on some of Channel 4’s top TV shows, doing stand-up, starring in her own primetime travel show – Trip Hazard: My Great British Adventure – and even appearing on BBC1’s Question Time (more later).

She made the leap from TV researcher for panel shows – and dramas, working briefly on Hollyoaks and living in Liverpool – to appearing on them, something she never expected she’d be able to do.

“When I used to envisage my adulthood, it was just me working in a corner shop, that my mum and dad would drive me to and pick me up from. I could never imagine living on my own and having a job I wanted to do,” she says.

The barrier, she thought, was cerebral palsy which affects her movement and her speech. But whether it was her sense of humour, or the determination that burns fiercely within, that was one of many she has broken down, or aims to.

“Growing up I always had a disability and, quite early on, I found that people underestimated me, or felt awkward around me, or didn’t know how to treat me,” she says. “Incredibly young, I found that in order to get over that, humour was a great way. If I cracked a joke about myself and my disability, you’d see a spark in that person’s eyes, when they realised that just because I wobbled and I spoke slowly, intellectually there was absolutely nothing wrong.

“Humour played a massive part in breaking the tension. But then running alongside that, growing up I would turn the telly on, and open a magazine, and I would rarely see anyone disabled. So I felt quite alone in who I was – but I was always so determined, and stubborn, and ambitious, and I knew that I wanted to be the best version of myself that I could be.

“When I went to university I thought, how can I make a difference? Should I be a lawyer or a politician, but no they’re a bit boring. Then I turned to TV because, back to comedy and humour, I thought the best way I can make a difference is to go into telly to show disabled people are just like everyone else.” 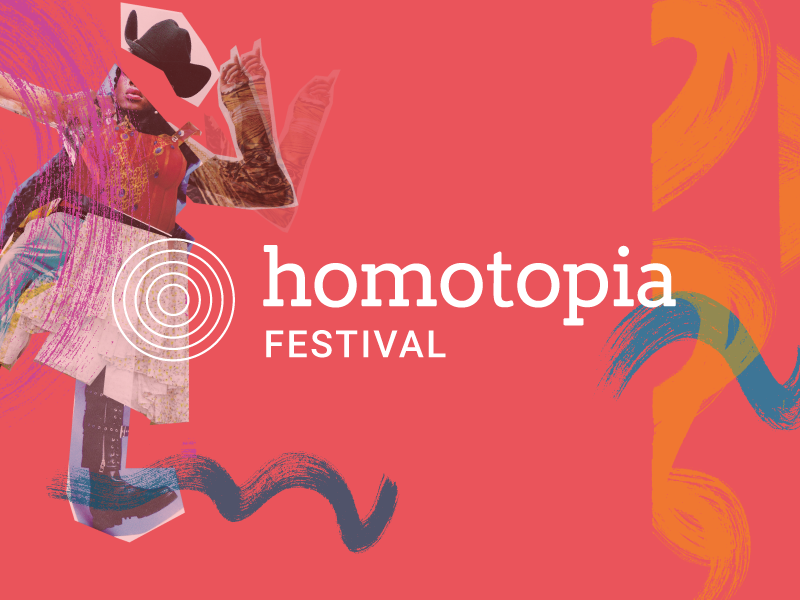 She loved her job as a researcher and ‘having a little bit of power’ but, with the realisation that in terms of comedy, there was still no-one ‘like her’, she decided to give it a go. “To perform stand-up myself was always a secret dream but I thought I couldn’t do it because of my speech, that everybody would get to the punchline before I did.

“Then I realised, if I was a little bit clever, I could use that in my favour. Sure they could get to A punchline, but it wouldn’t be THE punchline. I’d use what I perceived to be my weakness as my strength. And it’s gone a bit bloody well…”

She still has to fight against the restrictions society places on her, and against ignorance.

Rosie recently appeared on Question Time and was subjected to appalling online abuse afterwards, about her appearance and her disability. But such a negative response sadly didn’t surprise her, and only served to strengthen her resolve: “There are nasty people out there. I get abuse every single day, but I know it comes from a place of anger and sadness in themselves, and I am lucky that I have such a strong friendship group and the greatest family in the world, and I’m surrounded by love.

“It will never stop me or silence me. If anything it makes me more determined to speak out and speak up for all minorities. If you are diverse, you deserve to have a voice; we’re here, don’t abuse us, don’t patronise us.”

It is this same resolve with which Rosie speaks about her sexuality, and that of others.

“Even a year ago if I was doing a gig or an interview, I’d think, am I disabled today or am I gay, because I can’t be both. I am passionate about intersectionality because I spent a lot of my life trying to fit into different boxes in society and, growing up in the ‘90s, that was hard. 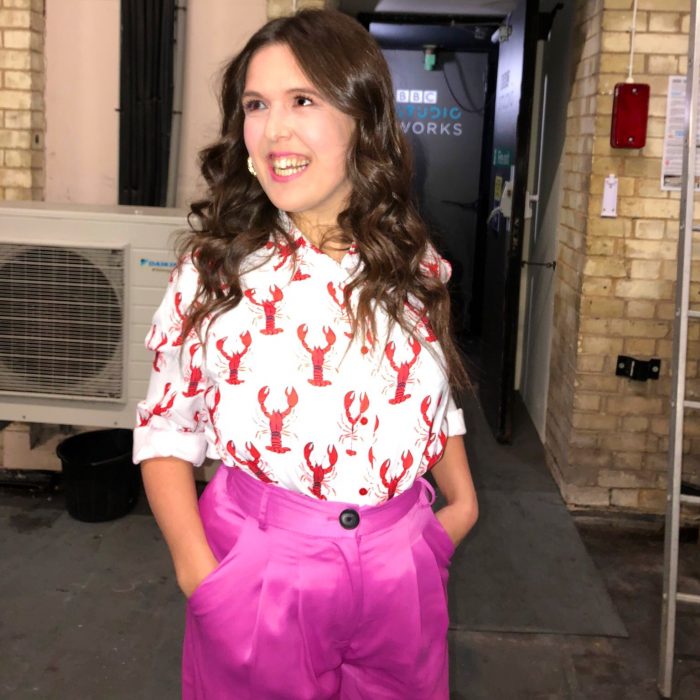 “No-one knew there was intersectionality and I feel like you got one label and my label was disabled so all my other labels had to go by the wayside, my sexuality and, even, my gender.

“When I progressed in my career and came to the age of being more confident in myself, I realised I’m not disabled, I’m not gay…I’m a woman, I’m Rosie. Rosie encompasses all of that.

“It’s like when I come to Liverpool. Yes, it’s a gay gig, but it doesn’t mean I leave my disabled label at the door. I love who I am, and I’m proud to represent all these amazing, different sectionalities.”

Rosie is currently writing her second children’s book, she’s got an acting role in the pipeline but daren’t say too much yet, and she’s got many more comedy appearances and TV work lined up.

“I’m so busy but I’m loving it,” she smiles. “I feel like I’m in a really privileged position.

“I got cerebral palsy because when I was born, I didn’t breathe for nearly 20 minutes. I nearly died. I give everything 100% because there’s a world in which I didn’t start breathing and wouldn’t be here. I have always been aware that we only live once, and I just want to make the most of it.”