Soul Inspired Events are excited to announce the return of Soul4Soul at their new home of The Magnet in Liverpool on Sunday, June 12th 2016.

After five years at the historic Studio 2 on Parr Street, Soul4Soul regenerates at Magnet (Hardman St) with headliner JC Villafan.

Based in Los Angeles, JC Villafan began his musical career in coffee shops and neighbourhood venues. Along with his evocative sense of lyricism and expressive guitar work, his charming stage presence and soulful vocal ability captivated a local fan base which has now expanded internationally. He is in the UK to promote his debut album America’s for Dreamers.

Joining JC Villafan will be Neil Noa. Born and bred in the cultural hub of Liverpool, Neil Noa is an exciting multi-instrumentalist playing guitar, keys and vocals. He recently took a break from music to focus on developing a style with roots in electronic music with a hint of folk layered with soulful vocals. Forever Gone, the stand out track from his forthcoming EP, was recently shortlisted from 6,000 other artists for Glastonbury 2016.

Soul4Soul has been running for 5 years and is Liverpool’s premier live Soulful Music event, offering a platform to some of the best up and coming soulful artists. In the last 5 years we have featured artists such as JP Cooper, Lauren Housley, Ayanna Witter Johnson, Mic Lowry, Kristyna Myles, Esco Williams and many more. 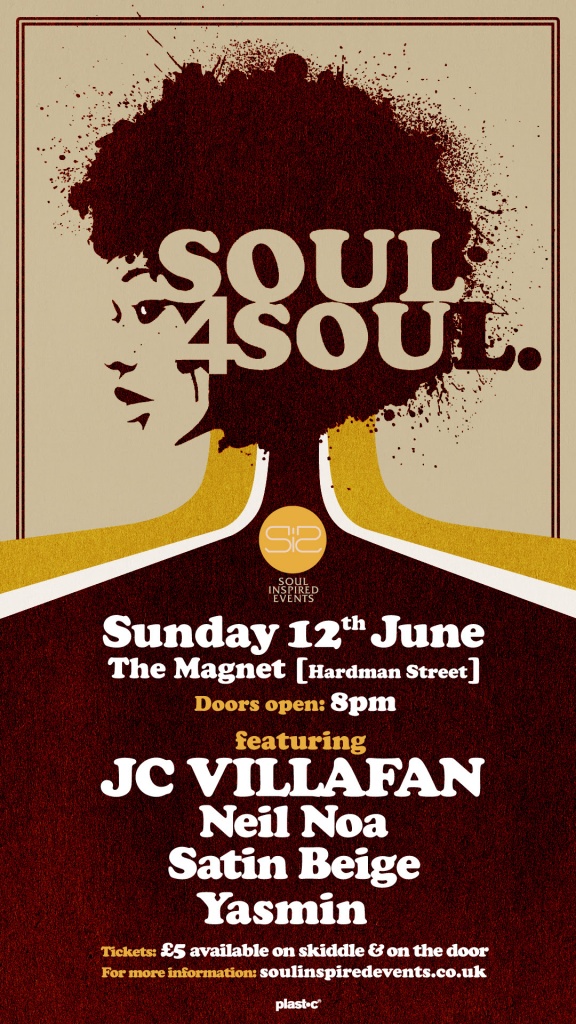 Tickets (£5 available via Skiddle or on the doors)