Jodie Comer says filming last scenes of Killing Eve is "surreal" - The Guide Liverpool
Contact Us Advertise with The Guide Our Video Services Follow us:

Jodie Comer has said it is “surreal” to be working on the final episodes of Killing Eve.

The popular cat-and-mouse thriller, starring Comer as Russian assassin Villanelle and Sandra Oh as now-former MI5 agent Eve Polastri, will end with its fourth series, due to premiere on BBC One and BBC iPlayer in 2022.

Appearing on This Morning, Comer told presenters Phillip Schofield and Holly Willoughby she is about to start filming the final two episodes.

She said: “It’s very surreal. We’re just about to start the final two episodes, so it’s crazy. It’s been four years of all of our lives and we just want to make sure that we end it on a good note that’s satisfying for the audience but also is truthful to the characters.”

The 28-year-old from Woolton has received critical acclaim for the role, winning the leading actress TV Bafta in 2019 and also an Emmy.

MORE - Summer may be over but it’s BBQ season all year round at Smoke & Dough, Liverpool ONE

Asked about the possibility of the series being turned into a film, Comer said: “I don’t think so, I think they’re kind of keeping their options open. Who knows what the future holds, but for sure, the thing that I will miss the most is not having to apologise for anything.

“You know, all the mischief that I get away with, there’s something just so fun about that.”

Comer appeared on This Morning alongside her friend Stephen Graham, with whom she stars in Channel 4 drama Help, which airs on September 16.

Written by Jack Thorne and directed by Marc Munden, Help is set in a fictional Liverpool care home in spring 2020.

It tells the moving story of the relationship between a young care home worker, Sarah (played by Comer), and a patient named Tony (played by Graham), a 47-year-old man with young-onset Alzheimer’s whose lives are changed forever by the coronavirus pandemic.

While accepting her Bafta in 2019, Comer famously thanked Graham saying: “If I didn’t owe you a pint before, I definitely do now. Thank you for the generosity that you showed me all them years ago.”

Asked about the part he played in Jodie’s career, Stephen said: “She says some wonderful things, but I personally believe her destiny was already there.

“She’s an amazing talent and if I was part of helping that process move smoothly then that’s a blessing itself.

“But for me as well, what I wanted to do with this is that there’s been some iconic Liverpudlian roles, from Educating Rita and Shirley Valentine, I wanted Jodie to do it in her own accent and stick her flag in the ground, because I think it’s a beautiful performance.” 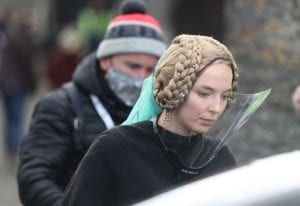 Jodie has recently appeared on the big screen alongside Ryan Reynolds in Free Guy and later this year will be seen in Sir Ridley Scott’s eagerly awaited historical epic The Last Duel.

Also starring Matt Damon, Ben Affleck and Adam Driver, she stars as a noblewoman in 14th century France who alleges she was raped by her husband’s best friend.

Help airs on Channel 4 on September 16 at 9pm and will then be available to stream on All 4.