LFC partner Levi’s®, has created three exclusive trucker jackets and limited-edition t-shirts - The Guide Liverpool
Contact Us Advertise with The Guide Our Video Services Follow us:

The products are inspired by season-defining moments and memories from LFC players Andrew Robertson, Alex Oxlade-Chamberlain and Divock Origi and have pieces of the actual goal net from the Kop end integrated into the design. All proceeds raised from the collection will go to LFC’s official charity, LFC Foundation, and LFC’s community team, Red Neighbours, to help fund local community pantries in Liverpool through its COVID-19 recovery response work. 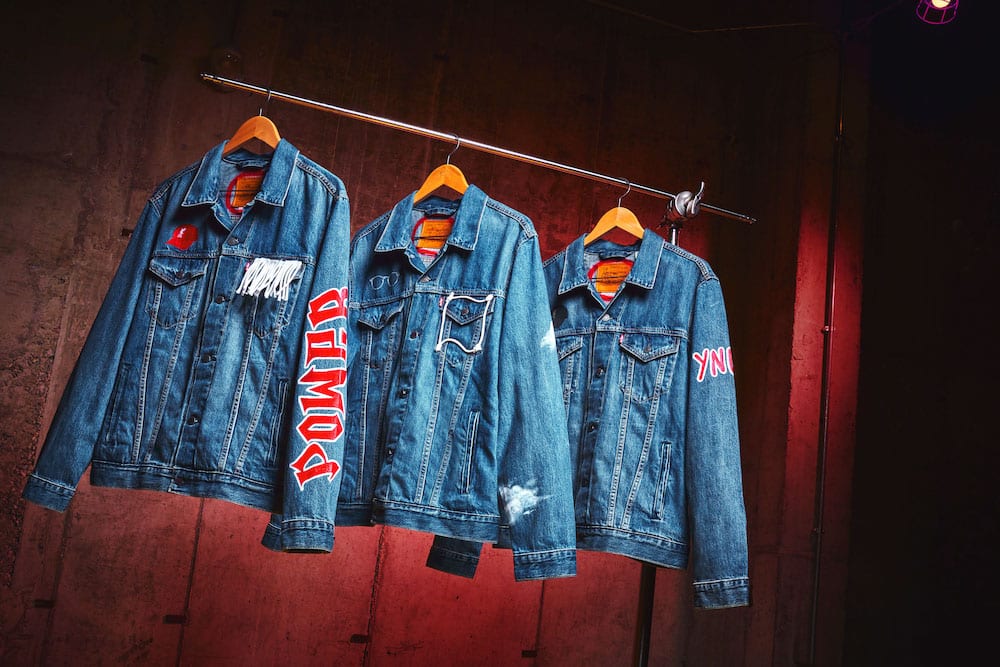 The Levi’s® x LFC trucker jackets each carry a bespoke design representing highlight moments chosen by three members of the first-team squad. The designs were hand-painted by the street-artist behind the famous Jurgen Klopp and Trent Alexander Arnold murals in Merseyside, Akse.

“He’s got the Dad look down to a tee. He’s the cool Dad. At the Christmas party he’s rocking up in a nice pair of skinny jeans, shirt with a little bit of chest hair poking through, a jacket and a pair of clean white trainers. He keeps it fresh and cool. The glasses and the rugged beard, the hair is flowing. He knows where he’s at, he sticks to it and he rocks it well.”

Liverpool full-back Andrew Robertson commented when discussing his season highlight, his header in the 2-1 victory over Aston Villa at Villa Park:

“I don’t score many goals, especially with my head! It’s amazing what happens when you close your eyes and hope for the best. We were losing going into the final minutes, I got the equaliser and Sadio then did what Sadio does best and popped up with the winner. That weekend was a massive result for us and kept our momentum going.”

Striker Divock Origi, when asked who out of the three of them was the best dressed, said:

“I’d say confidently that is me. I’m quite progressive and into my fashion. Day-to-day clothing I’d say Alex (Oxlade-Chamberlain). Worst dressed in the squad – Robbo (Andy Robertson) or Milly (James Milner), they don’t take any risks. If they took more risks I’d give them more points.” 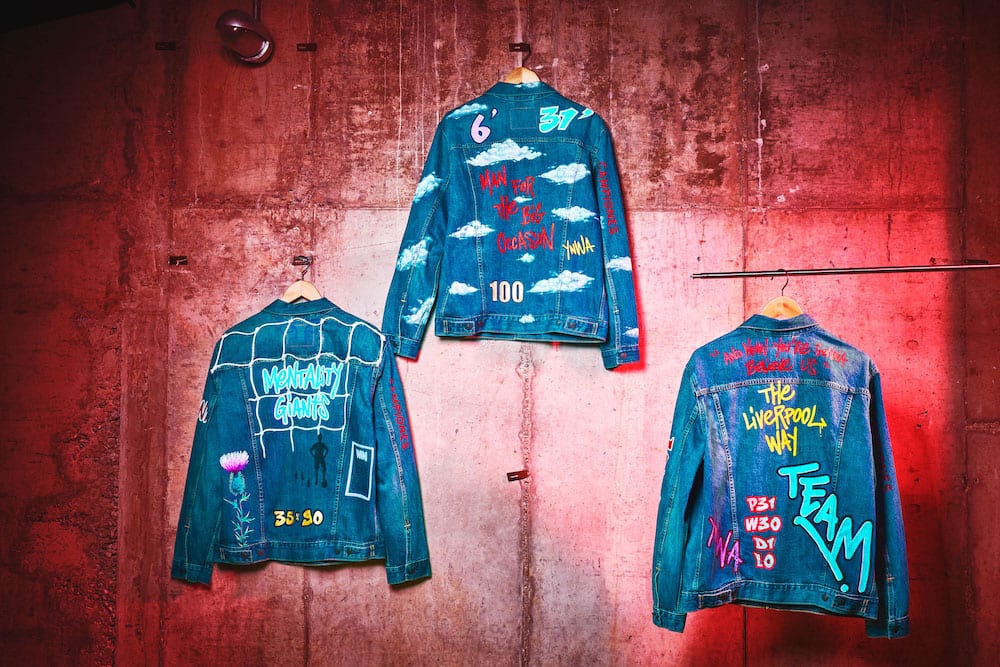 Midfielder Alex Oxlade-Chamberlain chose the 2-0 victory over Manchester United at Anfield as his season highlight saying:

“I remember thinking after the game we’re really onto something here – this is big. We were delighted when we all got back into the changing room with not just the result, but the way we played. We played the Liverpool way that day – we dominated.”

“The designs are a celebration of an incredible season in a way that only Levi’s® and the spirit of the players could bring to life. Each trucker jacket doesn’t just remember one moment from the season, they commemorate the character the players, club and supporters. This is a celebration for the whole LFC family and a collection fans can wear with pride.”

One of the trucker jackets will be on display in the Levi’s® Liverpool ONE store for the next week with fans able to win one of the truckers by entering a prize draw. Each jacket will be delivered to the winners with a certificate of authenticity and will be gift-wrapped in part of the Kop End goal-net, making them a truly money-can’t-buy memento for an unforgettable season.

All proceeds from the draw will be donated to the LFC Foundation, to help fund local community pantries in Liverpool through its COVID-19 recovery response work that provides vital food supplies to the most high-need communities in Liverpool. To enter, visit the website here.

“LFC strives to be a good neighbour and support its local communities. Food poverty unfortunately is an ongoing issue that our communities face and this has worsened due to the recent coronavirus outbreak. Therefore, food poverty is one of the focus areas of our COVID-19 recovery response work, and community pantries form an important part of this as they provide vital assistance to local residents who are struggling.” 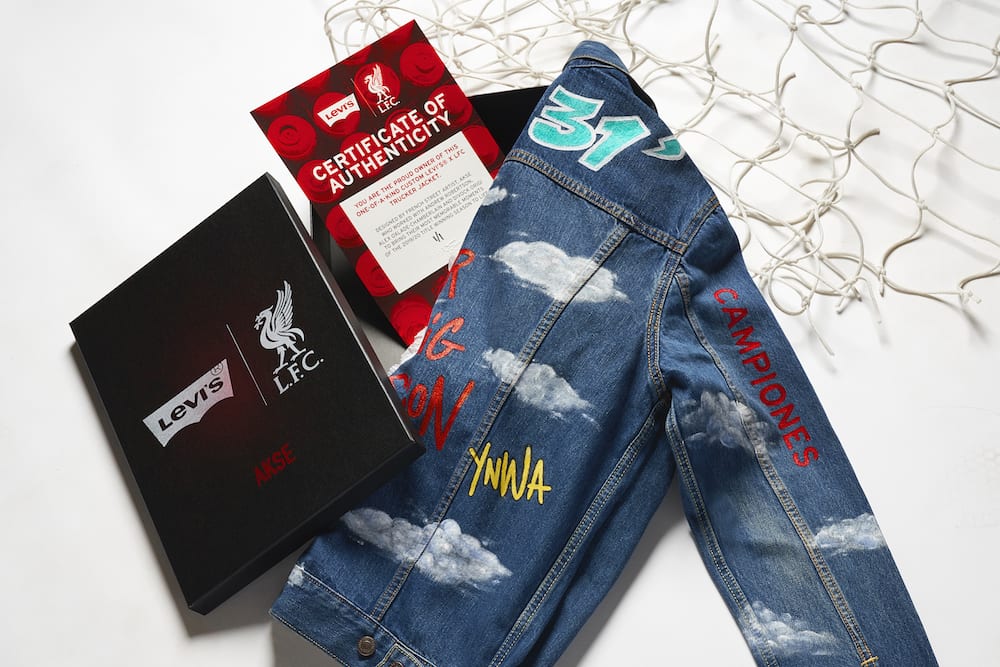 “Anfield is made up of some of the most disadvantaged postcodes in the UK and the funds generated from the Levi’s® x LFC limited-edition trucker collection will go a long way to supporting hundreds of families in need,”said Matt Parish, LFC Foundation, Director.

For supporters not lucky enough to win one of the three trucker jackets, a single illustration combining the three trucker jacket designs has been created for an exclusive t-shirt design, available for fans to print in-store at the Levi’s® Print Bar. The tees will be available from July 24th in the Levi’s® L1 store in Liverpool and the Regent Street store in London, with all sales proceeds also going to the club’s official charity, LFC Foundation, to support community pantries across Liverpool as part of LFC’s COVID-19 recovery response work. 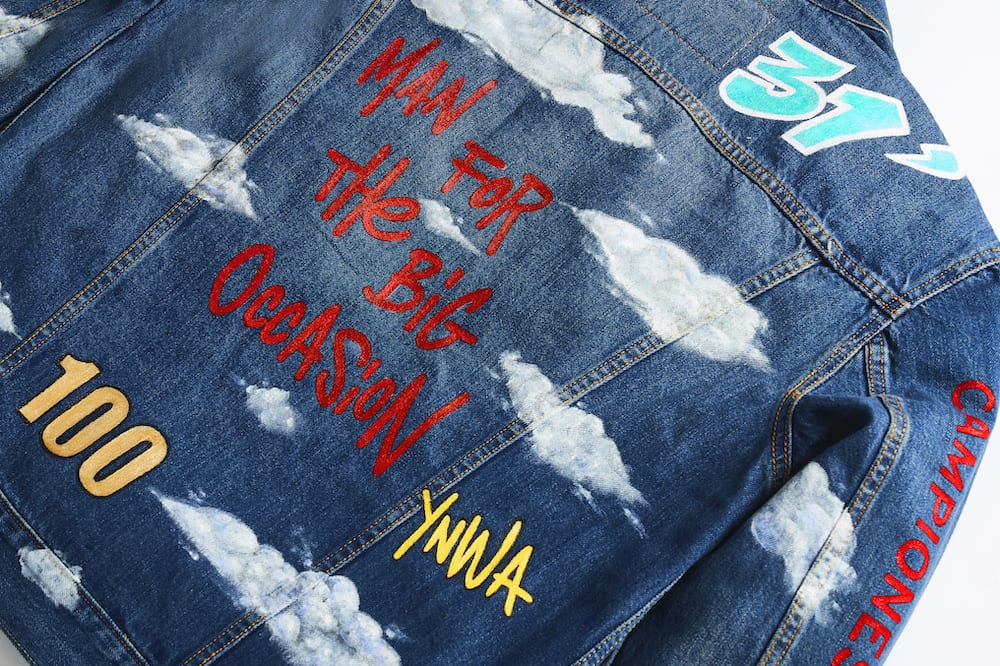 “We’re proud to be a partner of the new Premier League Champions.  As a brand, red is very important to us, it’s in our fabric and it was only right that we mark their incredible season with a collection for supporters. The 2019/20 season will live long in the memory of those associated with the Club and the trucker jackets and t-shirts are just another way for the LFC family to celebrate together.”