Liverpool auction nets £100,000 for David Gest celebrity haul - The Guide Liverpool
Contact Us Advertise with The Guide Our Video Services Follow us:

A collection of more than 800 items owned by US music producer and television personality David Gest raised more than £100,000 at auction.

Bids for a total of 870 items came from all over the globe including America, Australia and the UK.

The top seller was a signed photograph of Michael Jackson which made £1,900 with another picture of Jackson inscribed to David Gest by the late singer fetching £1,700.

John Crane, founder and proprietor of Cate Crane Auctioneers in Liverpool who organised the sale, said: “It’s always an unknown quantity when auctioneers put on a one-vendor sale and they are incredibly successful or a total disaster.

“But we have never had a flop in 35 years so we felt we were on fairly safe ground, and it would appear that interest in pop memorabilia is still great.”

He added: “I met David Gest a few years ago to view the collection and this was a collection put together very carefully by him, it wasn’t random hoarding, every item had been bought for a reason and so there was a common theme.

“Items were generally bought either because of people he knew, people he came across or those he worked with.”

It had taken a year to sort out and catalogue the items which had been in three storage units in Liverpool where Gest, who died in 2016, had an apartment overlooking Sefton Park. 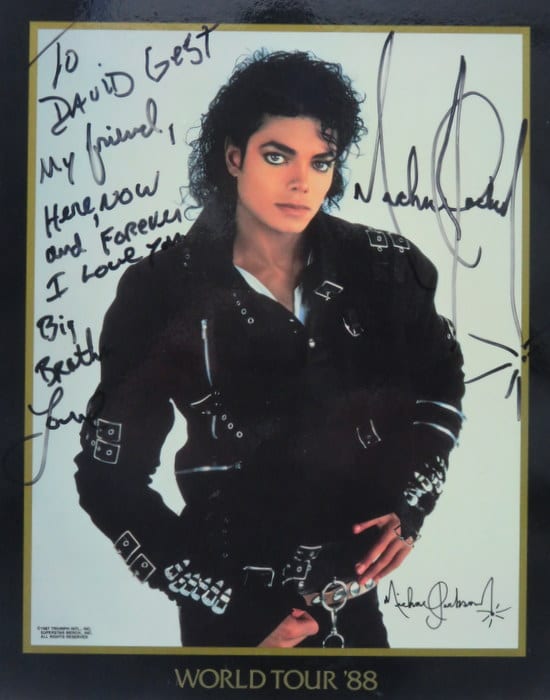 Gest rose to fame after his short-lived marriage to Liza Minnelli in 2002, and he became even more popular in the UK after his appearance on I’m A Celebrity Get Me Out Of Here! in 2006.

He also appeared on Celebrity Big Brother in 2016 but left the show on health grounds. He died later that same year after suffering a stroke and was found in his hotel room in the Canary Riverside Plaza Hotel in London.

With few folk in the sale room, three international bidding platforms took bids over two days on July 8-9 for the Ultimate David Gest Collection, which also included 26 pages of an unpublished book by Gest on Michael Jackson, his birth certificate, his high school graduation year book and an engraved Waterford crystal display-piece invitation to his wedding to Minnelli.

Most of the items had around 2000 people bidding against one another.

A silver-plated caviar serving dish belonging to Gest and Minnelli which would normally bring £40 fetched £220, and even a bundle of water-stained posters of Liza Minnelli brought in £200.

John Crane said: “My favourite lot was the signatures of the original Seekers which fetched £150. They did a final concert in Liverpool three or four years ago and it was the only group that had the original line-up from the ‘60s.”