Liverpool couple wed with their Labrador puppy as surprise guest of honour - The Guide Liverpool
Contact Us Advertise with The Guide Our Video Services Follow us:

After Covid restrictions meant they had to twice cancel their Italian wedding plans, Jess and Liam Glover opted to tie the knot closer to home.

But with a reduced party of just 12 watching them exchange vows, the Fazakerley couple didn’t want to miss off one very special guest – their Labrador puppy Nala.

They decided to not only include her in the ceremony at Thornton Hall, she actually walked down the aisle ahead of 31-year-old Jess, stealing the limelight from the bride!

“She’s such a big part of our lives that we wanted her to be a big part of our day too,” says Jess. “So when we had to change our plans we thought we might as well make the most of things and get her involved. 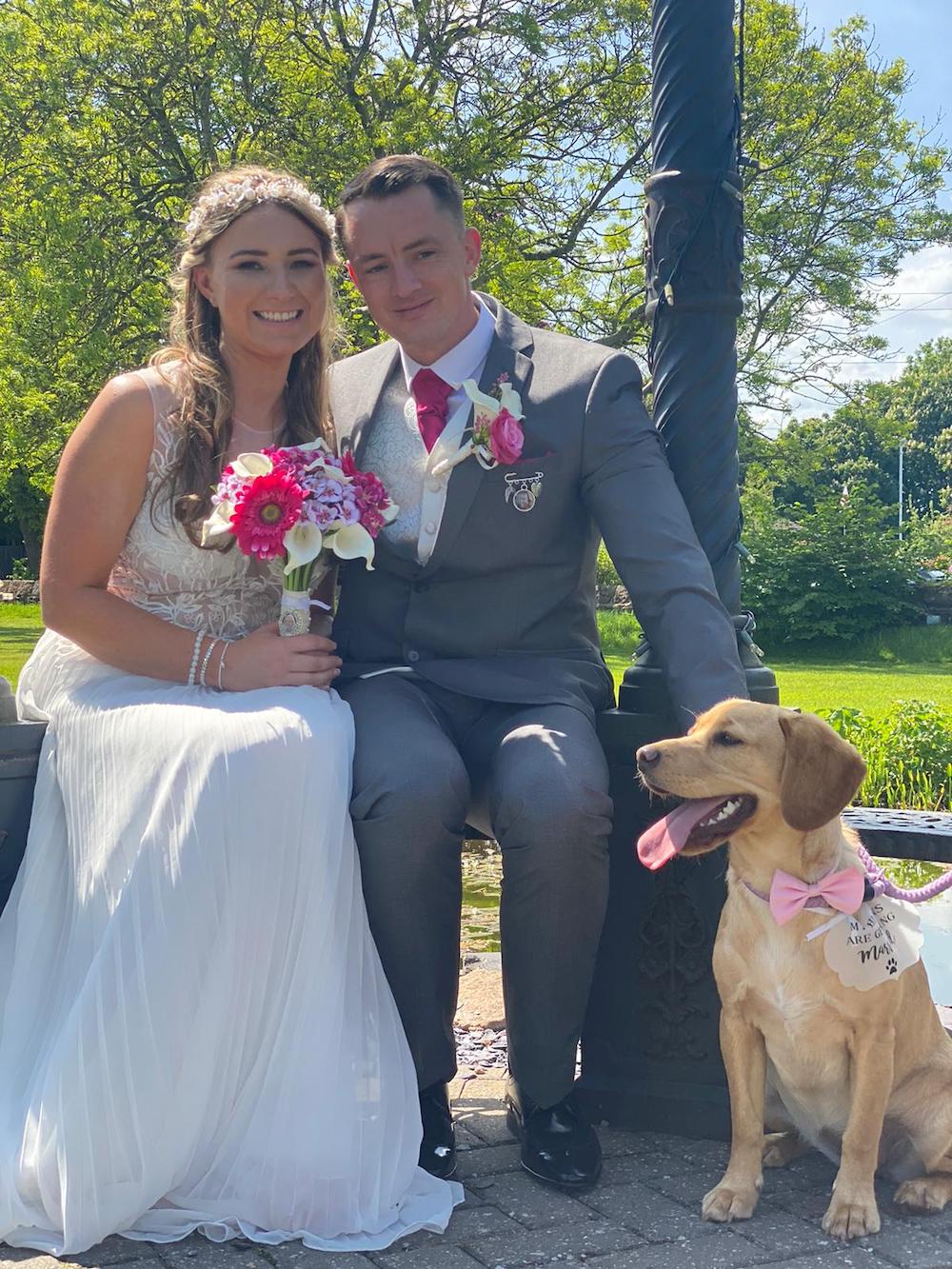 “Nobody else knew she was coming, we kept it as a surprise which was hard because she arrived in a big pet Porsche!  Her car was definitely flasher than mine, because we didn’t bother with wedding cars so I had a navy Vauxhall insignia whereas she was in a Porsche.

“But she loved all the fuss and she was really well behaved, she was good as gold for the whole time.”

Jess, who works in the travel industry, and Liam had intended to have a big wedding with 50 family and friends In Italy, first in September 2020 and then rearranged to May 2021.

Nala, who joined their family in November last year aged eight weeks, was due to go on a break of her own to No More Kennels luxury dog hotel in Cheshire while the couple were away.

“When the Government’s announcement came out in February we considered postponing our Italian plans again by a couple of weeks until after the May 17 date but everything was still so uncertain. We decided to do a small legal ceremony here and next year go to Italy for a renewal of vows,” says Jess. 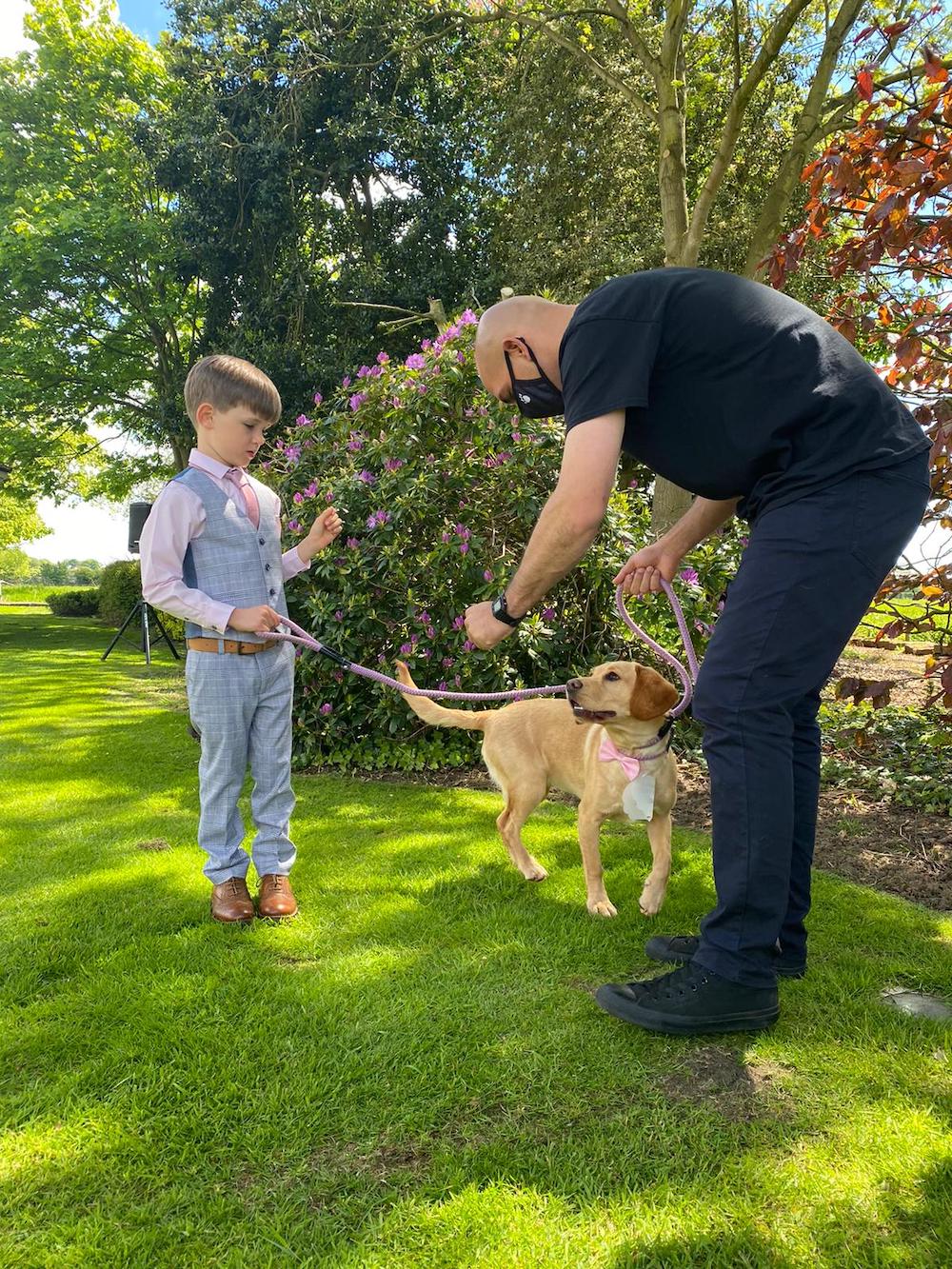 “We booked Thornton Hall and it was literally just our closest family going, 12 of us in total including our two nephews, I didn’t even have any bridesmaids. But by then we had Nala and she ruled the roost from day one, so we really didn’t want to leave her out.

“We’d already taken her to No More Kennels to get her socialised when we still thought we were going to Italy, so when we knew we weren’t we spoke to the owner Rebeckah and she said, ‘wouldn’t you like Nala to come to the wedding here?’ and we loved the idea.”

As this was their first doggy wedding, Rebeckah chaperoned Nala herself, making sure everything went smoothly.

“We had our nephews walk down the aisle first and then she came down and I could hear everyone going ‘oh my god, there’s Nala’” laughs Jess. “She totally upstaged me, but she was so good.  She ate her chew in about 10 minutes then just sat there and watched the ceremony.”

Nala stayed with the party for about two hours, enjoying snacks and a run around in the grounds before being whisked back off to the hotel for the night in her VIP car.

The next day, she was reunited with the newlyweds to head off on honeymoon to the Cotswolds with them.

We sent our #DogCam inside the luxury Dog Hotel @NoMoreKennels & here are 9 reasons why all K9 owners will love it >>https://t.co/h4sCAVFW9v pic.twitter.com/FsGt8UG9E4

Rebeckah Vaughan, owner of No More Kennels, says they created the wedding package in response to customer demand.

Dogs are collected in the pet Porsche the night before the wedding to stay in a luxurious bedroom complete with TV, air-con and central heating, real beds and treats from the Yappetizers menu. The next morning, they visit the in-house spa for a bath, trim and spritz of pawfume. They’re then dressed in a bow tie or outfit of their owners’ choice and taken in the Porsche to the wedding venue.

A handler stays with the dog all day, taking care of everything from poop picking to photo wrangling and guiding them down the aisle.

Jess says looking back, especially now the first photos have arrived, she and Liam couldn’t be happier that they decided to have Nala there with them.

“It wasn’t what we planned but we thought let’s go for something a bit different because we can. Some people can’t believe we had our dog at our wedding, but anyone who’s got a dog understands that having her there just made the day even more special.”

Find out more about No More Kennels here.