Liverpool has been invaded by skeletons, sprites and ‘glorms’…but why?!

Prinnies beware! You might be inclined to rub your smoky-eyes in disbelief this week, as Liverpool is set to be taken over by a mob of skeletons, air sprites and Liverpool glorms.

No, it’s not a dress rehearsal for doomsday (or just your average night out at Smokey Mo’s), it is in fact an artist-led initiative to spread awareness about Liverpool’s poor air quality. A problem that affects everyone in the more built up areas of our fine city, and one which organisers have labelled ‘an invisible public health emergency’.

VENT! Liverpool Air Quality Festival is about the actual smoke in your eye – microscopic man-made pollution. The toxic fumes emitted from the backsides of buses, cars and other gas-guzzlers on the roads that we stroll (or strut) down. Breathing in the dirt and grime like passive smokers, totally oblivious to the side-affects and health problems it causes.

Research has suggested air pollution takes the lives of 239 people a year in Liverpool, and shaves off a staggering 2440 life years from the local population. Those terrifying stats should be enough to mobilise the eco-warrior in all of us. If not…there is always Leonardo DiCaprio.

Climate change is a topic on everybody’s lips right now after Leo used his acceptance speech to talk about the environment. If it is action Leo wants, he is welcome in Liverpool any time to see the work being done at the grassroots to tackle the root causes of air pollution – and then we’ll take him down the Raz for a Fat Frog.

The VENT! organisers are at the forefront of this popular movement to transform life in the city, and have teamed up with a mix of artists, scientists and academics to promote this greener vision of the future. Showing people how to live in harmony with their urban surroundings and bring down emissions together.

This ‘invisible intruder’ has no place in the Liverpool, and the world of tomorrow – and that is why five local artists have been commissioned to talk about this problem in new, inspiring ways. The two week festival includes a variety of talks, installations and cultural interventions by Julieann O’Malley, Tristan Brady-Jacobs, Pamela Sullivan, Tomo and Charlotte Weatherstone.

The festival is already in full swing, so there are still plenty of chances to see the public artworks borne out of the project.

‘But what else can we do?’ we hear you cry! A panel of participating artists, scientist and academics are coming together to discuss just that. Get yourself down to the Baltic Triangle’s Coffee & Fandisha at 4.30pm on Saturday 5 March for the final Public Forum of the festival – surround yourself with like-minded people who don’t like to bury their head in the sand either.

So what have the artist been up to? 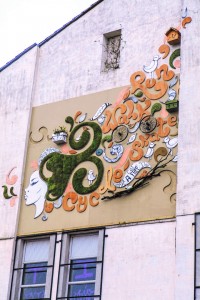 A spectacular living, breathing installation called ‘Iris’ which invites Mother Nature into the brickwork of the old docklands and revamped industrial buildings. Here you can imagine another, better world. With an abundance of shrubbery and vegetation, flower beds and troughs full of herbs for the wildlife to live.

This ‘air sprite’ artwork incorporates a special moss and lichens that are sensitive to increased levels of nitrogen. It will give the people of Liverpool a chance to understand the quality of the air they are breathing, without needing to interpret statistics. Power to the people! 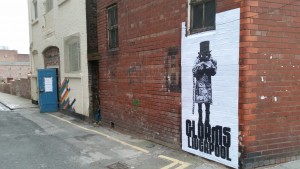 The Liverpool Glorms are haunted wraiths of men, driven mad by a monstrous desire to achieve immortality. Looking like something out of a Mad Max outtake, with atomic age gas masks fused to their heads. They wander out, filtering the outside world, petrified of the hidden nasties in the air. Is this what awaits us all? Look out for a range of these projections pasted onto the facades of buildings around the city centre, appearing in areas where pollution is most severe.

What makes this work even more interesting is that the Glorms are actual real Liverpool folk, as Tristan has spent the duration of the festival taking photographs of real people and transforming them into nightmarish visions of the future. Shout out to all the Glorms out there! 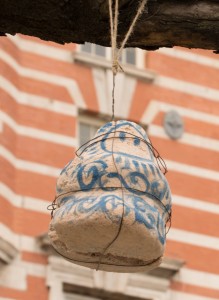 The title of Pamela’s work sums up what it is all about – it’s a warning about what exactly is waiting for us if we fail to clean up the airways for modern city dwellers. 50 skeletons will be hung around the city, covered in organic materials that will melt away in the rain and appear in various states of decomposition. This is the terrifying truth of the matter. A society that has been built on a fossil fuel addiction is slowly spiralling towards a cataclysmic cold turkey. 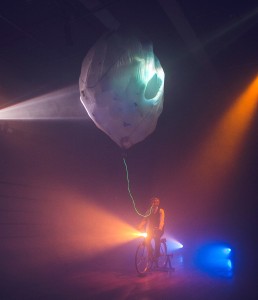 Last week, down at Bluecoat Julieann O’Malley put all your spinning class efforts to shame by testing the limits of her body by cycling through a cloud of ‘air pollution made visible’…for over 2 straight hours.

The mesmerising performance incorporated video work, soundscapes and photography to provoke questions and conversation about the real effects of microscopic man-made pollution.

WATCH a video of the piece here

Tomo’s ‘Clean Air Vehicle’ project involved a scheme to revamp Liverpool City Bikes but according to VENT! Organisers, Tomo was declined permission for an artwork to be placed on a small number of the bikes. Apparently there will be a pop-up response in the Baltic Triangle on Thu 3 March.  We’re looking forward to finding out what that could mean, but nonetheless bikes really are the cleanest form of transport – good for the body, good for the environment. So buy some winkelpickers and get on your bike.