Liverpool Legend Gerry Marsden Supports Run for the 96 on Sunday

Merseybeat legend Gerry Marsden MBE is the latest name to throw his support behind this weekend’s Run For The 96 5K.

The second annual community legacy fun run is on Sunday (22 May) at 9.30am in Stanley Park – a fitting location between Liverpool’s Anfield Stadium and Everton’s Goodison Park.

The overall aim of the Run For The 96 5K is to celebrate the lives of the 96 Liverpool fans who were unlawfully killed in the Hillsborough tragedy on 15 April 1989, while also remembering their families and the survivors who have tirelessly fought for justice with dignity for 27 years.

Mr Marsden will take to the stage alongside Hillsborough family members including Margaret Aspinall, Chairman of the Hillsborough Family Support Group, and special guests to cheer on the 2,000 participants as they walk, jog and run the 5K distance.

Gerry & The Pacemakers recorded You’ll Never Walk Alone in 1963. The group’s manager was Brian Epstein, who also managed The Beatles, and the single was produced by The Beatles’ producer, George Martin.

Taken from the Rodgers and Hammerstein musical Carousel, You’ll Never Walk Alone was a Number 1 hit for four weeks for Gerry & The Pacemakers – making it the most successful cover of the song of all time.

You’ll Never Walk Alone was adopted by fans of Liverpool Football Club as their anthem at the time of its release – and it still remains so to this day. 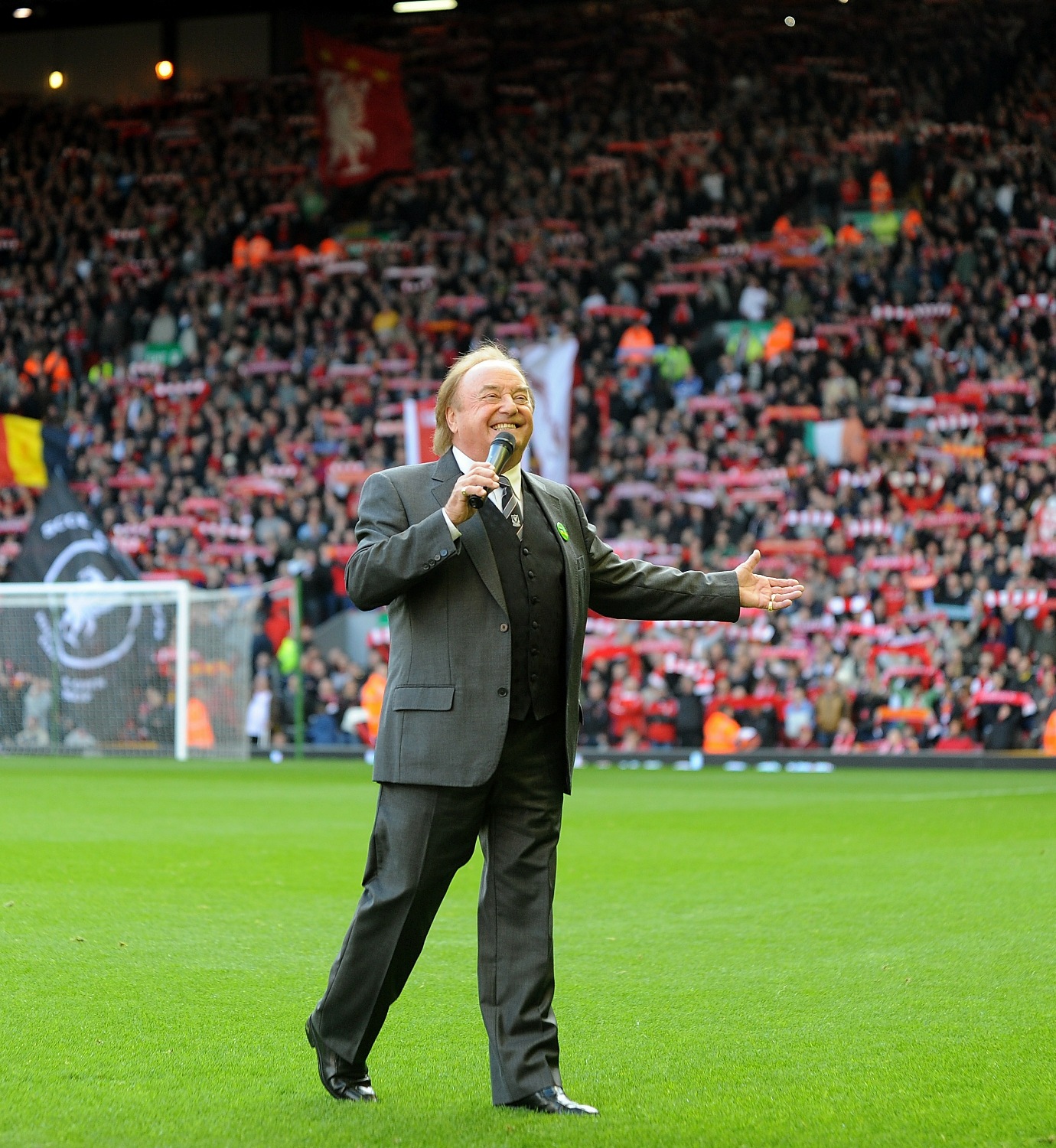 “I am delighted and proud to be supporting Run For The 96 5K in this very poignant year now the truth is out for the whole world to know after a 27-year fight for justice.

“It will be a real honour to stand alongside the runners, Hillsborough families and survivors on Sunday as we celebrate the lives of The 96.”

A team from Everton Football Club are also supporting Run For The 96 on social media by encouraging people to sign up to Run To Remember. Support comes from Everton Captain Phil Jagielka, James McCarthy, Graeme Sharp, Graham Stuart and Ian Snodin.

Before the run starts, both Liverpool and Everton club anthems – You’ll Never Walk Alone and Z Cars – will be played to highlight the solidarity of the red and blue sides of the city throughout the 27 years since the Hillsborough disaster.

There will be a big surprise at 9.25am. Everyone will then join together for a minute’s applause to remember The 96 before the runners set off.

Run For The 96 5K is the brainchild of Dom Williams who, together with 14 fellow runners and support crew, will be running 80 miles from Hillsborough to Anfield in the 24 hours immediately before the event.

Dom and the team will leave the Hillsborough memorial at Sheffield Wednesday on the morning of Saturday, 21 May, and will run through the night. They will arrive at the Isla Gladstone in Stanley Park the following morning in time to officially start the event and lead the runners in the 5K route round Stanley Park.

Dom has organised the mammoth Hillsborough to Anfield team running challenge for the past four years, but usually over a three-day period. He developed the idea of Run For The 96 5K with race organisers BTR Liverpool to create a new 5K community legacy fun run as a way of engaging the wider community to run to remember The 96.

The Hillsborough to Anfield running team includes Hillsborough family member and justice campaigner Steve Kelly, an Everton fan who lost his brother Michael in the tragedy.

“The lyrics of You’ll Never Walk Alone have brought the Hillsborough families and survivors so much comfort during the last 27 years. So to have Gerry Marsden join us on Sunday is going to make Run For The 96 even more memorable during this momentous and historic year. We know we’ve never walked alone in our fight for justice.

“Seeing the runners stand side by side in their commemorative red and blue T-shirts is very emotional – their togetherness, support and unrivalled solidarity. It’s a real sight to behold, and only in Liverpool. Come and join us and let’s make this a day to remember.”

As well as running to remember The 96, participants are invited to fundraise for the Liverpool FC Foundation and Everton in the Community, the charitable arms of the city’s two football clubs to enable them to continue their fantastic work across Merseyside. 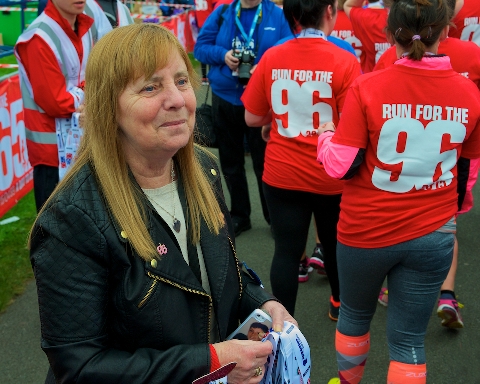 The charity element is a key part of the event’s commitment to ensuring that local communities benefit from the legacy run. All funds raised or donated by those taking part are split equally between the two charities.

Last year, £8,113.32 was raised for the Liverpool FC Foundation and Everton in the Community through the event – therefore each receiving £4,056.66.

People can fundraise or make donations by visiting the official Virgin Giving page at https://tinyurl.com/h2c3pmz

There are plenty of family activities running alongside the 5K run, including inflatable football and face painting. Everton in the Community will also host their Fanzone stage with entertainment running between 11am and 1pm.

Crabbies will be on-hand with relaxation area offering runners and spectators non-alcoholic samples. Other refreshments will also be available to purchase.

The entry fee for Run For The 96 5K pays to stage and deliver all aspects of the event. All participants receive a special commemorative red or blue technical T-shirt and medal.

Participants are invited to wear their red and blue T-shirts on the day and are encouraged to collect them prior to the event. 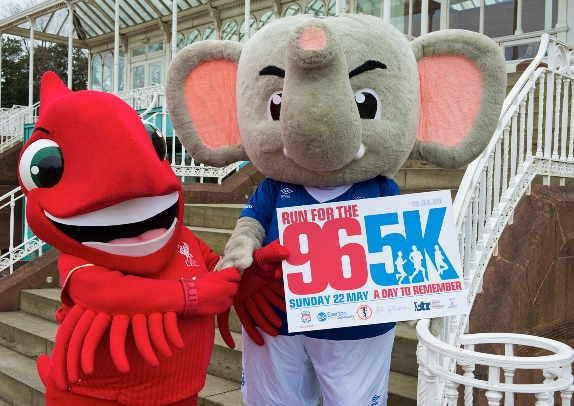 Online entries at www.btrliverpool.com are open until close of play on Friday (20 May).

Or you can enter in person at the BTR office at 82 Market Street, Hoylake, Wirral. BTR will be open on Saturday (21 May) between 10am and 2pm for final entries.

Run for the 96 Gerry Marsden