Liverpool Pride is back for 2017 and has announced its theme for next year - The Guide Liverpool
Contact Us Advertise with The Guide Our Video Services Follow us: 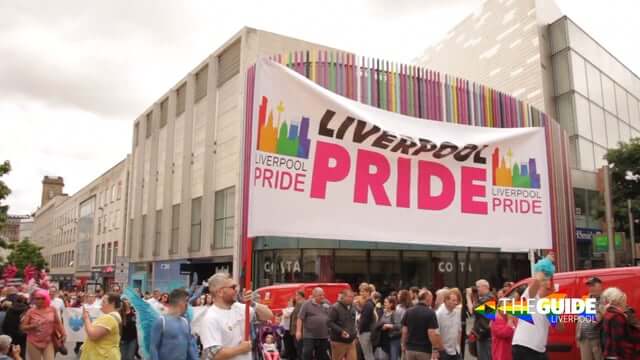 Yes we know it is the week before Christmas but this is a date for your summer diary that you need to add NOW! Last years Liverpool Pride was such a success that the countdown has already begun for the next one.

Organisers of the increasingly popular Liverpool Pride Festival have announced that the free event will return for its eighth consecutive year during Summer 2017.

Liverpool Pride has grown to become one of the city’s major annual events, attracting more than 32,000 festivalgoers in 2016 to celebrate lesbian, gay, bisexual and transgender communities.

The theme for 2017 has also now been revealed as International Love, with Liverpool Pride organisers looking to work with spread the Liverpool message far and wide amongst partners in Merseyside’s twin towns and cities.

Joan Burnett, Trustee of Liverpool Pride Charity said: “We are delighted to announce the date and theme for the Liverpool Pride Festival 2017 as an early Christmas present to the LGBT community. The festival returns for its eighth year, and we have again invited the public to get involved by helping to choose the theme. We’ve had an overwhelming response and our theme for 2017 is International Love, which really did stand out amongst our festivalgoers.

“Fifty years after the decriminalisation of male homosexuality in the UK, conditions are very different from country to country. Through our theme, our intention is to celebrate LGBT lives around the world and highlight the places where is it still illegal and extremely dangerous to be LGBT.  We’ll have a focus on great entertainment with an international flavour, working with diverse cultural communities here in Liverpool.”

The Liverpool Pride Festival began as a community response to the death of murdered gay teenager Michael Causer, who tragically lost his life on 2 August 2008.

The festival was specifically created in 2010 in Michael’s memory as a way to celebrate his life and to empower the LGBT communities, and each year the festival coincides with the anniversary of Michael’s death. The festival continues to remind the community to stand up for LGBT culture and equality through a city-wide celebration where everyone is welcome.

Each year, the Liverpool Pride March is an increasingly popular and poignant part of the special weekend – and again the march will play a major role in the weekend’s programme. Full details will be announced in the coming months.

Liverpool Pride’s International Love theme will also complement a city-wide season of events and performances to mark the 50th anniversary of the Summer of Love. The 50 Summers of Love season will run from May to August 2017.

Joan Burnett added: “We’re so proud of Merseyside people for choosing such an outward looking, positive theme at a time when international issues loom large in all our minds. It’s also the perfect fit to complement Liverpool City Council’s 50 Summers of Love initiative, marking the anniversary of the most famous era of the 1960s with a city-wide programme. We’re looking forward to announcing more details in the coming months about the exciting programme we are planning.”

Radio City is the official Media Partner for the Liverpool Pride Festival 2017.

Keep up to date with Liverpool Pride’s new announcements at: