Liverpool will continue to pay tribute to George Floyd with this virtual vigil on Saturday - The Guide Liverpool
Contact Us Advertise with The Guide Our Video Services Follow us:

A virtual vigil being held tomorrow as Liverpool continues to pay tribute to George Floyd should be a catalyst to create change that has to happen.

Sonia Bassey, MBE, who with Jacqui Spencer, has led the city in support of, and in protest at, the killing of the African-American says: “His death cannot be in vain.

“His death has got to be the catalyst for change, it has to say to people ‘this must stop’.

“And it is down to us, as individuals, to pick up the baton left by the likes of Martin Luther King and Malcom X, to make it happen.”

And Sonia adds: “The virtual vigil will add to the momentum for change, and I hope it will have more reach globally alongside all the other protests that are happening.”

The virtual vigil to be held at 4pm on Saturday, June 6, follows on from the city wide tribute on Tuesday when the city’ landmarks were illuminated purple, and from a tribute by Liverpool FC players earlier in the week, as they went down on one knee around the Anfield circle to honour the Minneapolis security guard and the Black Lives Matter movement.

There are lots of ways you can support #GeorgeFloyd and #BlackLivesMatter this weekend in Liverpool.

MORE - It’s Liverpool vs Manchester as our two Metro Mayors go head to head…on the decks!

George Floyd died in Minneapolis died on May 25, following his arrest by police officer Derek Chauvin who has since been charged with his murder.

His death has sparked protests across America, including in the capital Washington where riots have broken out close to the White House, and worldwide in support of the ‘Black Lives Matter’ movement.

A video showed him saying he was in pain and couldn’t breathe, while being held down before he died.

Sonia and Jacqui led the community response, heartbroken because, as they said, it could have been one of their fathers, brothers, sons, uncles, nephews.

Jacqui added: “The way the city and the communities of Liverpool have got behind this just demonstrates to us the level of feeling around injustice, not only for George Floyd, but for all our Black males lost to racism.” 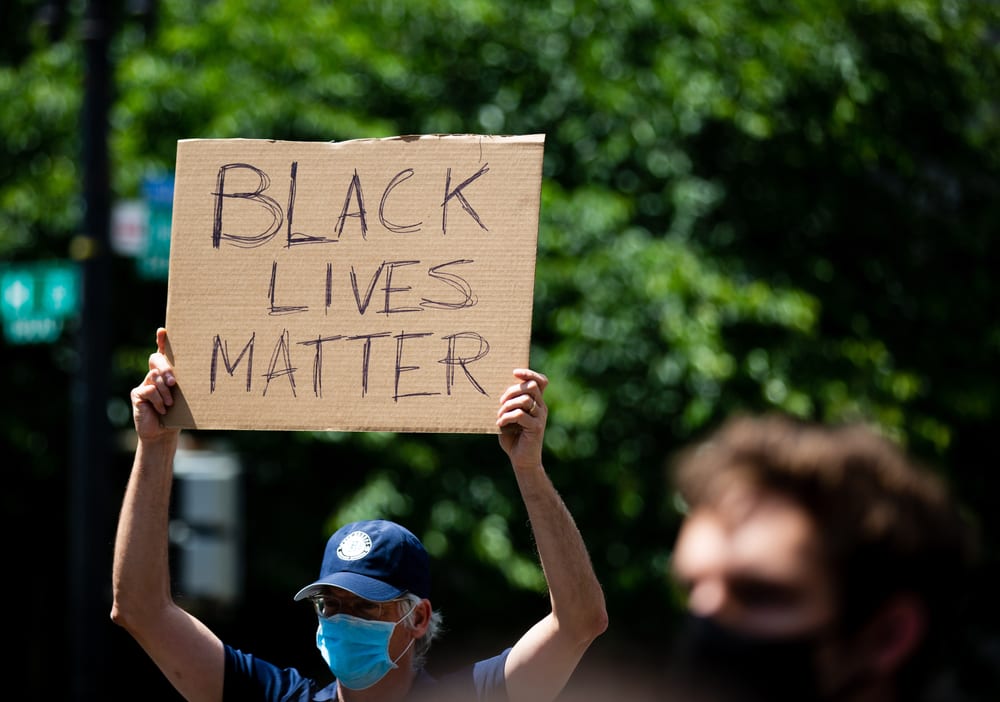 Sonia says the idea for the vigil – and to light up the city – grew out of disbelief, and at seeing the killing as it unfolded on social media: “To see someone die in front of your eyes, it doesn’t seem real,” she explains.

And she says she believes the support for George Floyd and his family, and the call for change, has captivated people’s hearts.

“I think it resonates with so many people because it is so visible that it’s so wrong. It’s highlighted the horror of what happens.

“People have seen the pain it has caused, not just to George Floyd and his family, but to all black people around the world.

“It has highlighted and shown that in the middle of another crisis where people are in fear of their lives because of a virus they cannot see, it is doubly hard for black people – not just because of a virus but because they are being murdered for minor offences or, simply, for being alive, and their white counterparts are not.

“People can see the difference in treatment.”

Sonia adds: “The Rev Al Sharpton said yesterday that George Floyd’s death had changed the world, and you can only hope it has. There can’t be any more black deaths.

“For something significant to come out of his death would be wonderful because it would mean, at least, George Floyd didn’t die in vain.”

During and after the virtual vigil people are being asked to post photographs of themselves on social media, taking the knee, using the hashtag #JusticeforGeorgeFloyd or #itcouldbeoneofmine

Sonia ends: “Let us hope this is seen around the world. We have been moved that Liverpool has been so visible in this, and that visibility needs to be built on.

“And as the anger and all the emotions subside, we need to channel our energies into doing something to stop this happening. We won’t go away until something is done.”