Liverpool’s finest fuzz pop four piece Clean Cut Kid today announce a headline tour of the UK in spring. The seven date tour includes a show at London’s Scala on May 10th  and culminates in their biggest headline show to date in their hometown at the 1200 capacity Liverpool Academy.

Clean Cut Kid’s first four singles ‘Vitamin C’, ‘Runaway’, ‘We Used To Be In Love’ and ‘Make Believe’ introduced a band brimming with unshakeable hooks and full of imagination. Their songs demand your attention from the first second to the last and have gained them plaudits across the board, ranging from NME, Clash and DIY (“Clean Cut Kid are the thing missing in your life”) to Sunday Times Culture(“Earworms that channel Fleetwood Mac, Prefab Sprout and the White Stripes”) and Line Of Best Fit (“Melodies that will lodge cleverly and instantly between your ears”) as well as strong support from Annie Mac, Huw Stephens and Clara Amfo at Radio 1.

Clean Cut Kid – consisting of Mike Halls, Evelyn Halls, Saul Godman and Ross Higginson – packed in a stonking 32 festival appearances last year as well as 2 nationwide headline tours and a main support for The Courteeners on their November UK arena tour. The band are currently finishing work on their debut album – watch this space for more details… 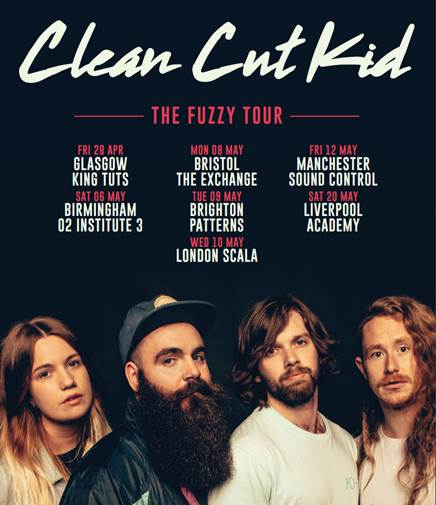