Look at how cute the new baby lemurs are at Chester Zoo - The Guide Liverpool
Contact Us Advertise with The Guide Our Video Services Follow us: 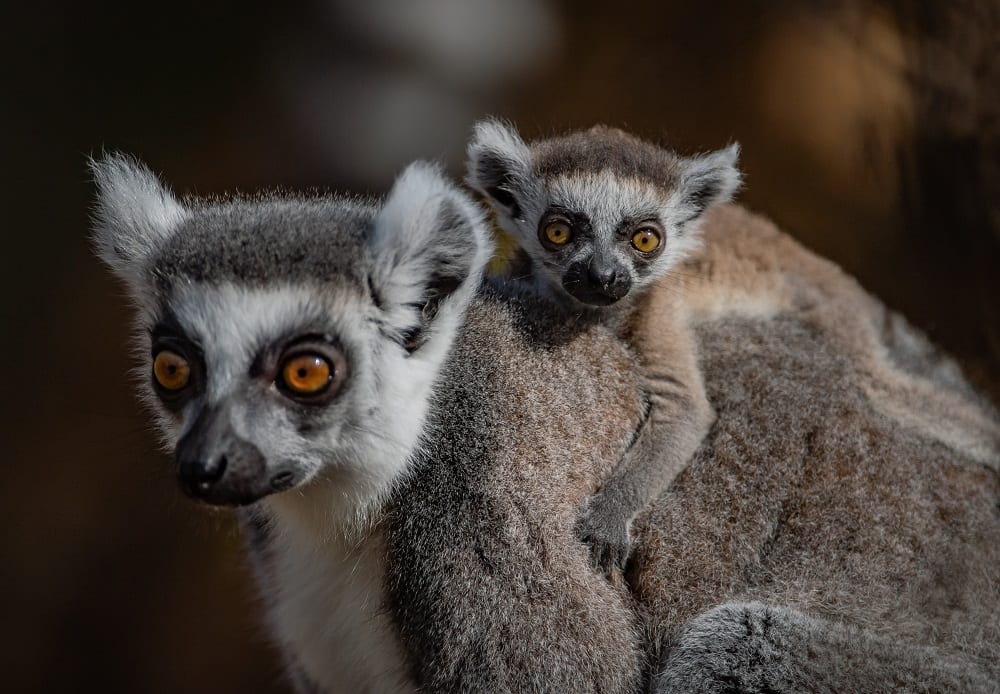 Five endangered ring-tailed lemur babies – including two sets of twins – and the zoo’s first ever baby black lemur, a species which is vulnerable to extinction in the wild in Madagascar, are the latest arrivals being celebrated by conservationists at the zoo.

The babies were all less than 15 centimetres tall at birth and each no heavier than a tennis ball.

Primate experts say they enter the world as ‘miniature adults’ with all of their fur markings developed. However, it will be some time before zookeepers are able to determine whether the new arrivals are boys or girls, as the babies travel around piggybacking on their mothers.

The lemurs of Madagascar are the planet’s highest primate conservation priority, as habitat loss in the wild pushes multiple species to the brink of extinction.

The important births follow the creation of a major new 6,000 square metre Madagascar zone at the zoo, recreating the dry forest habitat experienced by lemurs in the wild.

MORE: 11 things that will make you day out win Chester a great one

More than 1,100 shrubs, 50 trees and 360 different grasses – predominantly dry forest plants with small leaves, silvery foliage and spines – have been specially grown and planted by the zoo’s botany and horticulture experts.

The environment has been created to provide world-class habitats for the animals living there, while also creating a true-to-life experience for nature lovers.

The ring-tailed lemurs live side-by-side with a group of critically endangered red ruffed lemurs in the zoo’s first ever walk-through primate habitat.

Also being cared for in the huge new habitats are four crowned lemurs, another species that is endangered in the wild.

These adorable new arrivals have been spotted piggybacking on their mums! pic.twitter.com/bkyGQmvvol

“Madagascar is a truly inspirational place; home to incredible, unique wildlife that cannot be found anywhere else on the planet. Yet we can report first-hand that we are on the brink of losing many of these species forever. Conserving Madagascar’s lemurs is urgent and critical. That’s why any birth is important, but to have six rare baby lemurs born within weeks of each other is great news for the breeding programme.

“The newborns are clinging tight to their mums right now; it’s a real family affair. They grow up quickly though. Within a few weeks, the little ones will start to climb on their own, eat solid foods and gain some independence. It’s going to be a magical spring and summer period watching their development.”

Chester Zoo’s conservationists have been fighting to protect habitats and species in Madagascar for nearly ten years.

Madagascar has already lost up to 90% of its forests – which means that many species living in these environments are now on the brink of extinction.

The zoo team has been working with field partners Madagasikara Voakajy in the country’s Mangabe New Protected Area, in a bid to save this paradise and the unique range of animals that live in it.

Chester Zoo’s field programmes experts in Madagascar have also worked in partnership with adventure clothing specialists Craghoppers, who have joined the zoo’s mission to prevent extinction and helped with crucial monitoring of lemur populations.

The large-scale new Chester Zoo development is part of a campaign by the conservation and education charity to raise awareness of the threats faced by wildlife.

For more information on Chester Zoo head to the website here.