Meet Maisy who's raised £10,000 for Alder Hey - The Guide Liverpool
Contact Us Advertise with The Guide Our Video Services Follow us:

But that hasn’t stopped the nine-year-old from making a name for herself in the world of modelling – or raising a staggering £10,000 for the hospital which has helped her.

“Maisy doesn’t have the sight we prayed for as a baby,” says mum, Leanne, 32. “But that hasn’t stopped her from becoming the confident and happy child she is.

“She never gives up, ever, and she is an inspiration to us and everyone around her.

Maisy, from Ellesmere Port, has travelled across the world, modelling for top high street names like River Island and Next, as well as luxury Italian fashion brand Brunello Cucinelli. 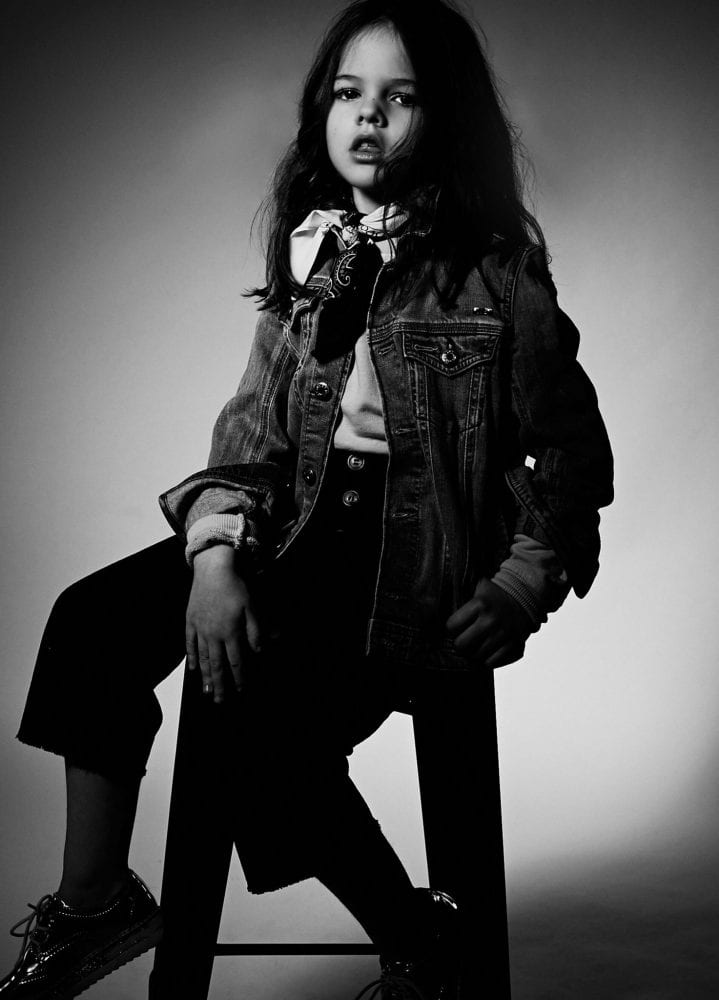 And when she’s not taking part in major fashion campaigns, she still doesn’t stand still, getting in step with ballet, tap and modern classes at her local dance school or jumping into the saddle for the horse-riding lessons she loves.

For while the world might look a lot different to Maisy and she faces difficulties on a daily basis, it doesn’t stop her following her dreams or packing as much – if not more – into her life as other children her age.

Although Leanne’s pregnancy was straight-forward with no complications, it soon became clear that Maisy had a number of conditions from birth: “Maisy was born with Erb’s Palsy which affected her right arm. It leaves it numb, like when you fall asleep on it, and she had to have physio for the first 12-18 months,” explains Leanne, who works in a pupil referral unit.

“We knew from day one that there was also something wrong with her eyes but then that wasn’t our main focus. But when we were referred to the eye clinic at Arrowe Park where she was born, and then Alder Hey, we realised it was more serious than we’d first thought.” 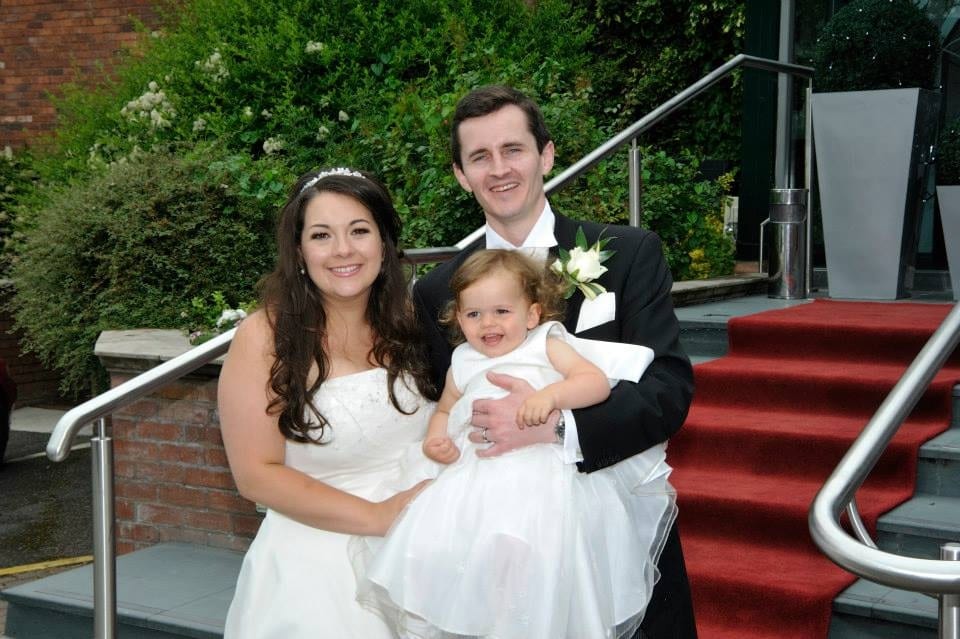 Maisy with mum and dad Leanne and Dave

In fact, Maisy was born with a rare condition called PHPV (persistent hyperplastic primary vitreous) where primary vitreous – gel –  used in the formation of the eye during feotal development remains in the eye at birth and is hazy and scarred causing vision disturbance, and she also has congenital cataracts.

She has had around 11 surgeries so far and is on medication for secondary glaucoma, which causes increased pressure within the eyeball and gradual loss of sight.

“It’s surreal at first,” says Leanne. “It was our first experience of being parents – although Maisy now has a sister, Eden, who’s five – and we’d not gone through anything like this before.

“Early operations included the removal of her natural lens and surgeries to try to correct her vision and the insertion of artificial lenses although they had to take those out. They have corrected the vision in her right eye – it’s not perfect but it’s not as bad as it could be, and we can only hope that intervention will stop any further deterioration in her eyesight. 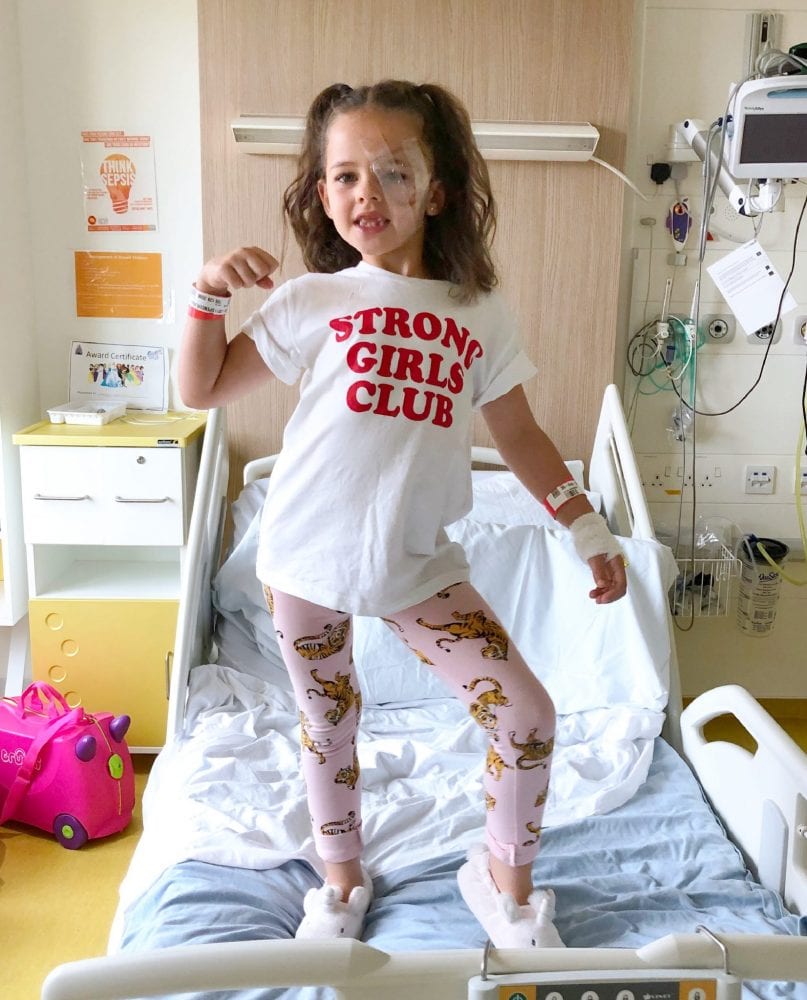 “It was hard when she was a toddler. We had to put patches on her eyes which she would tear off, breaking the skin, and she had contact lenses at eight weeks old.  I’d spend hours lying on the bed in tears because I couldn’t get them out.

“It was hard, which is partly why I help other parents in the same situation now because I didn’t have anyone. So we are very positive now, but it not always been like that.”

Perhaps because of time spent in hospital and not mixing in the usual toddler groups where she’d meet and socialise with her peers, Maisy was quite a quiet child – and in many ways still is.

But encouraged to dance, Maisy found something she loved, along with a teacher who saw something more than just grace and natural rhythm.

“Maisy’s dance teacher said she had a cheeky personality and was confident, and suggested we enrol her with a model agency,” says Leanne. “We did and she was accepted straight away. 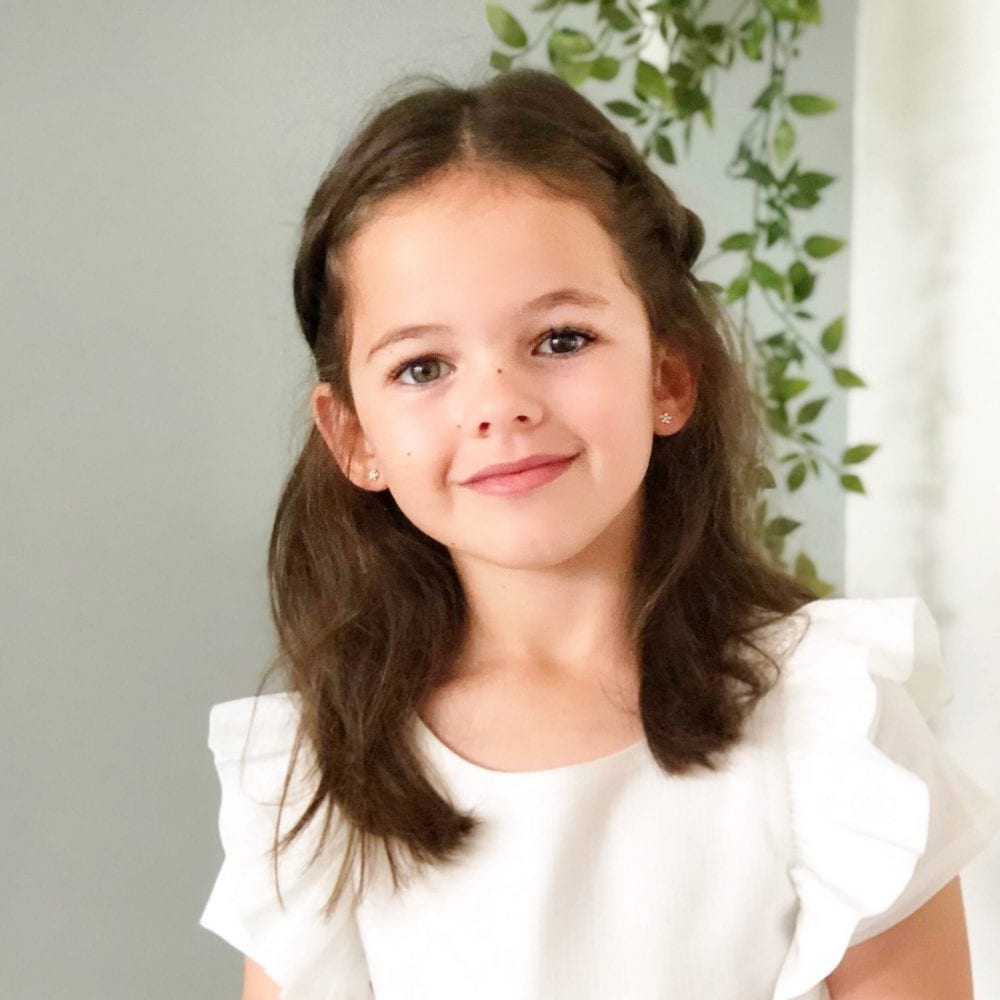 “Maisy is a quiet, shy girl but she took instantly to modelling. She comes alive in front of the camera.

“She’s modelled for Aldi and Character Toys like Peppa Pig, and one of best campaigns she was involved in was River Island’s ‘Labels Are For Clothes’ project which was about not judging people and used models of varying race, body shapes and abilities – which was perfect given Maisy’s condition.

“I’m not a pushy parent and if Maisy – and Eden as she models now too – didn’t want to model then she wouldn’t do it. But Maisy loves it. She does a handful of jobs each year, although Covid has brought that to a stop, and it provides her with all sorts of opportunities and money for when she’s older. Everything goes into her bank account and, while she can spend 10% now on whatever she wants, the rest may help her when she’s grown up. 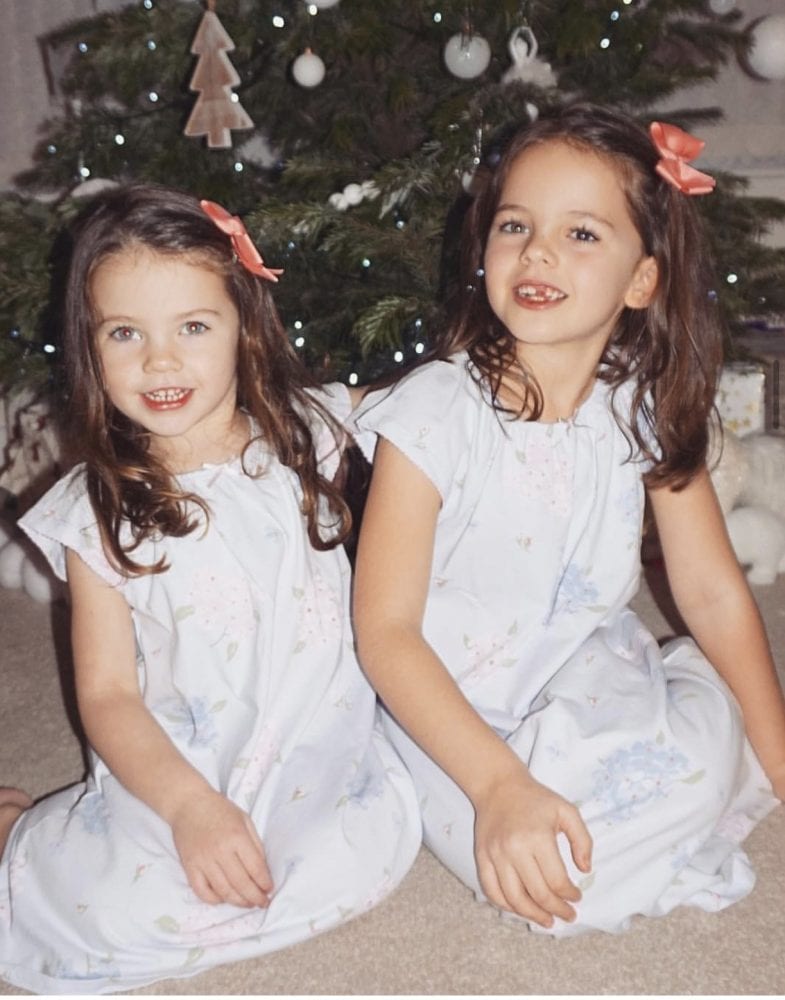 “We don’t know if she’ll be able to drive, for instance, so it might come in useful then, or she might want to go travelling, who knows?”

You’d think she’d have very little time to do anything else, but for the last two years Maisy has also helped dad Dave, who started fund-raising for Alder Hey as a thank you for what they had done – and continue to do – for his daughter and children like her.

“Dave did a sky-dive and then a zip wire, it became a real family thing,” says Leanne. “Then Maisy said ‘I should do something. I should raise money’.

“She walked a 5K with her friends, we did a bingo night and then, the biggest thing, we all cycled from our house to Alder Hey. I don’t think we realised how far it was when we came up with the idea! And I don’t think we would have completed all 26 miles if it wasn’t for the fact that it was to raise money for the eye clinic, which has done so much for Maisy, and the hospital itself. 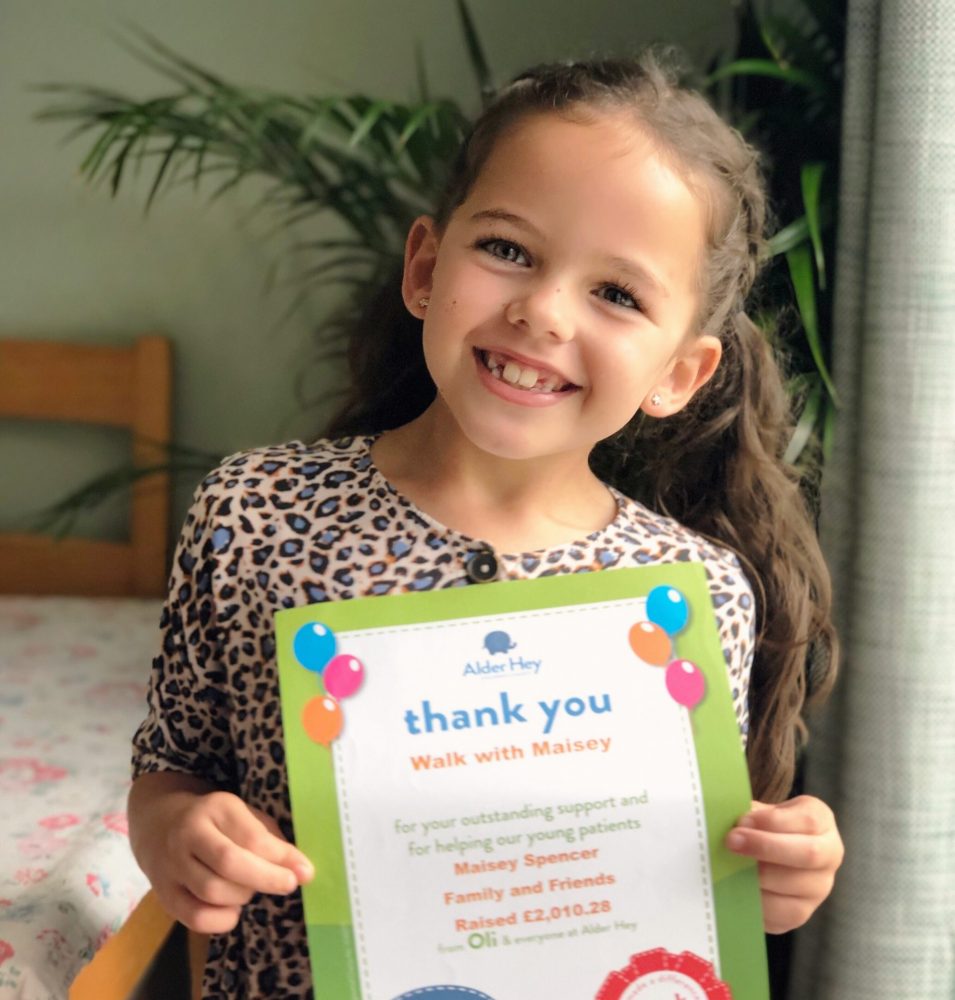 “But we are so grateful to them and to raise £10,000 is such an achievement for us and, in particular, for Maisy.”

It’s not known what the future will look like for Maisy.

Rising pressures in her left eye leave cause for concern and the question about possible further surgeries but, rather than worry, Leanne and Dave focus on having a happy family life and enjoying all the positives of right now.

“She says she’d rather work in pre-school with children, but who knows,” smiles Leanne.

“I’ll be proud of her whatever she does. At the moment I’m proud of the fact that she’s getting on with her life and not letting anything stop her, and that she is giving hope to others like her. To me she’s beautiful on the outside and the inside, and that’s what matters.”

MORE - 11 things you might not know about Jodie Comer