Meet the man behind Anfield's matchday mosaics, and why those for Hillsborough mean the most  - The Guide Liverpool
Contact Us Advertise with The Guide Our Video Services Follow us:

Meet the man behind Anfield’s matchday mosaics, and why those for Hillsborough mean the most

From the French flag of former manager Gerard Houllier to the recent flames and number 97 as Hillsborough claimed another victim, Andrew Devine, the mosaic images held high by fans before matches at Anfield are as memorable as they are moving.

For the creative genius behind them, Andrew Knott, they are a labour of love and one the LFC supporter has been delighted to have been doing for 25 years this year.

“I didn’t think I’d be doing them this long,” admits Andrew. “But it’s an honour to do them, especially when, like the one for Andrew Devine when we played Burnley last week, they mark a significant event or person, and have an important meaning.” 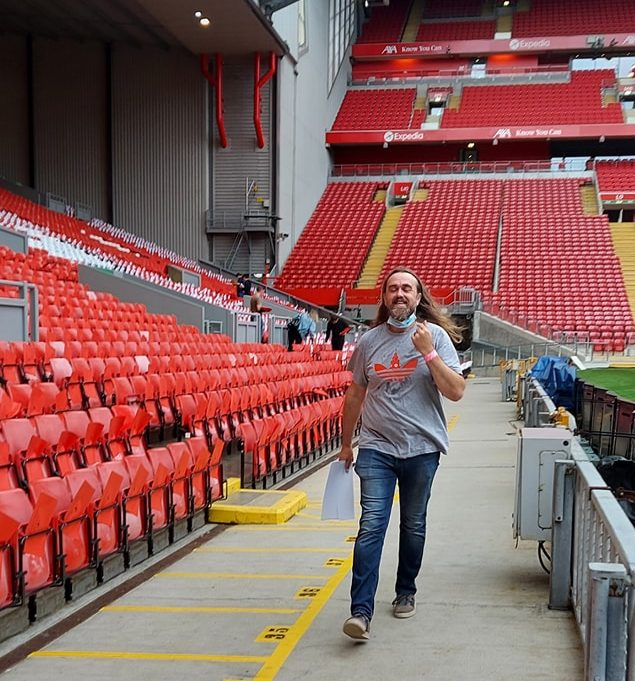 Graphic artist Andrew, 52, has been designing the mosaics since 1996. They came about after a meeting with then CEO Rick Parry about how to get a good atmosphere back into the Kop after the stadium became an all-seater.

“Genoa had done a mosaic when we played them, and I thought I could do that,” explains Andrew. “I was a designer and had my own printing business at the time and I offered to do it – we just had to overcome the logistics of attaching sheets of card to the seats and praying the fans would lift them up!”

To create the mosaics, Andrew designs an image and then maps it out on a grid, working out which sheet needs to be which colour in order to display the overall picture.

He started with sheets of A4 paper which have now evolved into A3 cards which get attached to the seats before the games. On the back is a tagline asking fans to hold the card aloft ‘usually after we’ve sung You’ll Never Walk Alone’, alongside any message about the theme or the purpose of that game’s mosaic. 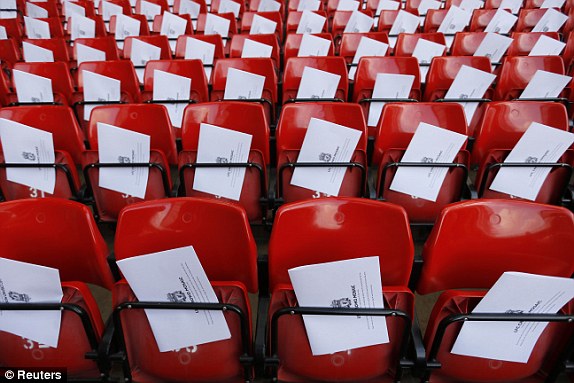 Envelopes under seats create the mosaics

While it took longer at first, it now takes an average of three hours to map out the images – Andrew has certain ones like the flames saved on his computer – and 12,500 cards to make them up. There can be more: “We did one when we played Dortmund on the way to Kiev which took about 21,000 with the 96 in yellow and black in their end as well red at ours, and I did the Millennium Stadium for the 2001 Cup Final against Arsenal and that was 26,000.” 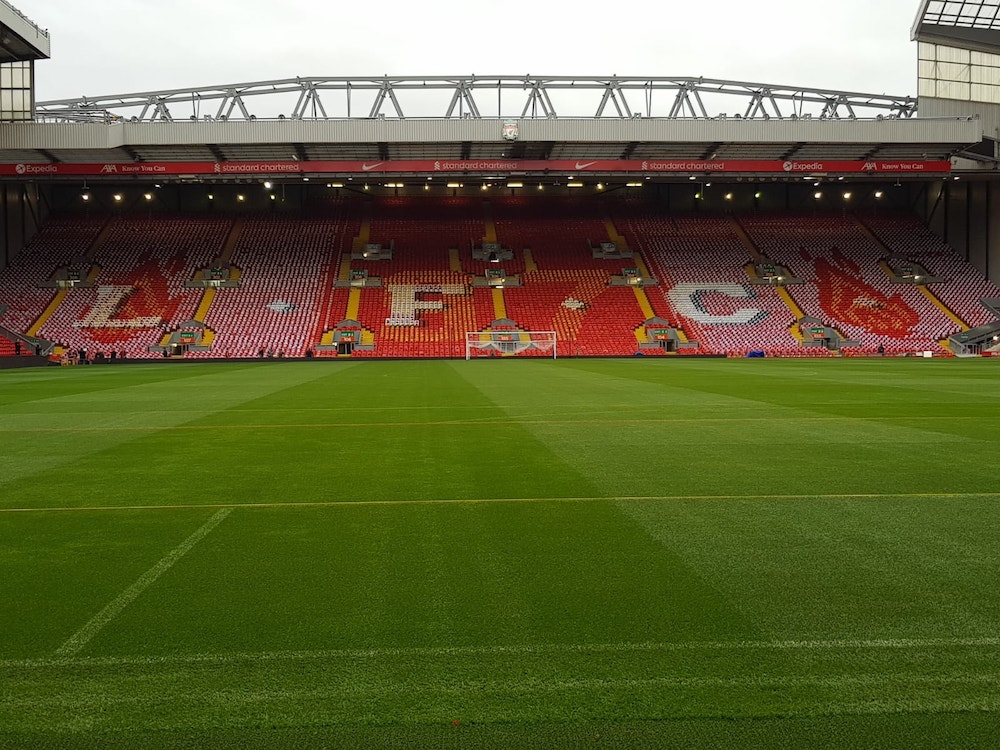 The first image was a simple LFC: “And I was so nervous,” admits Andrew, originally from St Helens but now living in Denbigh, North Wales. “But I still am, wondering if they will look how I think they’re going to.”

Since then they have become even more elaborate and extended around the ground – and out of it! 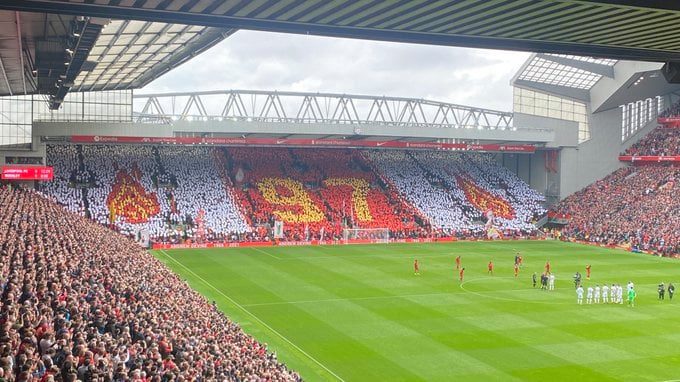 There was the famous ‘Justice’ mosaic which displayed the word itself along the Kenny Dalglish Stand, 96 on the Anfield Road Stand and the flames in the Kop.

And there have been numerous tributes to players like Gerrard and Jamie Carragher, as well as managers like Shankly.

“Initially we would come up with ideas,” says Andrew, who has long ties with the Red All Over The Land fanzine, “but it’s got to the point now where the club will ask too. It tends to be for significant events, or to mark occasions or pay tribute to the legends. 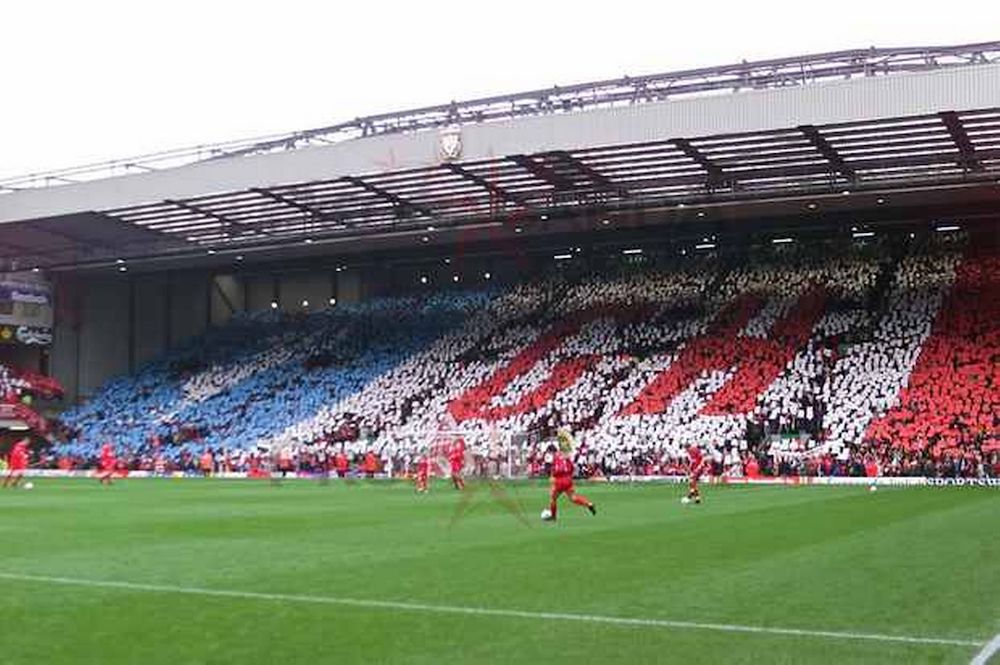 “The mosaics came to the fore when Houllier was ill in hospital and we did a GH, but another special one was ‘Allez Allez’ when he returned against Roma.

“One of my personal favourites was a tribute to Ray Kennedy who suffered from Parkinson’s Disease because he was my favourite player, perhaps because Paisley switched him from a striker to a midfielder, but there was just something about him.

“We were playing Arsenal, and we did a red number ‘5’ in the Kop end, and a yellow and blue number ‘10’ in the Arsenal end because that’s who he’d played with before us. 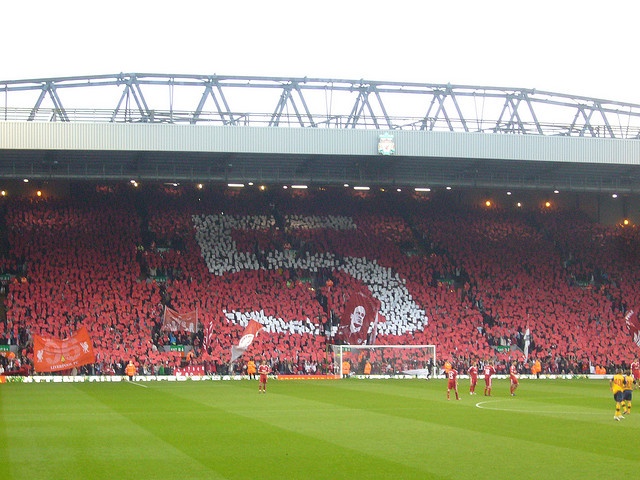 “But all the Hillsborough ones are special too, and they always get a good response. I was at Hillsborough and I was lucky to come home, relatively unscathed apart from mentally. For me, when I do those, it’s a way of giving a bit of support to the families and the victims, of those who survived and of those who didn’t.”

And Andrew, a talented artist who now works as a supervisor at Holywell High School, adds: “When I get thanks from people who have been going to the game longer than I have, when they put a message on Facebook, I get a huge sense of pride.  And it’s appreciated.” 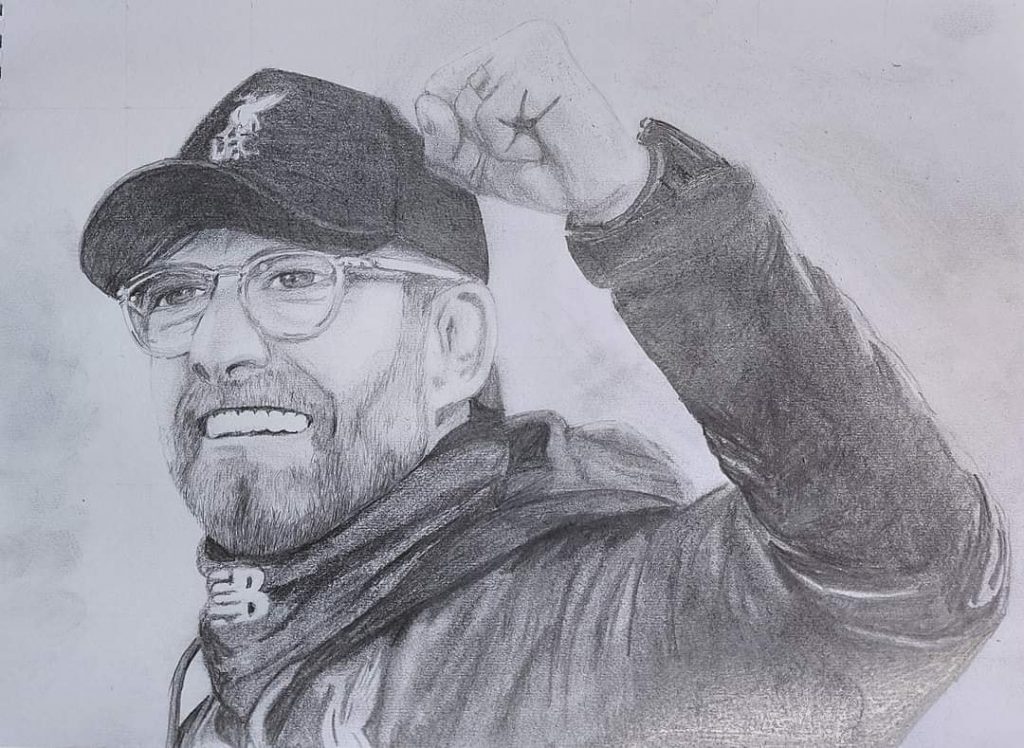 Andrew’s got plenty more ideas for future mosaics, and he is hoping he will eventually get to do the one he’d planned to celebrate winning the Premier League, before Covid had other ideas. But he’s not sure he’ll still be doing them in another 25 years.

“I’d like to be,” he smiles. “But by then it’ll probably be a hologram and instead of thousands of printed cards being held up, all someone will have to do is flick a switch.”