Merseyside’s Violence Reduction Partnership has teamed up with Merseyside Fire & Rescue, taking its powerful messages about keeping our ‘EYES OPEN’ to drug gangs grooming our kids on two of their fire engines in Kensington and Old Swan.

The messages, which are drawn from the VRP’s EYES OPEN campaign, which highlight the truth behind the lifestyles of kids who get groomed by drug gangs and asks the public to report suspicious activity, will stay on the fire engines for two years.

As fire engines are out in communities every day, the messages, which include helpline numbers and the campaign website www.eyes-open.co.uk, will be highly visible helping to make people more aware of the signs that suggest drug gangs are grooming kids and how to help.

“I didn’t know where I was. I had to search for it on Google maps to see how far I was from home.”

“There were needles all over. You couldn’t see the floor. I had to sleep there.”

“During the Coronavirus lockdown, we have not seen evidence that drug gangs have stopped grooming kids on Merseyside. So, we are very pleased that the Fire Service has supported our EYES OPEN campaign and the need to reduce the risk to young people who are groomed by putting its powerful messaging on their fire engines. This includes helpline numbers for anyone affected by this sort of child abuse by drug gangs, and also places where the activity can be reported to help these young people, such as the NSPCC, Childline and Crimestoppers. 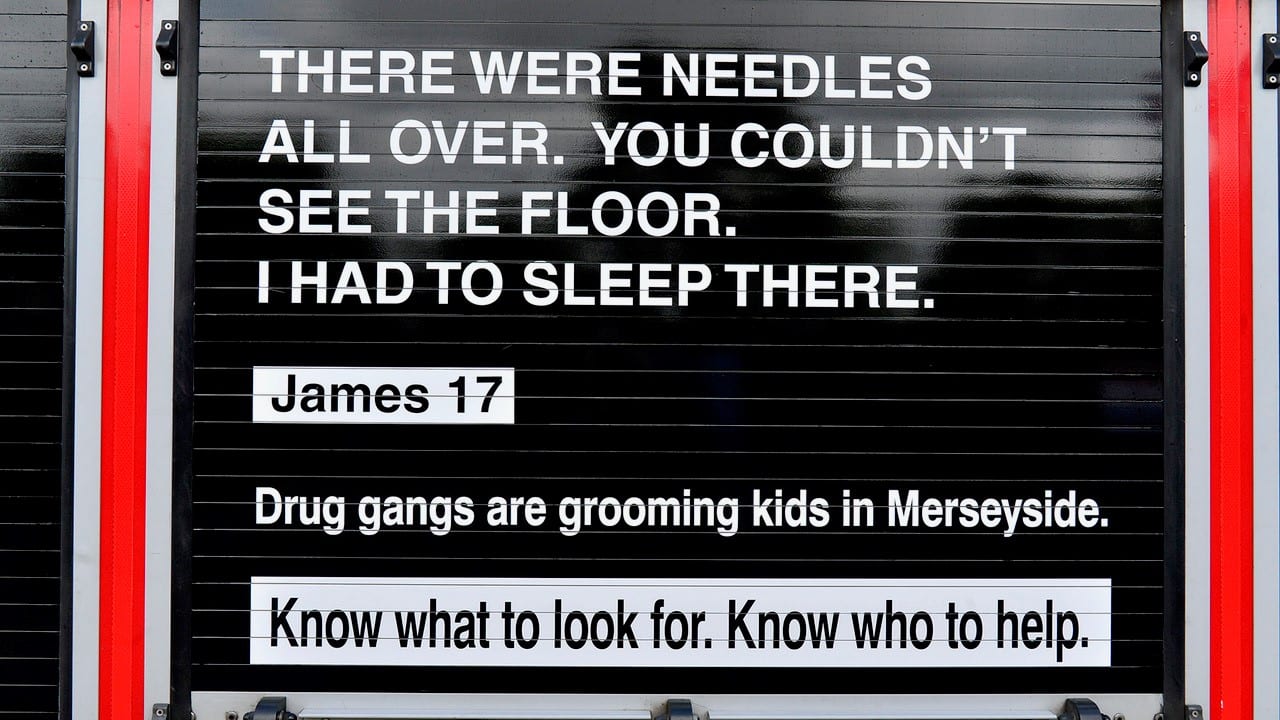 “It’s time we saw drug gangs for the abusers they are. Drug gangs are grooming kids in Merseyside every day. Grown men, and sometimes women, are grooming vulnerable kids who come from all sorts of backgrounds. They are coercing them to sell drugs, to be on the end of a phone line 24 hours a day to deliver drug orders, to store firearms and weapons, and to invade vulnerable people’s homes often hundreds of miles away from their homes to help the gangs make money. This has to stop.”

After London, Merseyside’s drug gangs are the second biggest abusers of kids, grooming kids as young as 10. The gangs groom kids by making them increasingly vulnerable, often buying the targeted kids gifts of clothes, food and bikes making the kids feel in debt to them but also making them feel part of the gang, or ‘family’.

Once groomed, the kids are sent away to other parts of the UK to sell their drugs, often hundreds of miles away from home. They can go missing from homes and schools for weeks at a time. 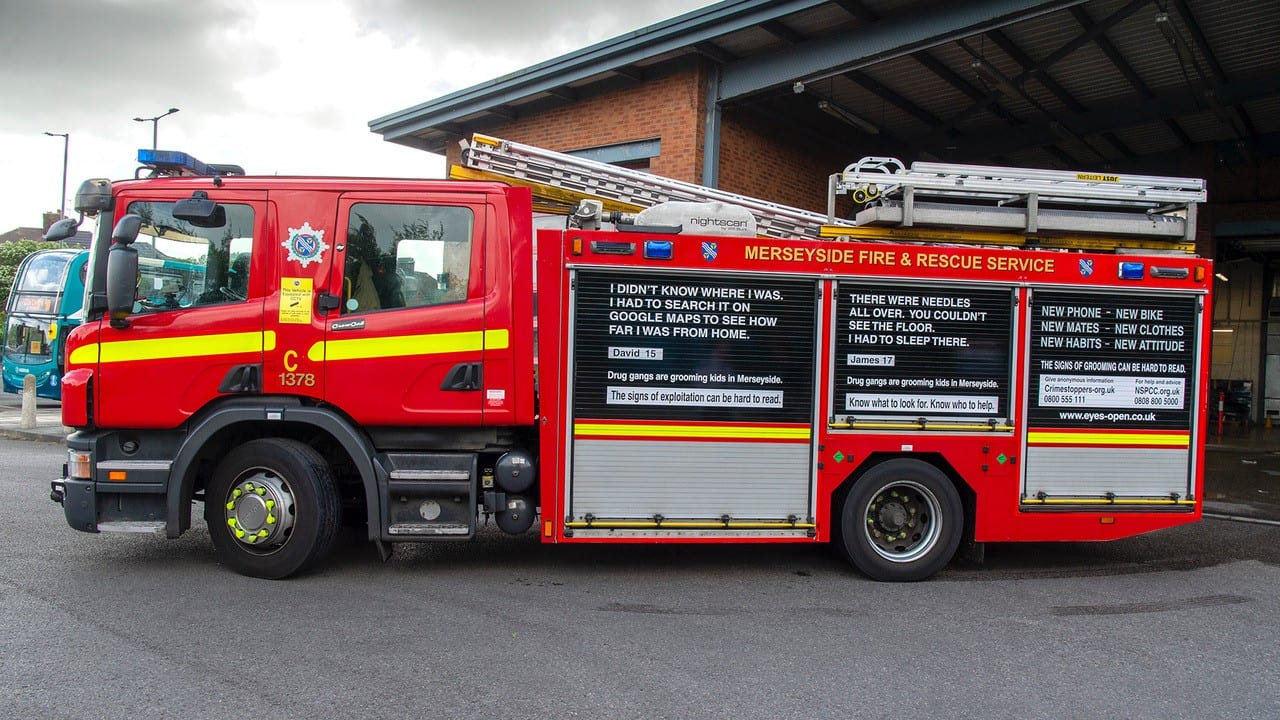 Posters and billboards are up around Merseyside saying: “Know what to look for. Know who to help,” which will explain the signs of abuse that people need to look for and the real experiences from a kids’ point of view.

“The VRP launched its first hard-hitting campaign in March and it’s great to see that Merseyside Fire and Rescue have got on board and are helping to take its important message, increasing awareness of the criminal abuse of our children, across the region. 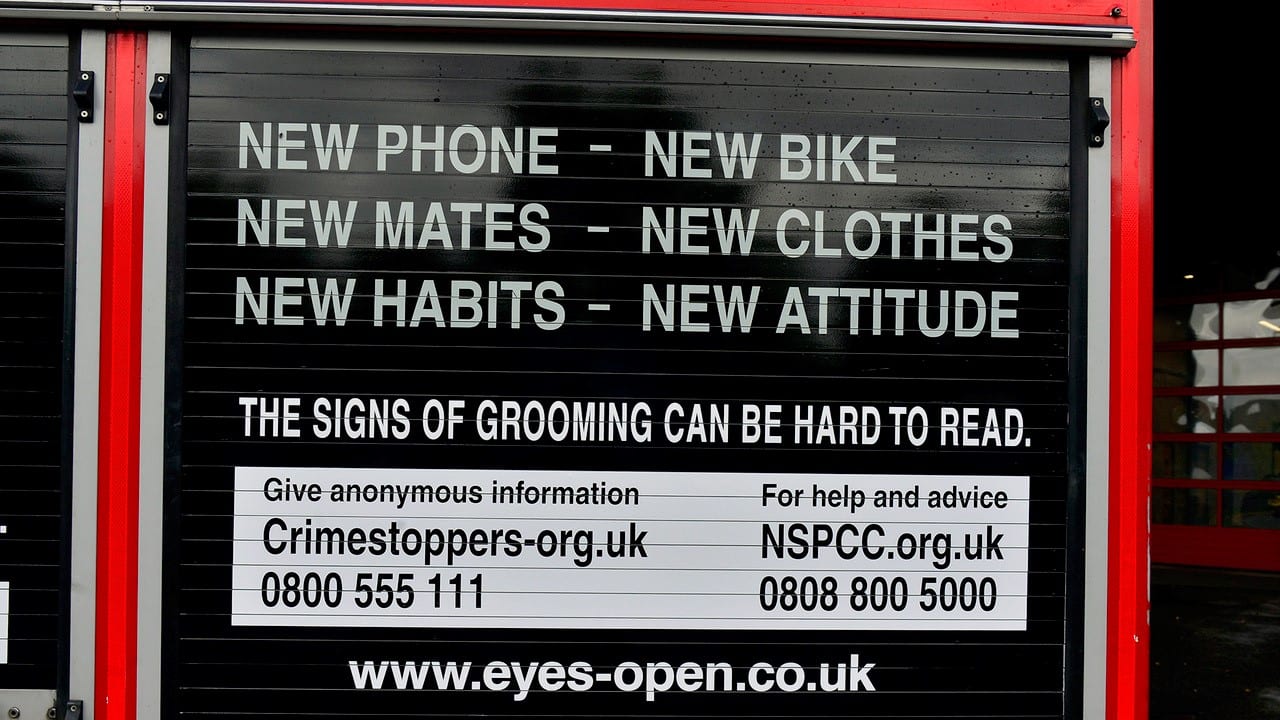 “All too often we do not notice or recognise the warning signs when a young person is being groomed for exploitation and even when we are worried we don’t know what to do.  We need the public’s help if we are to prevent young people falling prey to the criminal gangs and with the support of the fire support we can ensure even more people across our region know to keep their ‘Eyes Open’ to this kind of abuse.”

Merseyside’s VRP’s campaign was rolled out to other counties in the North-West including Lancashire and North Wales on 30 March, and it has an educational booklet available as a PDF download on the campaign’s website: www.eyes-open.co.uk where there is also the artwork and animation, which you can also see on www.ourmerseyside.org.uk.