More from Sunday's incredible Run for the 96 - The Guide Liverpool
Contact Us Advertise with The Guide Our Video Services Follow us:

More from Sunday’s incredible Run for the 96 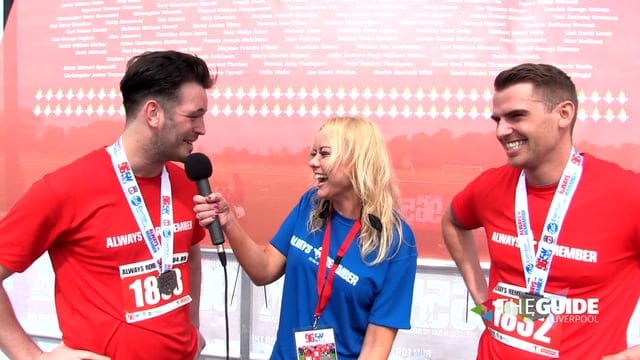 Home › Events › More from Sunday’s incredible Run for the 96

Our Claire Simmo was on hand to chat to runners before and after Sunday’s 5K run for the 96 at Stanley Park. Emmerdale actor Kurtis Stacey, The Guide Liverpool’s Dale Roberts and the man who created the run, Dom Williams all gave us their verdict on an incredible day, and it wasn’t only the 5K run that Don had completed – he also ran from Hillsborough to Anfield in the space of 24 hours.

Two thousand people pulled on their trainers and put their football allegiance to one side for the day to take part in the second annual Run For The 96 5K in Liverpool.

Runners wearing red and blue commemorative T-shirts stood side by side on Sunday (22 May) for the community legacy fun run in Stanley Park – a fitting location between Liverpool’s Anfield Stadium and Everton’s Goodison Park.

The overall aim of the Run For The 96 5K is to celebrate the lives of the 96 Liverpool fans, who were unlawfully killed in the Hillsborough tragedy on 15 April 1989.

Run For The 96 5K also remembers the families of The 96 and the survivors, who have tirelessly fought for justice with dignity for 27 years.

Hillsborough Family Support Group Chairman Margaret Aspinall was applauded as she took to the stage to welcome the runners to Stanley Park and, on behalf of the families, thank the crowd for taking part.

As the run started, a number of runners formed a long queue alongside the stage just to shake hands with Margaret before they set off on the 5K.

“Run For The 96 5K shows everyone what Merseyside is all about. You’ve got Everton and Liverpool fans wearing the blue and red T-shirts, running to remember The 96 and raise funds for two good causes, the Liverpool FC Foundation and Everton in the Community. It’s amazing.

“This brings the whole community together and it is such a lovely tribute to The 96, what a legacy. Everyone in Liverpool deserves credit in our fight for justice. It’s such a special place and I am so proud of my city.”

Margaret was joined by former Liverpool Football Club manager Rafa Benitez, whose family was taking part in the 5K run and was a surprise special guest on the day.

Since his time at Anfield, Mr Benitez has developed a strong bond with the Hillsborough families. He also proved popular with the crowd, posing for photographs and signing autographs.

“This is a day to enjoy and remember. My family took part. I love the city, I love the fans and Liverpool is home. Run For The 96 5K is a great idea to support the families and the memory of The 96.”

“This is a symbol of what the city has been through over the last 27 years, having to fight together against forces from outside. People can wear their colours, red or blue, but it’s really all about one thing – everyone standing together and solidarity.”

The big surprise of the day was a plane flying the banner Always Remember 15.04.89 over Stanley Park to the sound of football club anthems You’ll Never Walk Alone and Z Cars.

This was followed by a minute’s applause for The 96. The crowd set off on their 5K fun run to the sound of The Justice Collective’s cover of The Hollies’ classic He Ain’t Heavy, He’s My Brother – the song which unites Liverpool and Everton and shows the solidarity of the red and blue sides of the city.

Participants included runners from Scotland, the Midlands and Northern Ireland, who travelled to Liverpool especially to take part. A number of runners in Ireland and Australia also ran their own 5K at the same time to remember The 96.

Run For The 96 5K is the brainchild of Dom Williams who, together with 14 fellow runners and support crew, ran from Hillsborough to Anfield in less than 24 hours covering approximately 75 miles.

Dom and the team lay flowers at the Hillsborough memorial at Sheffield Wednesday on the morning of Saturday, 21 May. They ran through the night and arrived at the Isla Gladstone in Stanley Park just in time for the 5K.

He developed the idea of Run For The 96 5K with race organisers BTR Liverpool to create a new 5K community legacy fun run as a way of engaging the wider community to run to remember The 96. BTR organise and deliver Run For The 96 5K.

Participants were invited to fundraise for the Liverpool FC Foundation and Everton in the Community, the charitable arms of the city’s two football clubs to enable them to continue their fantastic work across Merseyside.

The charity element is a key part of the event’s commitment to ensuring that local communities benefit from the legacy run. All funds raised or donated by those taking part are split equally between the two charities.

Last year, £8,113.32 was raised for the Liverpool FC Foundation and Everton in the Community through the event – therefore each receiving £4,056.66.

People can fundraise or make donations by visiting the official Virgin Giving page at https://tinyurl.com/h2c3pmz

Runners and their families had plenty to enjoy alongside the 5K itself – a relaxation area hosted by Crabbies, inflatable football from the Liverpool FC Foundation, and live entertainment on Everton’s Fanzone stage.

The entry fee for Run For The 96 5K pays to stage and deliver all aspects of the event. All participants received a special commemorative red or blue technical T-shirt to wear for the run, a medal and a goody bag.