Do you know anyone between the ages 13 -25 with a passion for music? Then the LIMF Academy programme could be just what they are looking for.

Aimed at artists, bands, producers/DJs from across Merseyside, the award-winning LIMF Academy gives talented individuals exclusive access to activities and insider know-how from the music industry.

To find out more and to get involved see https://www.limfestival.com/limf-academy-applications-open/ 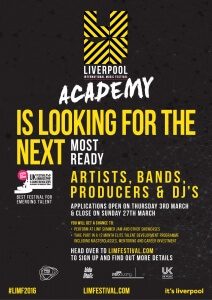 Read on to see what some of our previous academy artists have accomplished by being part of the award-winning programme.

Showcased at LIMF Academy 2013, this talented five-piece vocal group have since been signed by Decca Records, toured the UK and won a MOBO Award.

One of the LIMF Academy 2014 ‘Most Ready’, XamVolo has a signed production and management deal to add to his list of achievements as well as major co-signs by BBC Radio 1, 6 Music, BBC 1Xtra, Radio X, Bido Lito, The Skinny and Jazz FM.

Named one of the ‘Most Ready’ in 2015, this producer-DJ has really embraced what the LIMF Academy has to offer, bursting on to the UK Scene with his debut single ‘Can’t Say It Back’ featuring 2014 Academy graduate, Luke Cusato. With regular airtime on BBC Introducing and BBC Radio 1Xtra, the future is certainly looking bright for Michael Seary.

Shortlisted in 2014 as one of the ‘Most Ready’, Little Grace has gone on to sign with 2Tone management and secured a number of collaborations with key UK producers including Diztortion. The band has also featured on TC’s single ‘Show Some Love’, which was play-listed on BBC Radio 1Xtra, along with many more stations across the UK.

This singer-songwriter was named one of ‘Most Ready’ in 2014. Performing at key festivals including FestEvol and Liverpool Sound City, with co-signs coming from GetIntoThis, Bido Lito! Magazine and The Skinny, Katy Alex has quickly become one of the city’s most exciting talents.