Must see artists at FestEVOL this weekend - The Guide Liverpool
Contact Us Advertise with The Guide Our Video Services Follow us:

Must see artists at FestEVOL this weekend 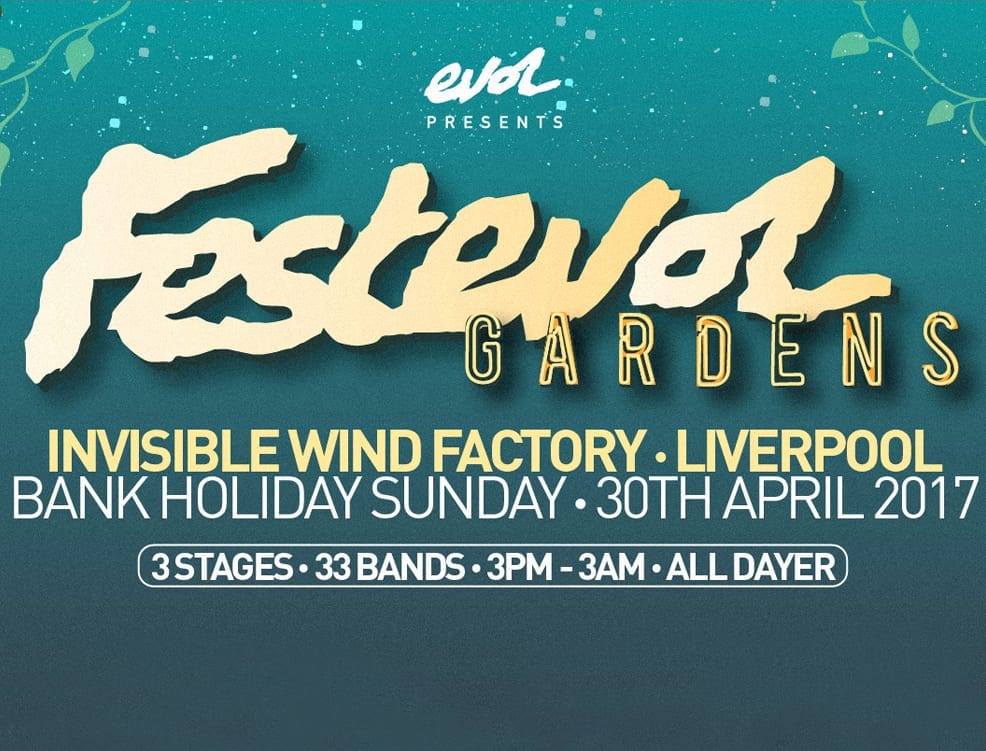 Home › Culture › Must see artists at FestEVOL this weekend

We feared for FestEvol when we were forced to say goodbye to the legendary Kazimier, but 2016’s edition showed us that we had nothing to be afraid of as the alternative music weekender found host at Camp and Furnace. This time around we will find ourselves at one of the cities newest venues, the Invisible Wind Factory, and, after the resounding success of the festivals first, inspired venue change, we are in for a treat. With 3 stages, and only one day, how can you pick who to see? Well, that’s where we come in. 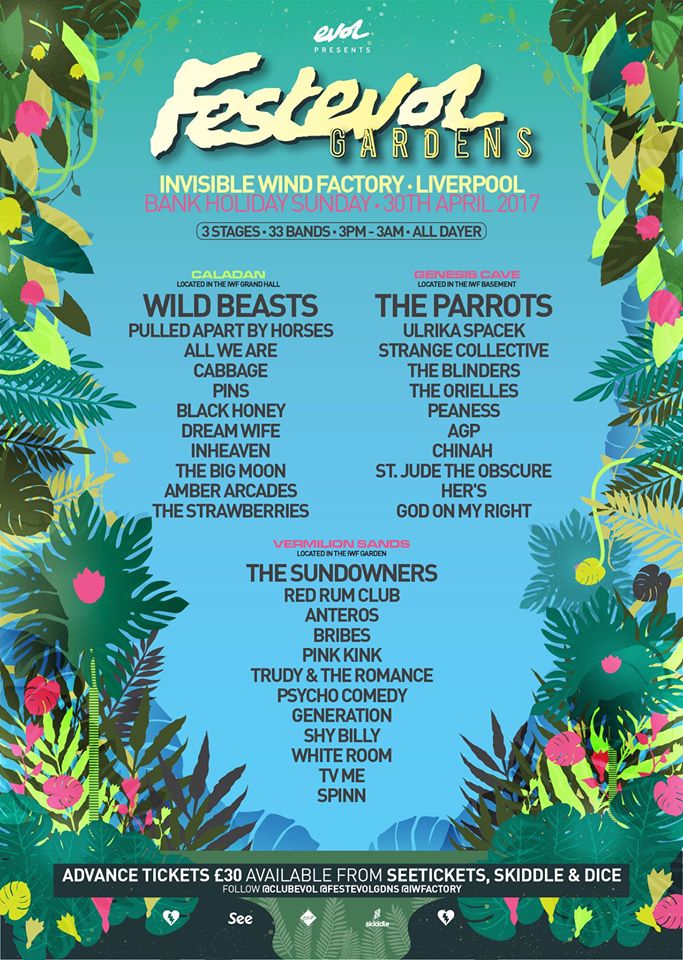 Here are our must see acts for FestEvol Gardens 2017.

After taking just once glance at the line up we knew that these guys had to be on our must see list. This Hard Rock 4 piece put on one hell of a show, with enough energy to power a city. The Leeds based band have just released their 4th studio album, The Haze, an album that is packed full of high octane, pumping, no nonsense Rock music, with anthemic choruses and hard hitting riffs. If you’re anywhere near the Caladan Stage on Bank Holiday Sunday, then these guys will be hard to miss. But, then again, why would you want to?

All We Are are doing it for the local scene, not just at FestEvol, but all over the UK, and Europe. If you’ve managed to somehow miss out on the hype that has been ever growing for this Indie 3 piece then fear not, as 2017 has already seen them release some new music, having been played on Radio 1, with more already on the way. The mix gender group have started taking a political approach to song writing in recent times and, we suspect, this message of defiance that can be seen through their new music will rear its head during their live set, just before Pulled Apart By Horses on the Caladan Stage.

If you have never seen The Sundowners live then you need to make time this weekend. A psyche folk mix of dreamy pop music which will fill your ears with a sound that is completely unique to them, and best of all they are from right here on Merseyside. Signed up to Skeleton Key, a brand new album released and a huge roster of gigs and festivals this summer, things really are looking sunny for our favourite Wirral band. ‘Cut the Master’ was released just last week and you can see them live headlining the Invisible Wind Factory garden stage this weekend.Download The Sundowners – Cut the Master via ITunes here

Her’s might be a new name for you, however, it shouldn’t be. This ‘dream-pop’ duo has been making big waves in the UK underground scene, although rather quietly it seems. The LIPA graduates have released a string of singles, all of which showing a level of development that is hard to not be stirred by, with their latest single, ‘I’ll Try’, showing the pair at their best to date. This year will see Her’s release an 8 track, extended E.P, something that is sure to take them to the next level and beyond. Therefore, get down to the Genesis Cave Stage at this year’s FestEvol Gardens to get on the bandwagon nice and early. 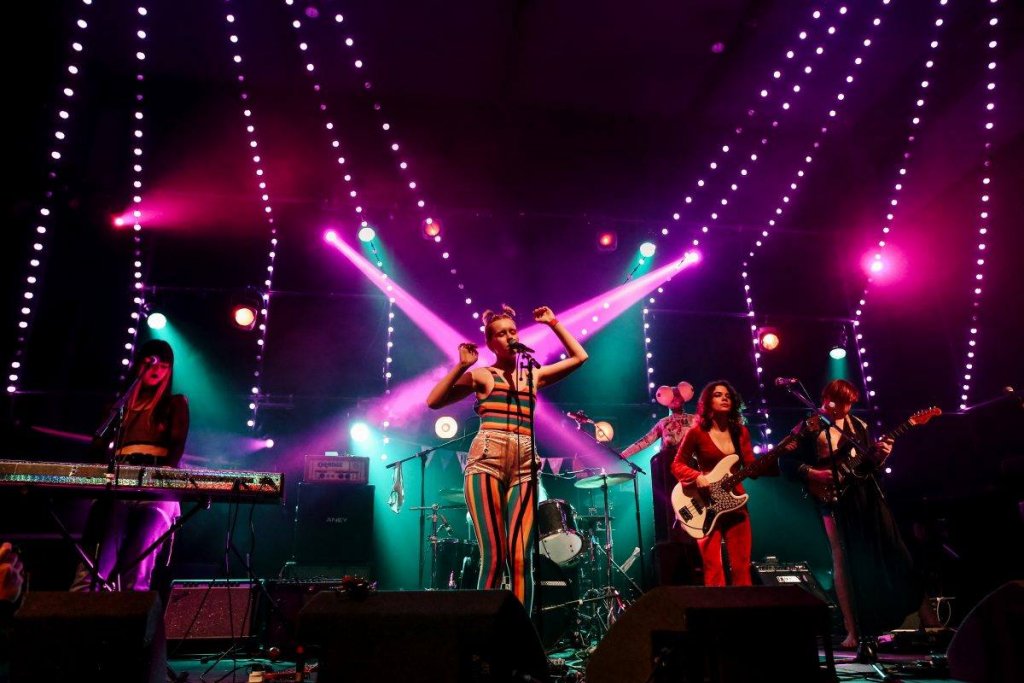 Another LIPA band joins the list of must see acts at FestEvol 2017. This one, however, has been going about their business a little less quietly than Her’s. It is near impossible to not spot Pink Kink around the city as they seem to be on every festival, showcase or general gig poster plastered hither and yonder. If you have somehow been colour blind to this pink sensation, then FestEvol is the perfect time to catch them, on the Vermillion Sands Stage. The provocative 5 piece, consisting of 4 girls and 1 boy, aren’t afraid to show you what they think through their music, lyrics and performance, drawing upon psychedelic influences to create their sound and image. Another for the future we think.

FestEvol has always been about bringing the best and brightest of the Indie-Rock/Pop and Psychedelic music to Liverpool. One thing that seems to go hand in hand with that is attitude. The festival has a knack of bringing some of the most outspoken, outrageous and out of this world acts to its stage. This year is no different, and, even though we the Hard Rock He-Men that are the boys in Pulled Apart By Horses, Black Honey take the prize for most attitude. The female fronted Indie-Rockers will bring their classic, Punk-esque live set to the Caladan Stage; a live set that always has the potential to go down in history as the start of a movement. If you want to be part that, then make sure that you’re there, front row.

As we said, FestEvol is quite accomplished at bringing the weird and wonderful through the ranks, and they are doing it again for another local band. Strange Collective describe themselves as a Garage-Psychedelic Rock band, something that will sound inaccessibly strange to some, but strangely accessible to others, especially those who will be in attendance at FestEvol. The Scouse 4 piece are really making headway through the industry, in the old fashioned way of playing live, playing live and…you guessed it; playing live. One thing that these guys have going for them is that they are playing live with a set of quality Rock tunes. Be sure to catch these local lads on the Genesis Cave Stage.

It would be rude to not include the headline act of the festival wouldn’t it? Well, it’s a good job that this years headline act is too good to be ignored. Wild Beasts have been grafting away for many years, finding their big break in 2008, and not looking back. Their latest album, Boy King, was released last year and 2017 sees them battling for the top stop on many a festival bill against the likes of Ocean Colour Scene and Editors. Well, here in Liverpool they claim the top stop and are sure to show us exactly why when they take to the Caladan Stage to top off what promises to be a rather ‘full on’ day of live music.

FestEvol takes place on Bank Holiday Sunday, 30th April, kicking off at 3pm and ending 12 hours later. It’s sure to be a big way in which to enjoy the long weekend, so if you’re heading down, let us know who you want to catch at [email protected], and if not, then what are you waiting for?

Get your tickets here: www.seetickets.com/event/festevol