Over 1000 people turn up at Stanley Park to 'Run For The 97' - The Guide Liverpool
Contact Us Advertise with The Guide Our Video Services Follow us:

The eighth annual Run For The 97 5K returned to Stanley Park last weekend for what was a poignant, emotional, and uplifting event (Saturday 21 May).

Just over 1,000 participants donned specially designed yellow T-shirts carrying the number 97 as they walked, jogged and run to remember The 97, completing either a 5K fun run or 1 Mile for youngsters.

The event was last staged in 2019 due to the pandemic, so all involved were delighted to once again come together.

Official charities for the 2022 event are Jamie Carragher’s 23 Foundation, LFC Foundation, Everton in the Community, and Stanley Park junior parkrun – all support the vision of creating a legacy to honour The 97 while ensuring local communities benefit through their work. 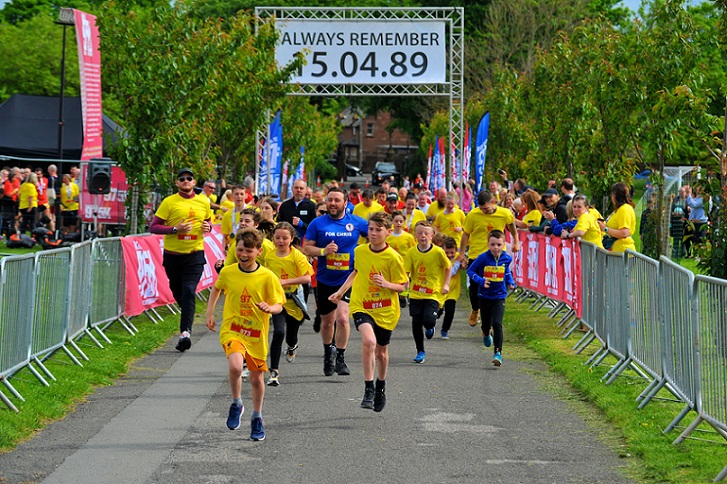 First staged in 2015, the community legacy event was created to celebrate and honour the lives of the then 96 Liverpool Football Club fans lost in the Hillsborough tragedy. It also remembers the families and survivors, who have since tirelessly fought for justice with the utmost dignity.

Run For The 97 now also honours Liverpool FC fan Andrew Devine, who sadly passed away in July 2021. Andrew received life-changing injuries at Hillsborough, he died 32 years after the disaster. 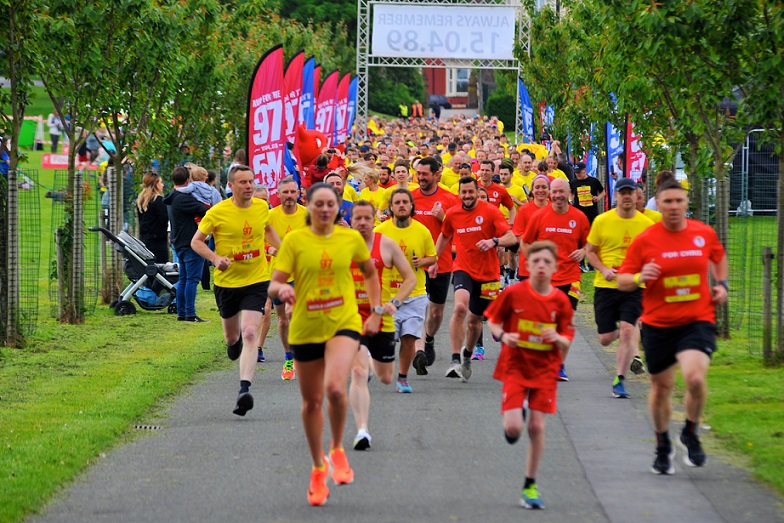 The event also featured stadium announcers from both sides of Stanley Park. Liverpool FC’s Voice Of Anfield George Sephton has supported Run For The 97 from the very beginning. Stage activity was hosted by Graeme White from Everton FC’s Goodison Park.

Jamie Carragher from the 23 Foundation explained:

“Run For The 97 is brilliant. It’s perfectly situated in Stanley Park between our two great football clubs. We’re all out in force to remember The 97, everyone gets involved – Reds and Blues. The calls for a Hillsborough Law are vital, taking the story into schools and educating our young people about what happened and why it happened – it’s just so important our future generations are taught about it.”

“It’s a fantastic event, Everton and Liverpool fans all joining together – that’s what is fantastic about this city. I just love being from Liverpool.” 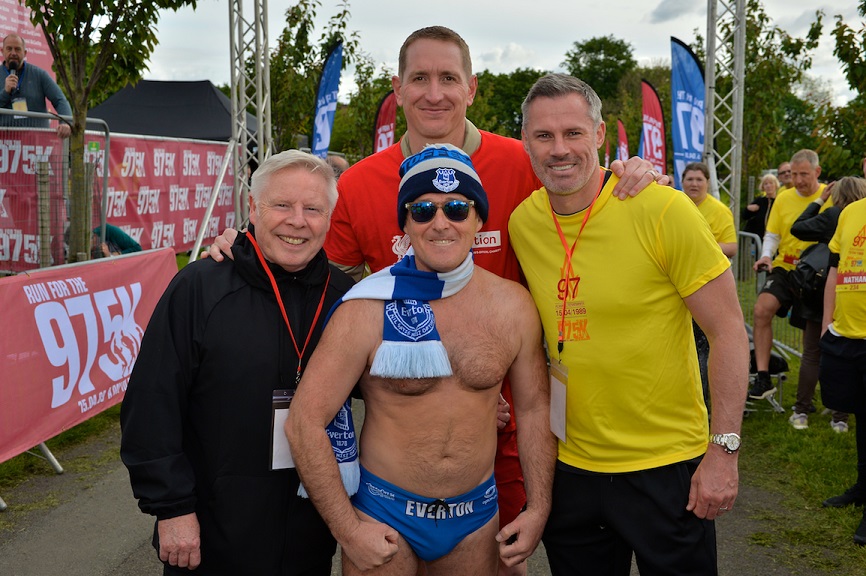 Dennis Adelsberg was the most senior runner on the day. The 92-year-old from West Lancashire runs for Skelmersdale Boundary Harriers. He took part and ran the 5K route with Speedo Mick. 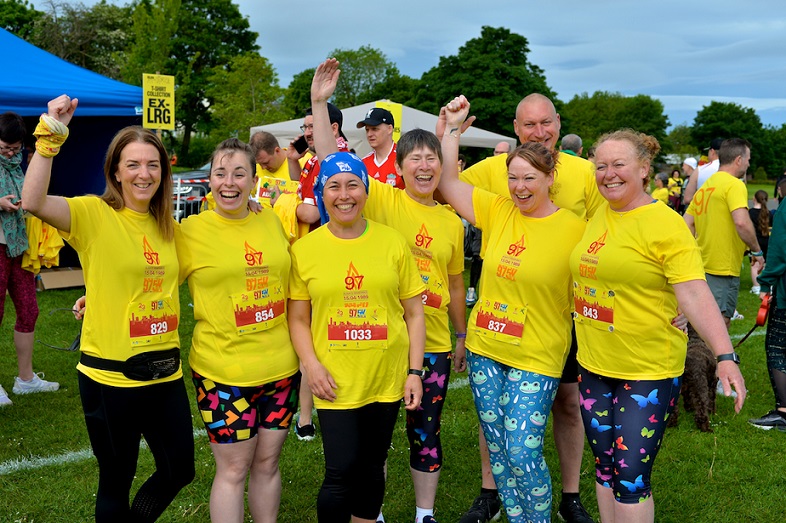 Reds and Blues stood side by side as football club anthems, Liverpool FC’s You’ll Never Walk Alone and Everton FC’s Z Cars were played as runners gathered before the fun, with everyone taking part in a minute’s applause to remember The 97.

The 5K runners crossed the start line to the sound of The Justice Collective’s cover of The Hollies’ classic He Ain’t Heavy, He’s My Brother – the song which unites Liverpool and Everton and shows the solidarity of the Red and Blue sides of the city. Youngsters running in the 1 Mile started to the sound of The Farm’s Altogether Now. 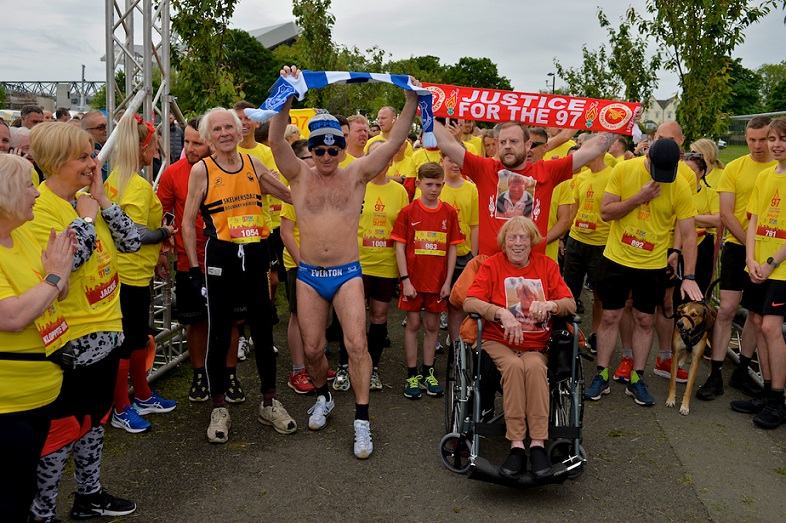 Everyone taking part was presented with a special Run For The 97 commemorative medal.

A regular on match days at Anfield and Goodison, Fans Supporting Foodbanks were grateful for generous donations of food items to help vital work in the community to support families.

The event was supported by volunteers teams representing Everton in the Community; LFC Foundation; Liverpool Running Bugs; and members of the Merseyside running community.

Funds raised through this year’s event – either through runners being sponsored or one-off donations to support the charities – have already surpassed the £4,000 mark. 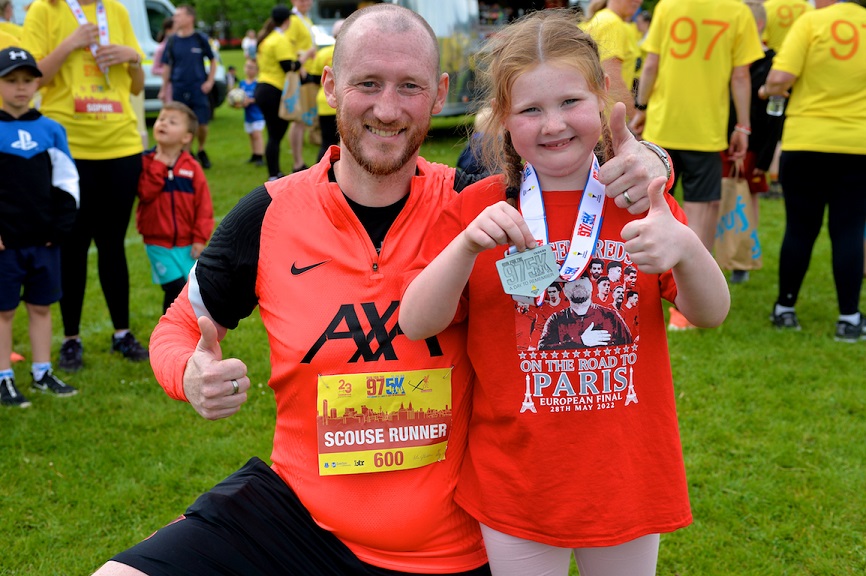 Everyone who took part in Run For The 97 or made a donation will be entered into a draw to win football prizes.

As well as runners across the UK, virtual runners also took part overseas in Austria, Canada, Denmark, Finland, Germany, Hong Kong, Ireland, Jersey, Netherlands, Northern Ireland, Norway, Singapore, South Africa, Switzerland, and 58 entries from across America. Virtual runners were sent their run number and medal, and they have submitted images to be used in an online gallery to showcase the reach of Run For The 97 across the world. 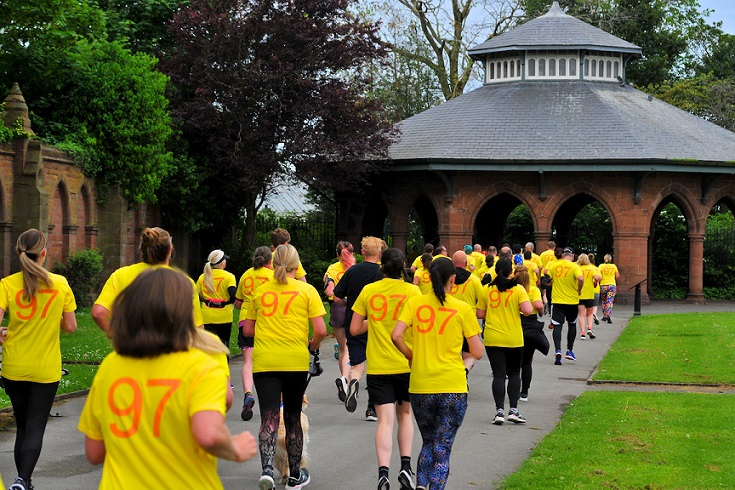 BTR Liverpool organise and deliver Run For The 97. BTR Liverpool is the leading independent organisation for creating, managing and delivering headline running events across Liverpool City Region. Its extensive portfolio covers various distances across different terrains, all with an ongoing commitment to sustainability.

The RFT97 entry fee pays to stage and deliver all aspects of the event including run numbers, T-shirts and medals, and event day facilities.

The date of next year’s Run For The 97 will be announced following the confirmation of the Premier League Season 2022/2023 football fixtures.

All monies raised will be split equally between the four official charities to support vital community outreach programmes. The official Just Giving online donation page can be found here.