Pete Price takes you to St Helens Theatre Royal to meet Amy Childs & the cast of Aladdin - The Guide Liverpool
Contact Us Advertise with The Guide Our Video Services Follow us: 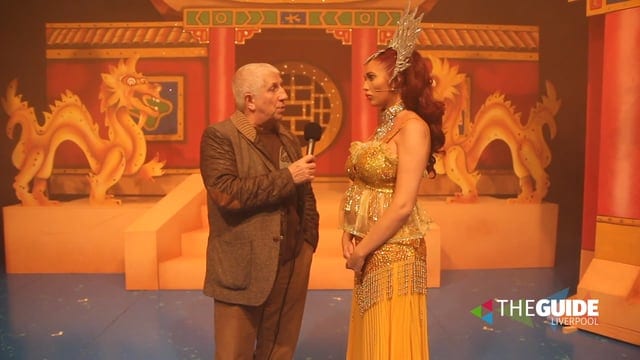 Aladdin has flown into St Helens Theatre Royal taking the audience on a magic carpet ride to Old Peking – a journey full of fun, laughter and surprises…

This year panto legend Pete Price is on a mission to visit as many Christmas shows and casts as he can in the run up to Christmas. Watch as he brings you all the craziness of panto on screen to The Guide Liverpool.

Amy Childs and Harry Derbidge – from TV reality show The Only Way is Essex have swapped the streets of Brentwood to tread the boards at St Helens Theatre Royal where they will appear in Aladdin until Sunday, 8th January 2017.

Gorgeous redhead Amy Childs adds a touch of glamour as the Slave of the Ring in the magical family pantomime while Essex Top Boy Harry Derbidge will play the hilarious PC Noodle. No doubt Harry, the catchphrase king, will be swapping the famous Aladdin line “Open Sesame” for the TOWIE catchphrase “shut uuuup” doing the panto!

Amy and Harry will be joined on stage David Heath who will play street rat Aladdin. David found fame following his appearance on ITV’s Saturday night favourite X Factor as a member of Liverpool born boy-band Eton Road, finishing fifth in the third series of the popular show.

Every pantomime needs a bad guy and Warren Donnolly is bound to receive lots of “boos!” as Aladdin’s nemesis Abanazer. Warren is best known for his role as Stan Waterman in Channel 4’s hit series Shameless. His most recent credits include roles in Coronation Street and Holby City.

Harry Potter star Josh Bennett who played Gringotts Goblin in Harry Potter and the Deathly Hallows: Part Two and also appeared in Seven Dwarves will play the Genie of the Lamp.

St Helens Theatre Royal regulars will be pleased to see the return of its resident panto favourites Ben Engelen as Wishie Washie and Simon Foster as the dame Widow Twankey. Ben and Simon have each performed in numerous pantomimes at St Helen’s Theatre Royal. Ben’s performance as Button’s in the 2015 production of Cinderella was coveted as “A stand out performance” when reviewed by North West End while in the same review Simon was credited as the character who “got the audience going.”

Chantelle Nolan, Theatre Manager said: “The rehearsals for Aladdin have been going really well so far and the TOWIE stars have settled in well in St Helens – I just know everyone is going to love them – they’re hilarious!

“I can’t wait for everyone to see out panto this year which is bigger and better than ever before. We have a really strong cast and lots of surprises up our sleeves!”

So join the cast of Aladdin when this amazing panto Aladdin swoops into the theatre to take audiences on an adventure filled with enchantment, hilarious comedy, wonderful songs and a story which would make even evil Abanazar’s heart melt.

Book your tickets now – you’ll be “well jel” if you miss it!

The Theatre gives people the chance to enjoy pantomime in a supportive and less formal atmosphere specially designed for audiences with an Autism Spectrum Condition, sensory and communication disorders, or a learning disability.

“Just fantastic. I’ve waiting 9 years to be able to take my autistic daughter to the pantomime” Mother on Cinderella relaxed performance 2015/2016.