Seminar calls for city-wide partnership to tackle rough sleeping - The Guide Liverpool
Contact Us Advertise with The Guide Our Video Services Follow us: 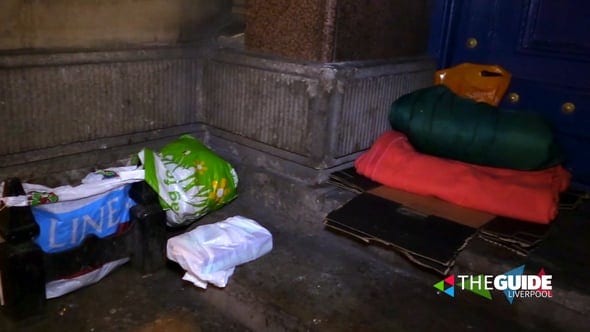 A year after the opening of Liverpool’s Labre House rough sleeper shelter, the city council is calling on everyone to pledge to do their bit to make rough sleeping in the city a thing of the past.

Business leaders, community and voluntary groups and representatives from the media, culture and public sectors will converge on Liverpool Town Hall on Wednesday 12 December for the special event aimed at bringing people and organisations together to tackle homelessness and rough sleeping in the city.

Keynote speakers include Mayor of Liverpool Joe Anderson and the council’s Director of Adult Services, Martin Farran, who will outline the successes over the past year in reducing rough sleeper numbers through the Always Room Inside campaign.

The event marks the first anniversary of the opening of the council’s dedicated rough sleeper hub, Labre House, which is delivered by the Whitechapel Centre. Open every night of the year, Labre House provide shelter and access to a range of service to anyone who needs them, regardless of their background of circumstance.

In November alone, 266 individuals slept at Labre House for one night or more. The average nightly usage figure for the month was 76 people.

Liverpool City Council’s Deputy Mayor and Cabinet Member for Housing, Cllr Lynnie Hinnigan, said: “A year ago the council launched its Always Room Inside campaign and sent out the message that no-one in Liverpool needs sleep on the streets. Labre House has been a fundamental part of this plan. It is clear that it is being really well used and has given many people shelter and safety since it opened its doors.

“Labre House is not just somewhere for people to spend the night, it is the gateway to a host of services that can provide them with the support they need to get off the streets for good.”

“It is clear that Liverpool is leading the way in how it deals with people who are sleeping rough. However, rough sleeping is not an issue that the city council can tackle in isolation. We want to build on this first successful year and bring people from different organisations and backgrounds together to see how we can move forward and help more people.”

Other guest speakers on the day will include chief executive of the Liverpool Business Improvement District (BID) Bill Addy and David Carter, who is chief executive of Liverpool-based rough sleeper and homelessness support charity The Whitechapel Centre.

As well as Labre House, the council also funds an outreach team, delivered by the Whitechapel Centre that makes contact with the city’s rough sleepers on a daily basis to encourage them to come inside and a street lifestyle team which works with people begging in the city centre.

The vast majority of people and families In Liverpool who are faced with homelessness never spend one night on the streets thanks to the preventative work the council undertakes.

Last year the council’s Housing Options team made contact with more than 5,000 individuals and families who were at risk of homelessness, the vast majority of whom were supported to stay in their own homes.

The council is spearheading a new strategy around homelessness, which builds on the work done so far and looks at early intervention and prevention, developing economic resilience, making sure temporary accommodation meets the needs of the people who use it and supporting people who are homeless and have complex needs.

The seminar will also hear all about Liverpool City Council’s plans for a new purpose-built rough sleeper centre, Labre House 2. The new project will be a 24/7 service, including a ‘night hub’ together with a Health Zone where people can get physical and mental health support along with training and employment opportunities.

The event will also make the launch of a city-wide awareness raising campaign which will see the Always Room Inside helpline number and messages publicised in shopping centres, public spaces and train and bus stations.

Under the banner, Homelessness is Everyone’s Business, all those attending the seminar will be asked to sign a pledge outlining how they will support the Always Room Inside campaign in the future.

Mayor of Liverpool Joe Anderson said: “Liverpool does more than anywhere  to support those in dire need of help within our community. It is unacceptable that in the 21st century we are forced to dedicate so many of our resources to tackling rough sleeping and homelessness but we refuse to sit back and do nothing while people take to the streets.

“Over the past year we have seen some real success stories. People who have come off the streets and used the services we offer to make a change and turn their lives around. We want to build on this success with our partners and work together to make rough sleeping in Liverpool a thing of the past.”

If you have concerns about someone sleeping rough on the streets of Liverpool, you can call the Always Room Inside helpline: 0300 123 2041.