Sir George Martin Remembered - The Guide Liverpool
Contact Us Advertise with The Guide Our Video Services Follow us: 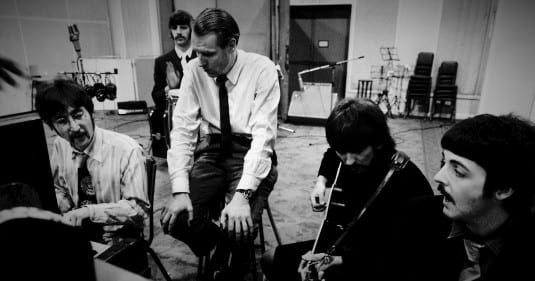 Many Beatles fans and music fans around the world will be shocked to have woken up to the news of George Martins passing at the age of 90. George was known as “The Fifth Beatle” by many and his work on each of the Beatles original albums is known by fans all around the world.

George signed the Beatles to the EMI record label on 9th May 1962, taking what was seen as a gamble, as the Beatles had been rejected by many major record companies. The Beatles at first didn’t have any appeal to George, he signed them while not being familiar with Rock and Roll – He liked Brian Epstein’s enthusiasm, Lennon and McCartney’s vocals and he liked how funny the Beatles were.

He auditioned the Beatles, asking afterwards if there was anything they didn’t like about the studio George Harrison said “Well I don’t like your tie for a start” – and this is where he was introduced to the bands humour, saying later “He would have signed them for their wit alone.”

The band recorded Love me Do which peaked at number 17 in the UK charts. George Martin wanted them to sing “How do you do it” but the Beatles insisted on one of their own songs (Martin later produced Gerry and the Pacemakers singing that song which was a huge success). The Beatles later recorded “Please Please Me” after George Martin rearranged the track – once the song was completed George famously said “Boys you have just recorded your first number one” – and that was the start of it all!

Georges influence on The Beatles can’t be understated – it was only surpassed By John, Paul and George Harrison. The Beatles turned to him for skills that were beyond their range, such as orchestration. George played piano for the Beatles as none of them could play as he could. They turned to George for additional instruments and for experiment – which they became increasingly known for. The success of the group gave him license to experiment both with their music and with the new technology that was made, notably stereo acoustics and multi-tracking. Suddenly producers had been given freedom. “The ability to paint sound rather than just photograph it” as George Martin said.

George Martin was undervalued by EMI, even after signing and producing The Beatles – So much so that he left them and set up his own studio called AIR, taking many of EMIs staff and artists with him. So frightened were EMI that they would lose the Beatles too that they agreed Martin could continue as their producer – Making him one of the first producers to get a royalty rate, as he was the first to insist that his name appear on the record.

He always acknowledged the passion, creativity and vision of John Lennon and Paul McCartney, the relationship between him and the group became more in the nature of a true collaboration, it reached its peak in 1967 with the making of Sgt Pepper’s Lonely Hearts Club Band. With this album, Martin felt the recording process was validated as an art form. The playing backwards of music or the splicing together of two versions of a song, one of the most notable examples of this was his realisation of the “tremendous build-up of expanding sound” with which Lennon wanted to end A Day in the Life. It was also Martin who determined the crashing piano chords with which the song ends, and who synchronised the four Beatles and himself as they pounded them out simultaneously on three pianos, an upright and a grand in the Abbey Road studios. Paul McCartney once said “George Martin was quite experimental for who he was, a grown-up.”

George Martin passed away on 8th March 2016 – After a career spanning seven decades. The Beatles are what he is most famous for, but he also produced and arranged for many more great artists such as Cilla Black, Gerry & The Pacemakers, Billy J. Kramer & the Dakotas, The Fourmost, David and Jonathan, and The Action, as well as The King’s Singers, the band America, guitarists Jeff Beck and John Williams, sixties duo Edwards Hand, Gary Brooker, Neil Sedaka, Ultravox, country singer Kenny Rogers, Cheap Trick, Elton John (including producing Candle in the Wind 97”) and Celine Dion. He also produced two of the best James Bond themes – Goldfinger and Live and Let Die.

His death is a sad reminder that the golden generation of music is passing on. It is a sad reminder that the artists that have shaped the way we see society today won’t always be around. While it’s a sad time, it’s a time to remember a life well lived – A life with a lasting legacy. Not only did he give 4 working class lads from Liverpool a shot when nobody else would, he was humble and gracious enough to give them creative licence in an industry of control. He was tough enough to not be walked all over by EMI, and he was talented enough to compose and create such amazing material in a studio with limited technology and resources. He was a man who wasn’t afraid to risk everything to create a legacy of beauty – We should remember him for this. 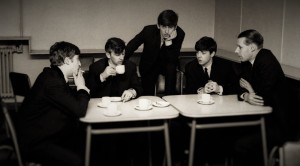 Thank you for all your love and kindness George peace and love xx?✌️?? #RingoStarr (@ringostarrmusic)

How very sad to wake to the news Sir George Martin has left us. He made my first Bond film sound brilliant! Sir Roger Moore (@sirrogermoore)

R.I.P. George Martin. Im so gutted I dont have many words. Thinking of Judy and Giles. Sean Ono Lennon (@seanonolennon)