The Armed Forces Day flag rises above the Town Hall - The Guide Liverpool
Contact Us Advertise with The Guide Our Video Services Follow us:

The Armed Forces Day flag rises above the Town Hall 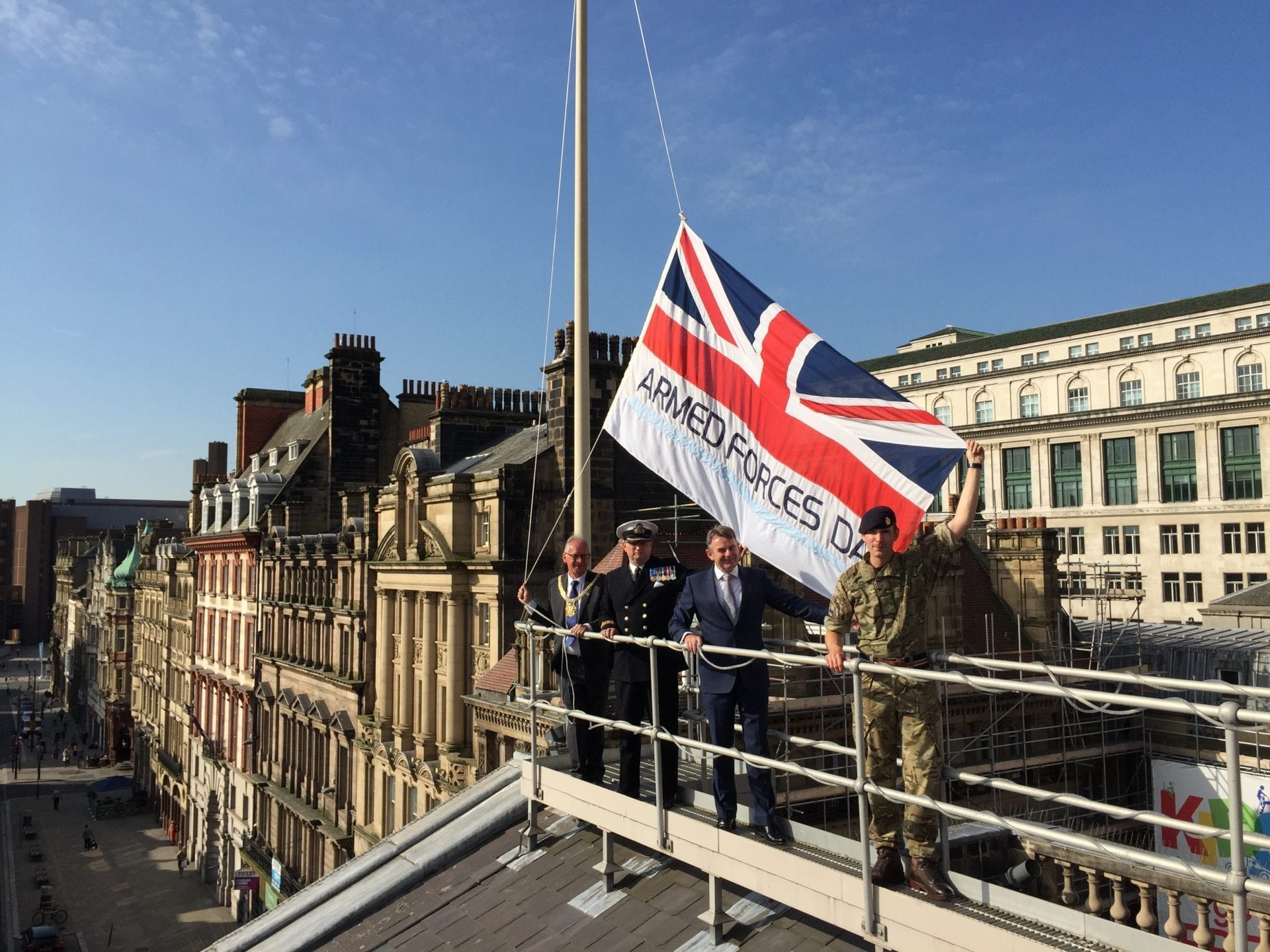 A sprinkling of magic will officially launch Liverpool’s national celebrations honouring servicemen and women next week.

On Monday 19 June, a special flag raising event will take place at the Town Hall which signals the start of the city’s Armed Forces Day festivities.

Hoisting the armed forces flag will be Lance Corporal Richard Jones who was crowned winner of Britain’s Got Talent in 2016 after wowing the judges with his magic act. He remains a serving soldier as part of The Band of The Household Cavalry. 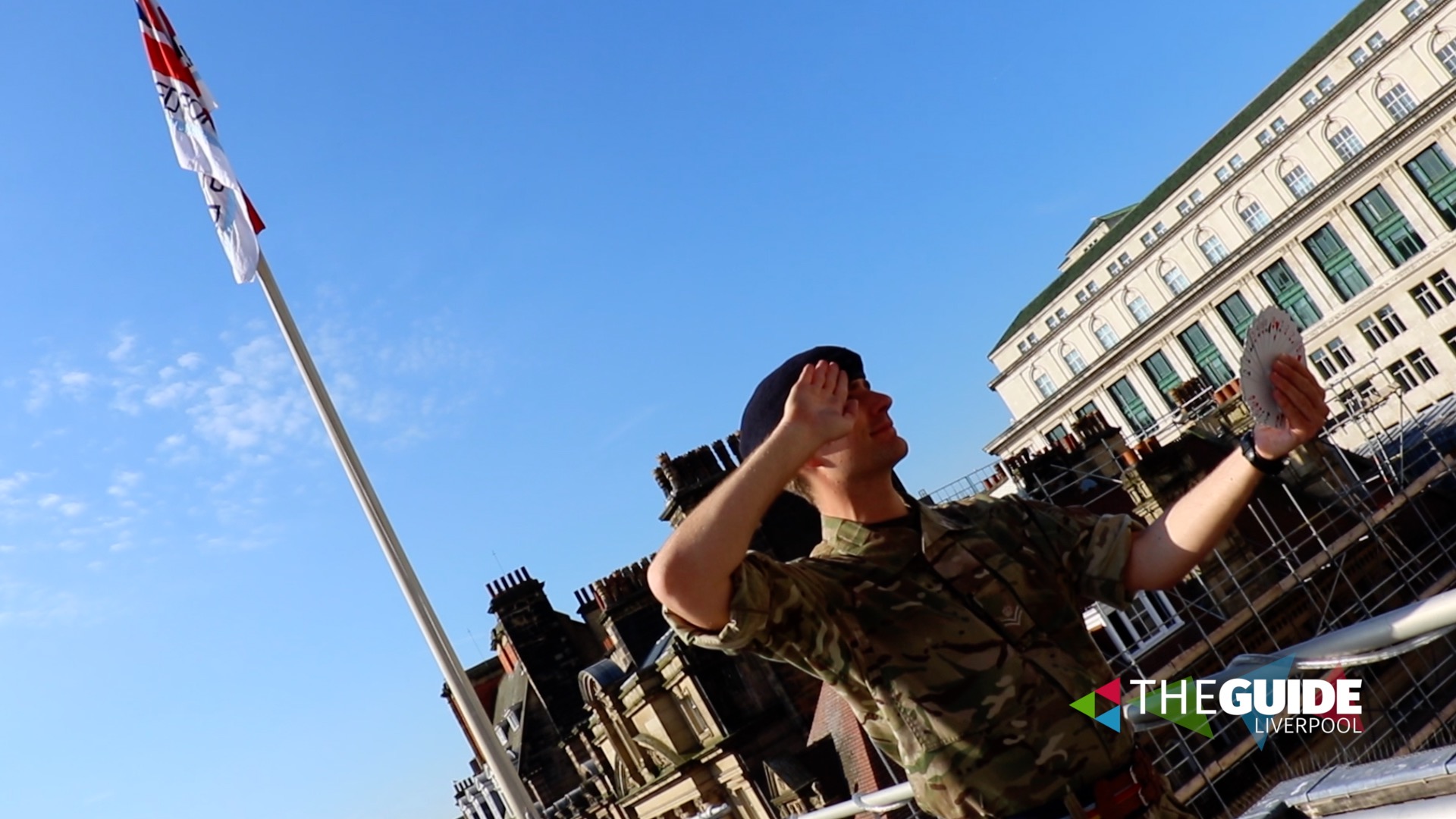 He will be joined by Lord Mayor Malcolm Kennedy, Commodore Phil Waterhouse and Cammell Laird Chief Executive John Syvret – the headline sponsors of the event. Together they will raise the flag ahead of Armed Forces Day on Saturday 24 June.

And from Monday, the Cunard Building will be lit up in red, white and blue each evening. A number of ‘Thank You’ banners will be put up on the front of St George’s Hall from Wednesday and the Hall will also be lit up, as will the Radio City tower.

Richard said: “I am delighted to be part of these hugely important celebrations. As someone who serves in the military, Armed Forces Day is a very humbling experience as the nation comes together to thanks those servicemen and women who go above and beyond for their country. 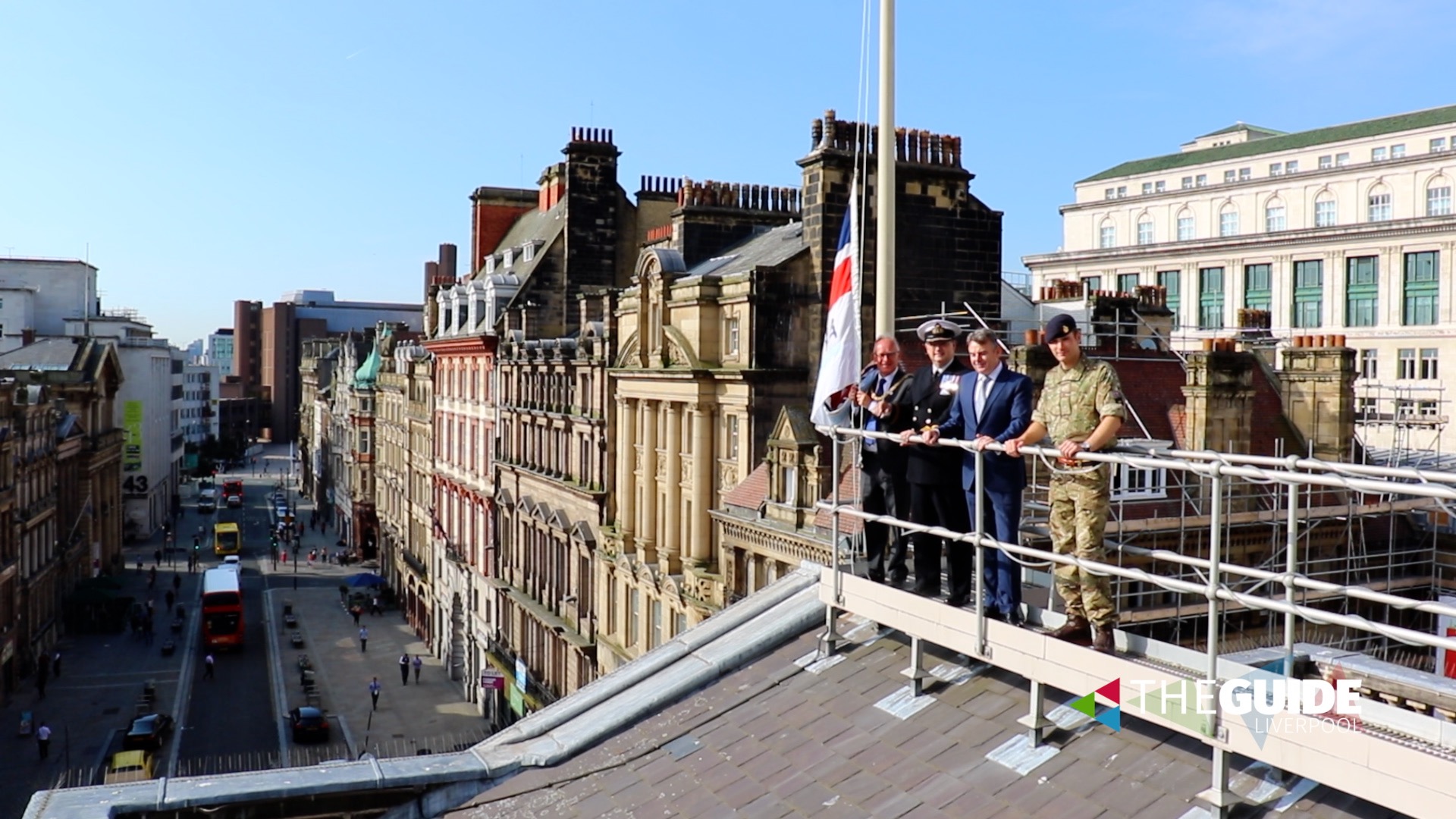 “Liverpool is such an iconic city with an instantly recognisable waterfront, so staging the event there will be a fantastic experience for all involved.”

Councillor Kennedy said: “Hosting Armed Forces Day is a huge honour. When it comes to staging large, outdoor, free events Liverpool excels and will always rise to the occasion when the national spotlight is shining on the city.

“Thanking those ordinary men and women in the armed forces who lead extraordinary lives is paramount, and the flag raising is the just beginning of a number of events which will make sure this city does the armed forces community proud.

“I encourage as many people as possible to be part of Armed Forces Day on the 24 June – we want thousands to line the parade route and head to the waterfront to be part of the, free, family friendly celebrations.” 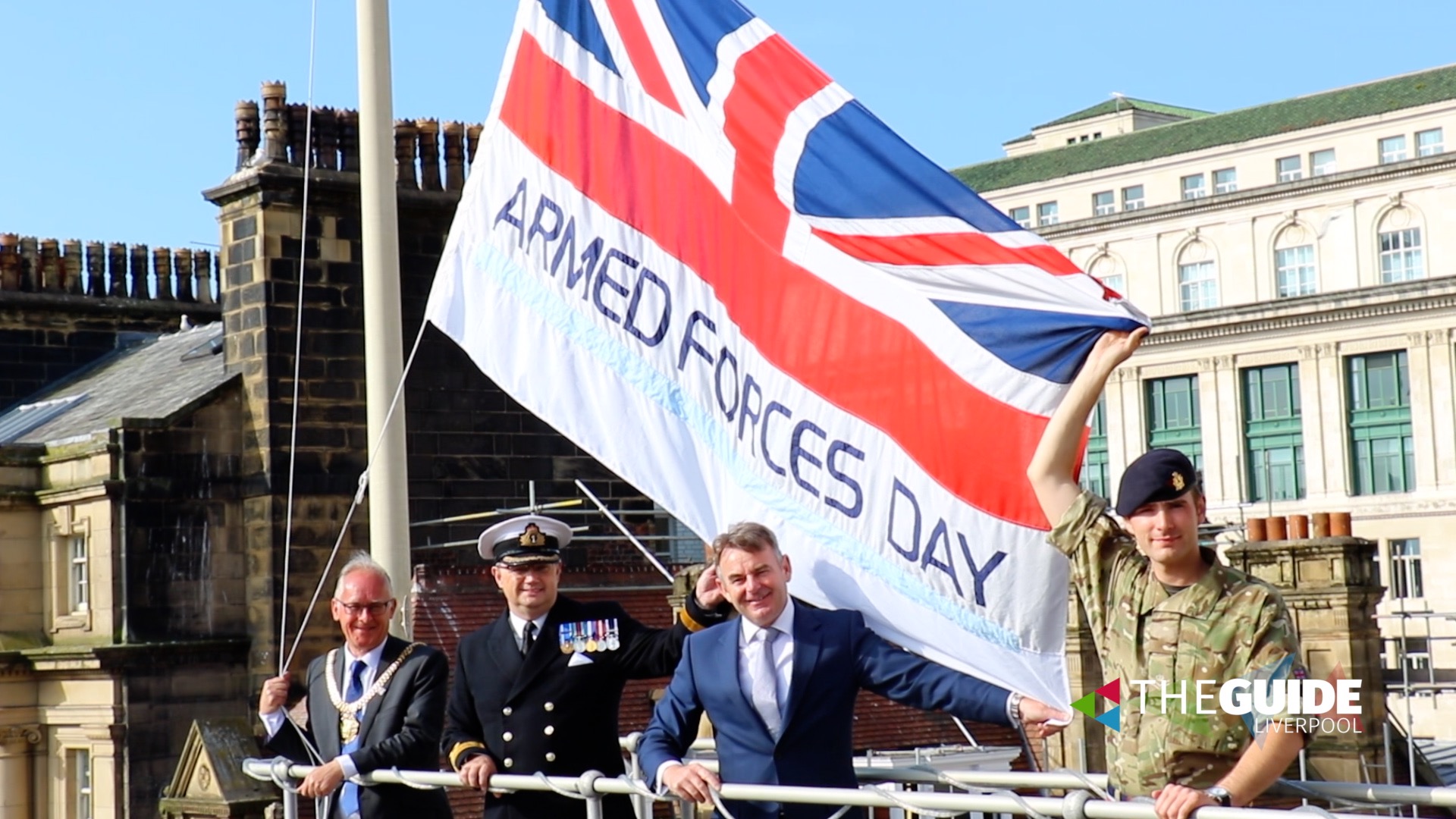 Commodore Phil Waterhouse, who commands the Royal Navy in Northern England, said: “The flag raising ceremony signals the beginning of Armed Forces week; I am so very pleased to have been asked to take part in it with the Lord Mayor.

“A tremendous amount of work has gone into the planning of the national Armed Forces Day event over many months by numerous organisations, all of whom have contributed massively.

“I and my fellow service personnel are looking forward immensely to engaging with the many thousands of people who will flock to Liverpool’s waterfront on Saturday 24 June.  We feel very humbled that the nation wishes to show their appreciation of sailors, soldiers and airmen, both past and present, as well as the wider Armed Forces family. It is sure to be a tremendous spectacle and one which the eyes of the nation will be upon.”

John Syvret said: “I had no hesitation in taking on the lead sponsor role to support the holding of the 2017 National Armed Forces Day event here on Merseyside. As a Birkenhead business it is brilliant to see Wirral playing a role in Armed Forces Day and the Mersey River Festival reflecting the great passion local people have for maritime. I am certain all the communities of Merseyside will turn out in their thousands to provide their support, and that our great city and region will provide a magnificent venue and spectacle for the nation.” 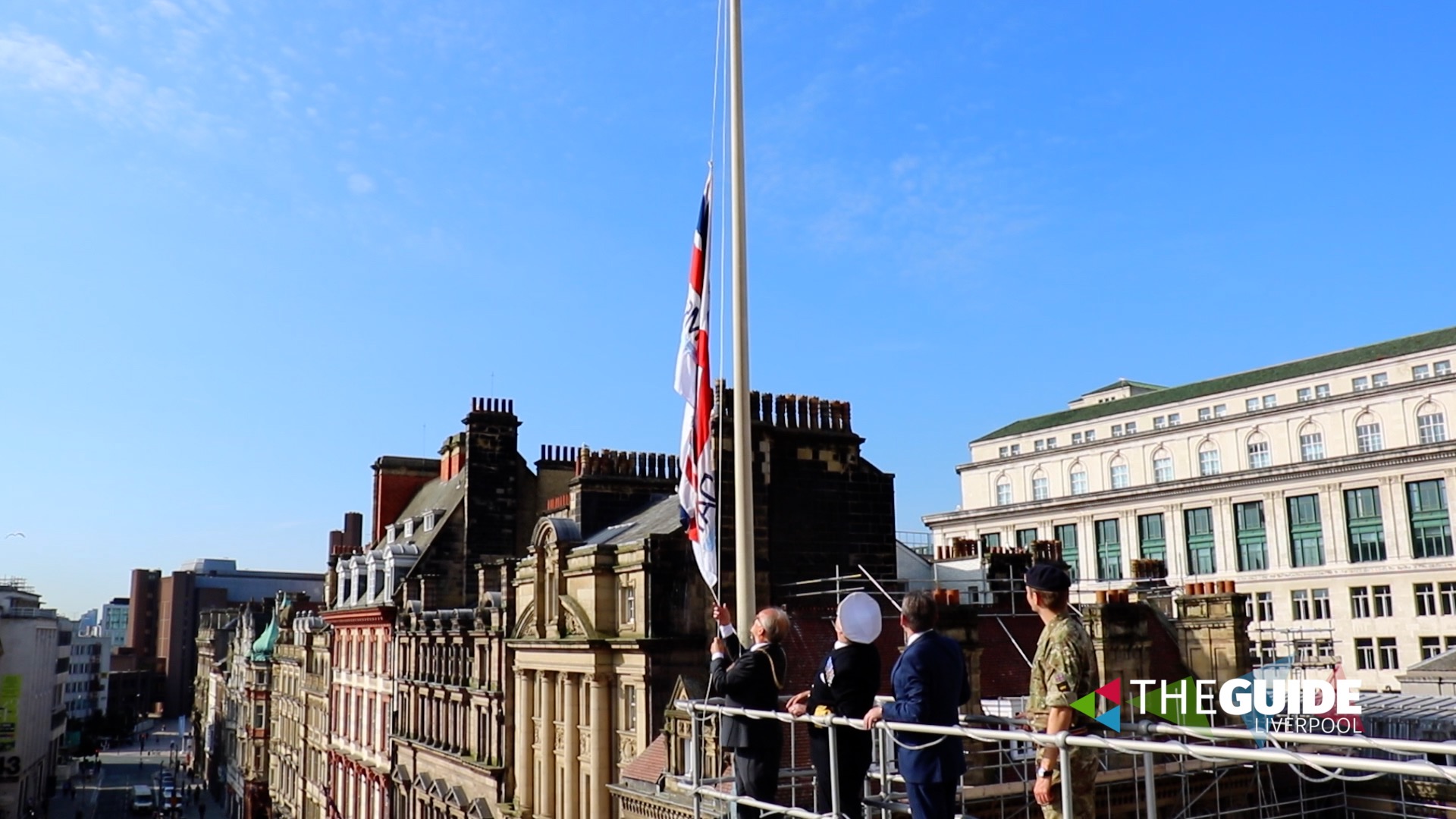 Armed Forces Day runs from 11am to 5pm on Saturday 24 June. The day begins with around 1,000 serving personnel, veterans, cadets and marching bands taking part in a parade, stepping off from St George’s Hall, travelling through the city centre and culminating at Princes Parade, Liverpool Waters, where a salute will be given by a number of special guests and dignitaries, including the Earl of Wessex. A Typhoon flypast will mark the start of the parade.

A Display Arena will be located next to Liverpool Cruise Liner passenger lounge which will give visitors the chance to see a number of capability demonstrations, ranging from a Royal Marines unarmed combat display and military marching bands right through to an Army bridge building demo and a field gun-race between a team from RAF Cosford and the aircraft carrier HMS Prince of Wales (the city’s affiliated ship). You can also watch the tri-services battle it out in a number of dragon boat races at Princes Dock.

Weather permitting, a number of flypasts will take place throughout the day involving aircrafts such as the Red Arrows.

For full details of the day, head to www.cultureliverpool.co.uk/whats-on