Former champion kickboxer Charlie Knox is making the big switch to boxing at the age of 10 – and The Guide Liverpool is backing him with sponsorship for his first competitive fights.

Charlie, from Maghull, won medals in the UK and abroad for kickboxing and was chosen to be on the GB team after taking up the sport when he was just four years old.

In lockdown he decided he wanted to get on his gloves and get into a different ring and now he’s training for his first boxing tournaments as Charlie ‘Knockout’ Knox.

“Charlie had been going to kickboxing since he was four and from the day he started he really loved it and was brilliant at it. But just after the first lockdown last year he went back a couple of times and he was edging away from it.

“He’s handy anyway and he’s always said he wanted to be a boxer, so I took him to a few gyms and he tried a couple of other things like MMA then we went to Conquer Fitness and he really liked it. 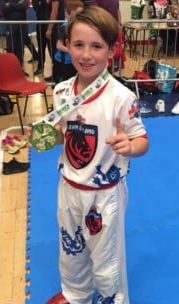 “He idolises Tyson Fury and he’s trained at the same gym so Charlie got to meet him and got a picture with him. He was made up with that and he really got on with his trainer Liam so that was it. He’s one of the youngest there but he’s fitted right in and he hasn’t looked back.

“He did have to work at the transition because in the beginning his leg would come up a bit and his footwork wasn’t right because there’s a big difference in the stance between kickboxing and boxing. But his coach recommended Powerstance which kept his feet in the right position for boxing and Charlie practiced at home and he soon got it.”

With gyms allowed to reopen, he’s been training every Monday, Wednesday and Friday, doing an hour and a half each session.

And if everything goes to plan with lockdown restrictions, Charlie – who has a younger brother Mikey and older sister Summer – is now preparing to enter his first competitive fights and tournaments.

He’s already been measured for his kit which The Guide is sponsoring and mum Justine is psyching herself up to watch her son make his boxing debut.

“My nerves are gone already,” she admits, “as soon as they told me he was going to be fighting my stomach turned. I will watch him, I’ve never missed a fight because Charlie’s used to me being there with his dad so I think he’d feel weird if I wasn’t.

“I’d quite happily sit at home and just get a phone call to say he’s won, or he’s lost, and I’d watch the fight afterwards but I think me not being there would give him more anxiety.

“My heart will be in my mouth though, and I make every move with him in my chair. My feet move and my head bobs!

“It is nerve-racking but that all goes away once the final bell rings and it’s worth it in the end because he just loves it so much.”

Charlie’s family will be keeping his friends and followers updated on his Instagram: @charlieknox09