The Knowsley Social partners with LCR Pride Foundation for LGBT+ summer extravaganza  - The Guide Liverpool
Contact Us Advertise with The Guide Our Video Services Follow us:

The Knowsley Social, the nine week festival featuring big name music and family events taking place at the Knowsley Estate this spring and summer, has announced a partnership with LCR Pride Foundation for a one-off LGBT+ summer celebration this June.

90s pop sensations S Club are preparing to take us back to our school disco days with all of their greatest hits including ‘Bring It All Back’, ‘Reach’ and ‘Don’t Stop Movin’ at the extravaganza on Saturday 5th June, which will be the first major LGBT+ event to take place in the UK this year as lockdown restrictions are eased.

MORE - Watch as we find out about Liverpool Biennial 2021

X Factor star Ameila Lily will also be performing with S Club and comedy queen Cheryl Hole, star of Ru Paul’s Drag Race UK, will take to the stage to provide some hilarious entertainment. More performers are also set to be announced in the coming weeks.

The exclusive event will support the work of LCR Pride Foundation and will take place inside The Knowsley Social’s big top tent, which has been built to hold 1,000 people only, to ensure a safe and enjoyable experience for all.

Families and friends can purchase tickets for VIP pods at the event, which will help raise money for LCR Pride Foundation, the Liverpool City Region’s LGBT+ charity. 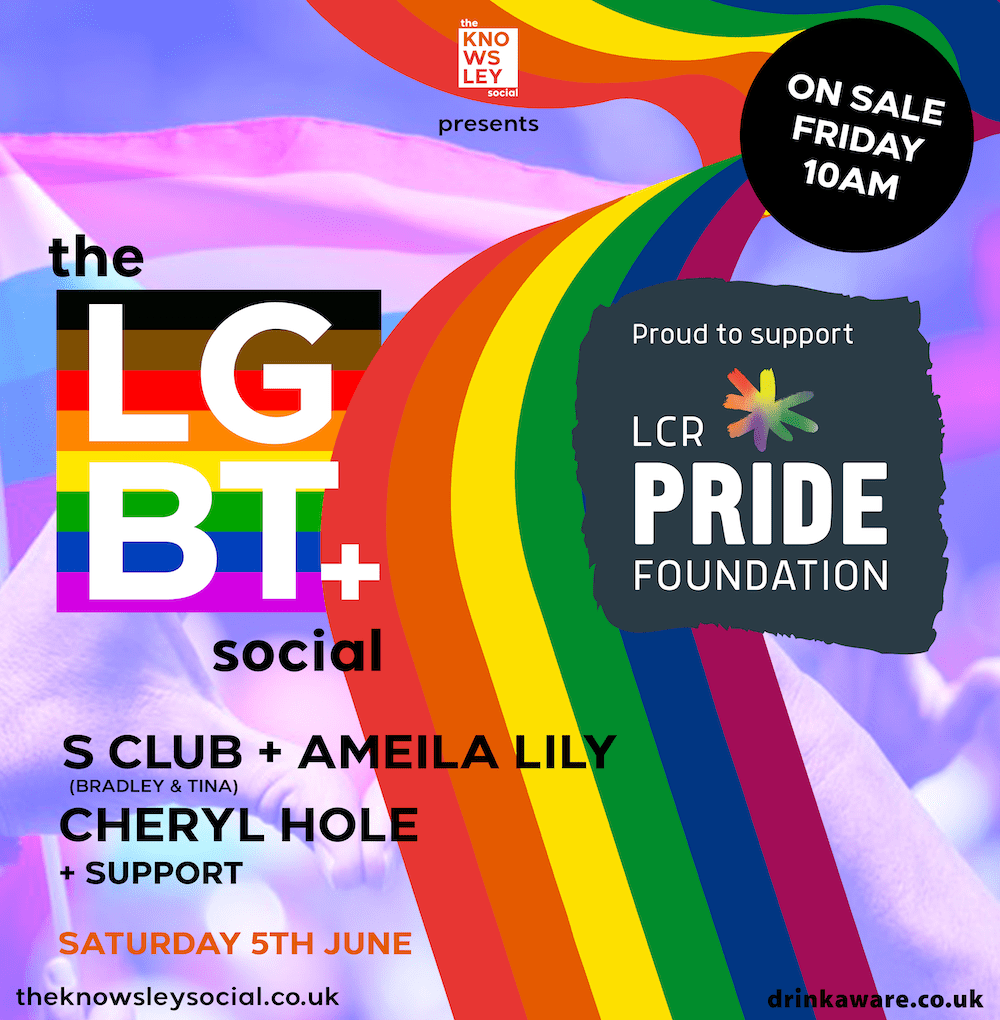 Tickets will go on sale this Friday 16th April at 10am at www.theknowsleysocial.co.uk

“We are incredibly excited for the LGBT+ Social – what a fantastic lineup! While nothing can replace Pride in Liverpool and the many other Prides that have been forced to cancel for a second time due to the pandemic, this event gives the LGBT+ community an opportunity to come together and celebrate safely.

“We would like to thank The Knowsley Social for supporting us by donating a proportion of every ticket sold to the foundation’s work. As a charity, we rely on partnerships like this one and public donations to ensure that we can continue to deliver event and initiatives that support and celebrate the LGBT+ community in the Liverpool City Region.”

MORE - Roxy Ball Room is back with outdoor drinking and dining

“We are absolutely delighted to be partnering with LCR Pride Foundation for the LGBT+ Social, which will be the first major LGBT+ event to take place in the UK this summer.

“The LGBT+ Social really is going to give everyone something to look forward to as we head out of lockdown and most importantly, it will raise money for LCR Pride Foundation. I am sure it will also be hugely exciting for members of the LGBT+ community  in the regions who are  missing out on Pride events this year.

“We’ve secured a packed line up including S Club and everybody knows there still ain’t no party like an S Club party – it is going to be fantastic!  Amelia Lily and Cheryl Hole are also performing and we’ll be adding more names in the coming weeks. Tickets are on sale this Friday and we’re expecting huge demand.”

The Knowsley Social will take place in the grounds of the Knowsley Estate this spring and   summer starting in May. M People’s Heather Small, The Shapeshifters, FIVE and The Ibiza Philharmonic Orchestra are among some of the other headline shows taking place.

LCR Pride Foundation works to position the Liverpool City Region as the most LGBT+ friendly region in the UK. The foundation delivers annual events including Pride in Liverpool, March with Pride and the LCR Pride Awards and fundraises to support community initiatives that advance the rights of LGBT+ people and promote inclusivity. This year its annual theme is From Now On, which highlights the challenges still faced by the LGBT+ community and calls for individuals, businesses and organisations to do their part to enact change “From Now On”.