The Sandon Hotel and Pub is hosting a football festival for LFC's last game of the season - The Guide Liverpool
Contact Us Advertise with The Guide Our Video Services Follow us: 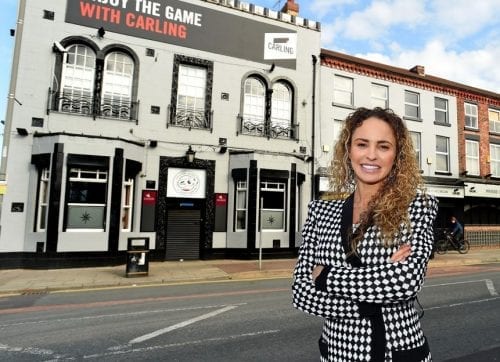 The newly opened hotel will erect a huge outdoor screen for Liverpool FC’s final game of the season.

The Sandon Pub, which has just unveiled the extension of a hotel, will host a huge football festival for Liverpool FC’s final game of the season and it’s FREE entry. Yesterday LFC legend, Jamie Carragher officially opened the new hotel in Anfield.

The hotel and pub, which is an official LFC hospitality partner, is erecting a huge outdoor screen to celebrate the end of the season.

Karaoke will be available so that fans can belt out their favourite LFC songs and BOSS Night will also be performing live.

Jamie Carragher in one of the new rooms at The Sandon Hotel.

BOSS Night was created by the Liverpool FC fanzine, with its events after Liverpool matches growing into some of the biggest events in the calendar.

The Sandon Pub will open its doors at 10am so that fans can start the party early, and there will be a wide range of food and drinks available.

Owner of The Sandon Complex, Kate Stewart, said: “We’re hosting the ultimate football festival with a huge outdoor screen taking centre stage so that every fan can get the best view of the final game of the season.

“The pub and wider complex always has an incredible atmosphere and we’re just a stone’s throw from the Anfield itself. With the hotel opening this week it’s the perfect time to visit us to see exactly why we’re renowned for being the only place to watch the match outside of the ground and an official LFC hospitality partner!”

For more info on The Sandon complex head to the website here.