The Smith Brothers are ready for some Santa Dash action - But who will win? - The Guide Liverpool
Contact Us Advertise with The Guide Our Video Services Follow us:

The Smith Brothers are ready for some Santa Dash action – But who will win? 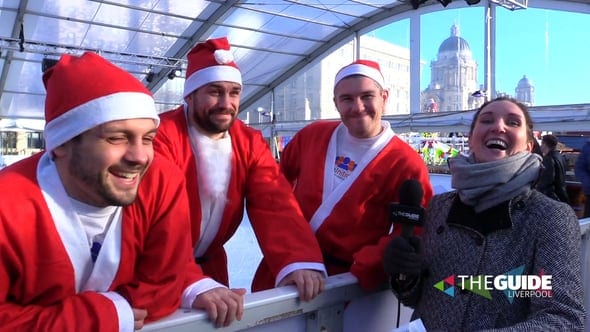 Home › Events › Christmas › The Smith Brothers are ready for some Santa Dash action – But who will win?

We sent Kate to the Liverpool Ice Festival Ice Rink earlier today to meet 3 of the 5,500 Santa’s set to run the Liverpool Santa Dash 2016 on Sunday, and it wasn’t just any 3 normal Santa’s – It was Liverpool boxing Legends – The Smith Brothers.

Paul, Stephen and Liam will be running on Sunday for a cause very close to their hearts and we found out just how competitive the three siblings are.

There are just days left to register to take part and run alongside these familiar faces.

Register or collect your Santa suit from the BTR office at 82 Market Street in Hoylake. The office will be open until 5pm on Friday (2 December).

Or call into Rapid Discount Outlet in Liverpool city centre (opposite the Radio City Tower), where you can register or collect Santa suits until 12pm on Saturday (3 December). There are no entries on the day.

Online entries have now closed but full details can be found at www.btrliverpool.com