Two major exhibitions celebrating the work of the creative geniuses behind The Mersey Sound will open this week (Wednesday 12 April).

As part of Liverpool’s Tonight At Noon programme of events – which mark the 50th anniversary of the publication of what is regarded as one of the most influential anthologies of all time – Liverpool’s Central Library and St. George’s Hall will host unique showcases giving an insight into the city’s creative landscape in the sixties. They will focus on the lives and work of the Liverpool Poets – Adrian Henri, Roger McGough and Brian Patten.

Both opening on Wednesday 12 April and running until Saturday 15 July, the FREE exhibitions are: 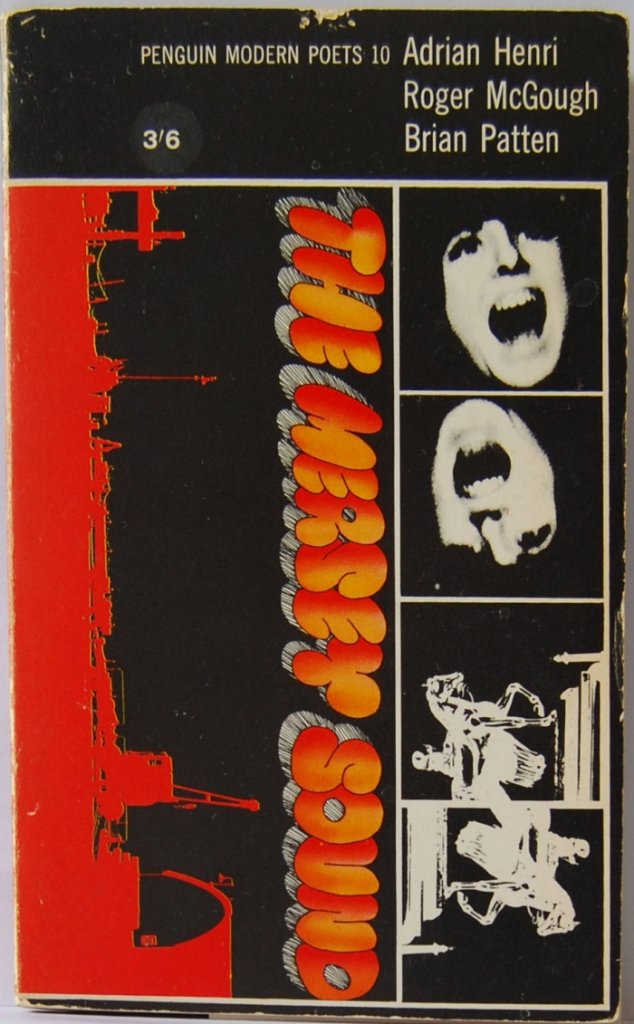 In 1967, The Mersey Sound brought poetry down from the shelf and onto the street, soon becoming a publishing phenomenon as it went on to become one of the bestselling poetry anthologies of all time. This exhibition charts the emergence of Adrian Henri, Roger McGough and Brian Patten onto the 1960s poetry scene, and the genesis of The Mersey Sound. The poets each had their individual style, but whether they wrote of young love, pop idols, atomic bombs, eccentric bus conductors or sci-fi superheroes, their work was contemporary, urban and accessible.

The exhibition includes newspaper articles, photos, leaflets and posters advertising early poetry readings in Hope Hall (later to become The Everyman) and other venues across Liverpool.  Also on display are small poetry magazines which were a key part of the underground cultural scene – these include Underdog which was edited by Brian Patten when he was just 16 and featured the work of his two fellow Liverpool poets as well as the work of American Beat poets.

Original manuscripts, drafts and correspondence with publishers track the fascinating journey of The Mersey Sound – the book’s original print run of 20,000 copies was expected to last ten years – it sold out in three months. That cemented Henri, McGough and Patten’s world-wide recognition as The Liverpool Poets.
An interactive touch screen display will allow visitors to explore the documents e.g. flicking through copies of Underdog, or looking through a scrapbook of reviews of The Mersey Sound. 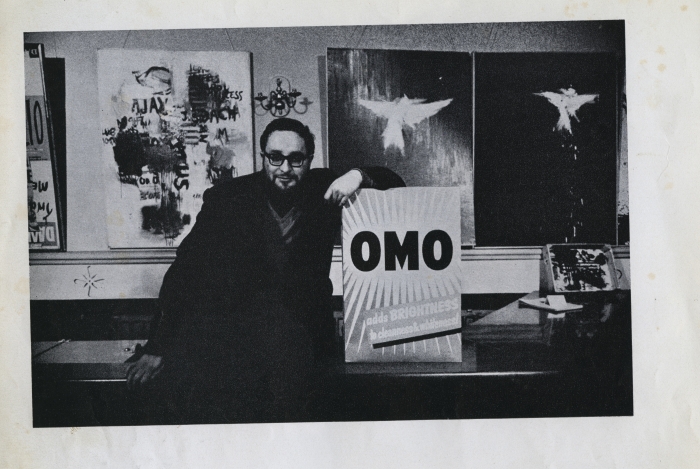 Although he came to prominence as a poet in 1967, Adrian Henri was regarded as a ‘total artist’ having trained as a painter and exhibiting widely throughout his career.

On display will be a selection of 1960s artworks, poems and original posters offering a glimpse into his multi-faceted body of work and will act as an artistic and musical counterpart to the Mersey Sound Archivesexhibition. Henri’s eclectic interests and activities, means among his achievements he fronted the unlikely poetry-and-rock band Liverpool Scene, leading John Peel to dub him “one of the great non-singers of our time”. In 1969 the band supported Led Zeppelin, played the Isle of Wight Festival and toured America.

The exhibition shows how the artist and the poet in him responded to changes occurring around him – in the 1950s and 1960s, his work was inspired by advertising, flashing neon signs and superheroes.

The second half of the exhibition ends with a room dedicated to poetry and performance, and to Henri’s band, with a display of rare rock posters advertising Liverpool Scene concerts, and video footage – including a Pathé News film showing their performance at the Isle of Wight Festival in 1969.

Both exhibitions, as well as the overall Tonight At Noon programme, have been produced by Adrian Henri’s partner, Paris-based curator Catherine Marcangeli, with the majority of exhibits coming from the Estate of Adrian Henri. 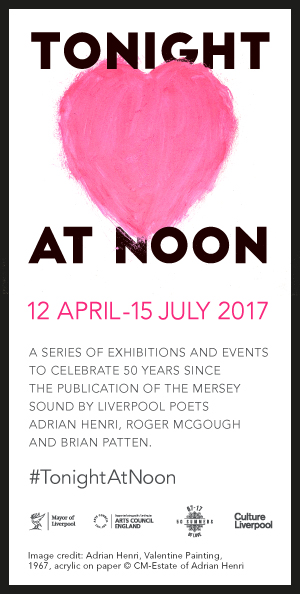 Ahead of the premiere of his newly adapted play The Story Giant, which takes to the stage at The Everyman on Thursday 13 April, Liverpool Poet Brian Patten will head to Central Library to see the exhibition for himself.

Catherine said: “Adrian Henri, Roger McGough and Brian Patten changed a generation’s perception of what poetry could be, and could be about. Their poems were accessible and anchored in contemporary urban culture – pop and popular, irreverent, humorous, political, tender, surrealistic. They shaped the poetry, music and art scenes of 1960s Britain, and their work has had a lasting impact on artists as varied as Paul Weller, Carol Ann Duffy and John Cooper Clarke.

“The two exhibitions work together to offer a glimpse of Liverpool’s vibrant art scene in the 1960s, where artists, writer and musicians collaborated, producing paintings, poetry, happenings, performances and music. In the lineage of Dada and Surrealism, Adrian strove to break down the old rigid barriers between art forms, to create a ‘Total Art’.”

Brian Patten said: “We didn’t have an agenda. It just seemed pretty obvious that if people were turning up to the readings it was important to present our work the best we could and to make it accessible.

“The two exhibitions are in themselves very different, however both celebrate the 1960s when it was a hotbed of cultural creativity, giving a voice to the ordinary man and woman on the street.

“Catherine has done a fantastic job curating both showcases – the archives are fascinating and give a real insight into the lives of Brian, Adrian and Roger.

“I hope as many people as possible take the opportunity to see these rare archives in the stunning surroundings of both St. George’s Hall and Central Library.”

The Tonight At Noon programme is key part of Liverpool’s 67-17: 50 Summers of Love celebrations, running from Wednesday 12 April to Saturday 15 July and has been funded by Arts Council England and supported by Liverpool John Moores University and Edge Hill University.