There's a new sculpture planned for Liverpool's skyline - The Guide Liverpool
Contact Us Advertise with The Guide Our Video Services Follow us: 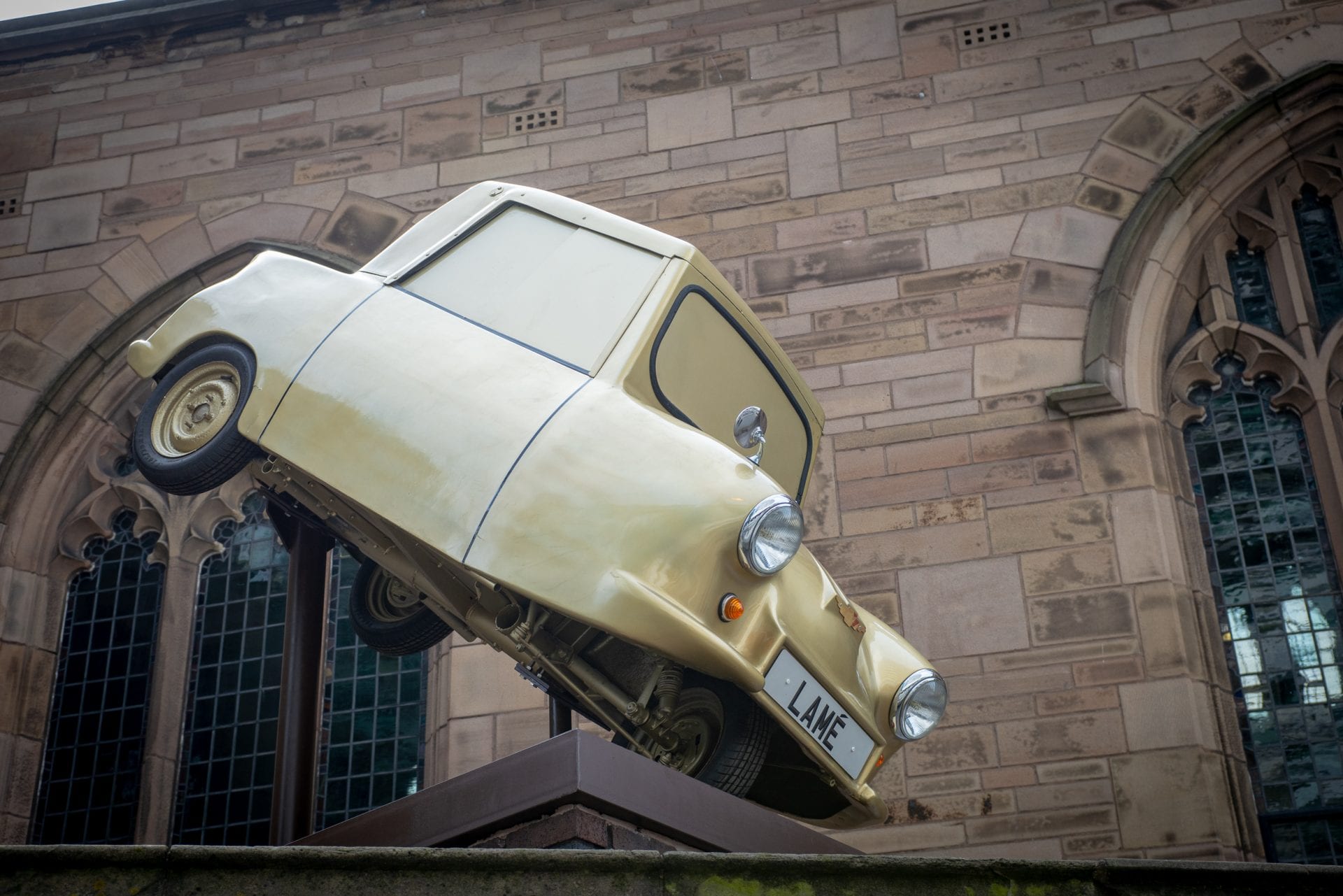 An iconic new sculpture is to be erected on the world famous Liverpool skyline, Liverpool BID Company has announced today.

For the second year running, the BID is collaborating with Liverpool Parish Church, also known as St Nick’s, and city gallery and art organisation, dot-art, to bring an exciting new piece of art to The Liverpool Plinth, located at the side of the church overlooking Chapel Street and the city’s UNESCO World Heritage waterfront.
The new piece will replace last year’s winning sculpture, Gold Lamé, by Tony Heaton, pictured above – a suspended, bright gold car – that has brought smiles to faces for the last 12 months, not to mention making international headlines when it was first unveiled. Gold Lamé was originally commissioned as part of Art of the Lived Experiment for DaDaFest 2014 at the Bluecoat.

Artists from across the north of England are being urged to submit existing work that could call The Liverpool Plinth their home for the next year, with the closing date for applications on Thursday, March 28. The winner will also receive an additional £1,000 prize.
The project forms part of one of the pledges in the BID’s business plan for Commercial District BID – to create a Public Art Strategy that will serve to enrich the experience of those visiting and working in the area. The unveiling of the new piece of art is scheduled for spring 2019.
The Revd Dr Crispin Pailing, Rector of Liverpool, said:
“Among the roles of the church in the city centre is to provoke, entertain and animate. In its first year, The Liverpool Plinth has already achieved a reputation for all three, and I hope that we can continue to give both residents and visitors new opportunities through the arts to reflect on the world around them.”
Bill Addy, chief executive of Liverpool BID Company, said:
“When we first launched The Liverpool Plinth project in 2018 we were taken aback by the overwhelming response from the huge number of artists eager to have their work considered. The unveiling of Gold Lamé also caused quite the stir online. It will be sad to see Gold Lamé leave The Liverpool Plinth, but exciting to welcome a new sculpture to the Commercial District BID, for businesses, residents and visitors to enjoy. It’s also another fantastic opportunity for sculptors in the region to showcase their work.
“Liverpool BID Company is committed to creating a thriving and bustling Commercial District BID, where people want to visit and with the right environment for our levy paying businesses to grow and prosper. Bringing new and evolving public art to the heart of the business community, such as The Liverpool Plinth, is one way of achieving our goals within our Public Art Strategy.”

Sculptor and artist Tony Heaton, creator of Gold Lamé, said:
“Having just returned to live in the North West, one of the great aspects of being selected was the opportunity to meet such enthusiastic and positive people promoting the arts on Merseyside. The promotion and profile was also impressive with coverage on TV, radio and social media such as the BBC website. It seems like everyone I bump into in Liverpool has seen my work. It’s been a great experience and I would encourage other sculptors to put themselves forward.”
Before Gold Lamé took up residency, The Liverpool Plinth had lay empty since the removal of Brian Burgess’s “Christ on a Donkey” several years prior.
Sculptors living or working in the north of England (North West, North East, Yorkshire and the Humber) are asked to submit existing work for consideration before the closing date on Thursday, March 28. All delivery and installation costs for the winning artist will also be covered.