This is how Liverpool celebrated as LFC are victorious in the Champions League Final - The Guide Liverpool
Contact Us Advertise with The Guide Our Video Services Follow us: 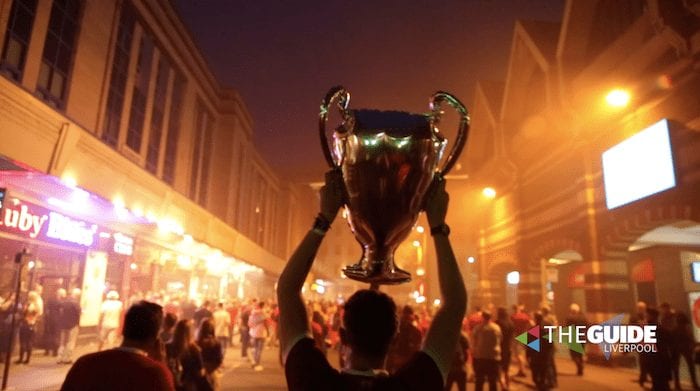 You’ll Never Walk Alone rang out from every doorway, window and rooftop across the city, in fact you can still hear it now.

They’ve done it. Liverpool Football Club has won its 6th Champions League title and the entire city has been painted red in celebration.

With goals from Magic Mo Salah and Divock Origi, the reds romped to victory with a 2-0 victory over Tottenham who failed to find the back of the net. While thousands set sail, took flights and drove the 2,400 mile round trip to Madrid to watch the final, it was right here in Liverpool where the unforgettable scenes of support and pride, flooded out on to the city streets.

Watch above as our cameras captured the fans reactions to the game, the goals and of course the victory.

From mid morning on Saturday 1st June, the stage was set. The likes of Concert Square, Mathew Street, Baltic Market, Aintree Racecourse, the M&S Bank Arena and countless bars and restaurants across the city rolled out their big screens and prepared for the final.

Streets were closed as fans poured in to crowd around any and every screen from early doors and soaked up the incredible atmosphere ahead of the 8pm kick off. Chanting, flares and the Anfield songbook on repeat, a sea of red engulfed the city centre.

With every single venue packed to the rafter and beyond, the city erupted within 2 minutes as Mo Salah kick started LFC’s final title race with an early penalty.

Tensions were high throughout the game and into the second half as Spurs put up a hell of a fight. With a late goal from Divock Origi securing the deal and the reds’ 6th European title, Liverpool went off!

We take out hats off to the all the Merseyside venues and their amazing event and bar staff for the incredible scenes across the city throughout the day and night. It’ll be one remembered in sporting and local history forever.

It’s all eyes on the prize now as the team prepare for a home-coming and victory parade like no other. We’ve got all the info you need to see Jurgen Klopp and the team show off the silver wear at the Victory Parade here. If last night was anything to go by, we suggest getting your spec super early, check out the route and make sure you’re in place before the start at 4pm.

We want to see your pics and videos from Madrid and back home. Drop us a line @TheGuideLpool and we’ll share the best on our socials.

You can watch all our coverage of the Champions League Final from across the city on Twitter, Facebook or Instagram and keep it locked to our socials as we bring you the LFC victory parade as it happens.