This Week in Liverpool 28th January - 3rd February 2019 - The Guide Liverpool
Contact Us Advertise with The Guide Our Video Services Follow us: 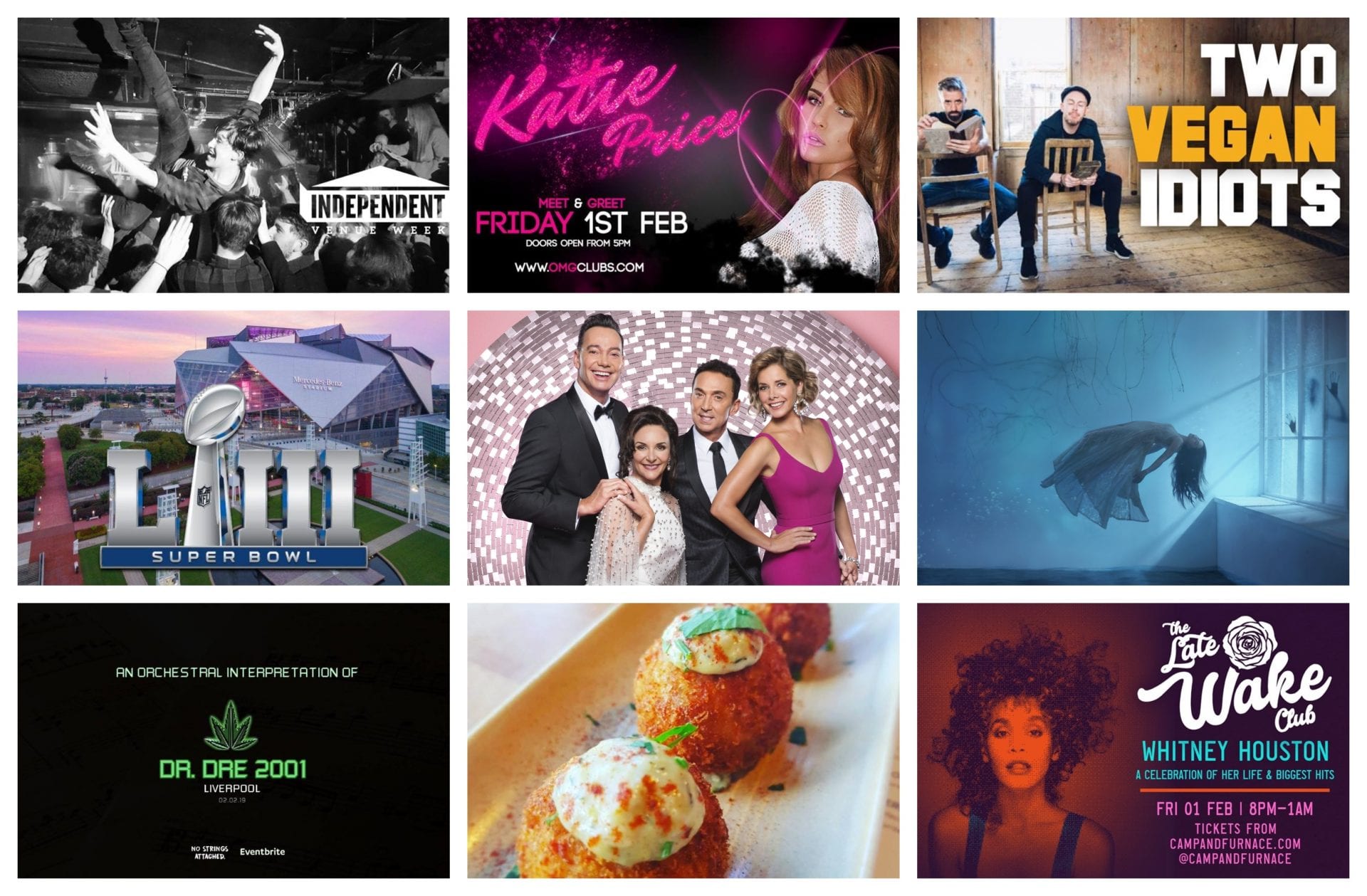 It’s finally the last week of January so it’s time to let our hair down again!

Having endured all 75 days of January, we’re pleased as punch to bring you the best of what’s on this week in Liverpool, because we can get back into enjoying ourselves again! We’ve got big name comedy performances, Super Bowl action, it’s Independent Music Venue Week so there’s loads of bands on, Whitney gets her own wake in the Baltic and hold on to your glitter balls, Strictly Come Dancing is in town too! 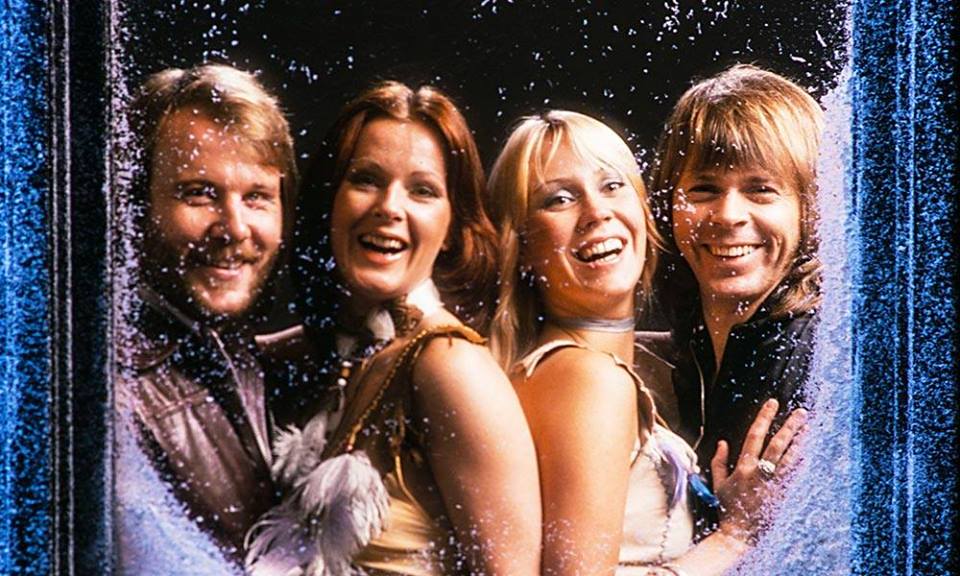 One for the Re-Freshers! Baltic Social welcomes you back to our beloved city with a night dedicated to the Swedish super group ABBA. Expect all the bangers from this brilliant tribute band. More info here.

How about this for a January dining deal! This is Livin, Crosby is offering 3 courses for just £10 between Monday and Thursday this week from 12pm – 9pm. See the menu and book here.

Getintothis presents Independent Women for IVW at Phase One

Tickets are just £5 for this night of live music, spoken word and visual art all brought to you by our mates over at Getintothis and all part of Independent Venue Week. Witch Fever headline alongside Mersey Wylie, Niki Kand and Sara Wolff, with spoken word poetry by Cath Bore and Janaya Pickett as well as an art exhibition from Johanna Wilson. Yes the girls! Book your tickets here. 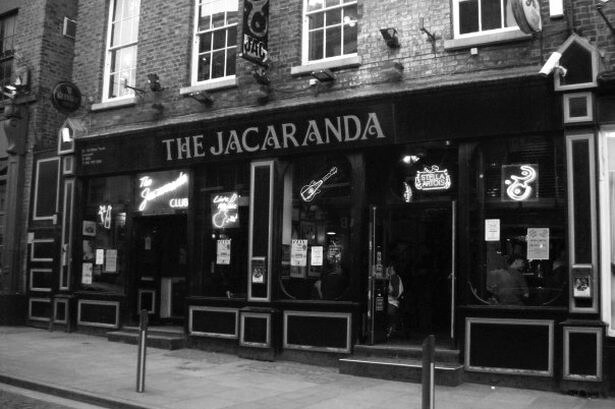 3 acts will take to the stage at The Jacaranda to kick off Independent Music Venue Week 2019 on Monday night.   Expect some of the hottest talent, the city has to offer and the tickets are free. More here.

If you’re missing your weekly dose of the ballroom action, get down to the M&S Bank Arena on Tuesday for not one, but two thrilling Strictly Come Dancing shows featuring all four judges and an array of 2018 celebs and their partners. If you’re not already humming da da da da da da daaaahhhhh, you will be! Tickets here.

Hanover Street’s finest chicken shack, Yard & Coop is offering a clucking great deal. Sign up for Mates Rates and receive 20% off during the week and a whopping 50% off on Wednesdays. Offer open to students and people working in the listed industries…..Find out more here.

There’s a special offer for those who thrive on pressure at Escape Hunt, Royal Albert Dock. For those who are Armed Forces Personnel, Emergency Services of NHS staff, you can get 10% off your next exhilarating game, Monday to Thursday. Black Beards Treasure anyone? Book here.

Soul Jam Back to Boogie, Constellations

The original touring Funk, Soul & Disco party is back at Constellations on Wednesday night, adding some much needed boogie to the end of January. Tickets on sale here.

Carl Donnelly & Julian Deane AKA Two Vegan Idiots bring their critically acclaimed stand up comedy to the Hot Water Comedy Club on Wednesday night from 7pm. If you love a bit of observational genius, get your tickets here.

You know sometimes when you just need some croquettas in your life? The weather is crap, our summer hols are an age away but it’s okay, because Neon Jamon brings a little bit of Spanish tapas sunshine to Berry Street! Menus and more here.

Treat yourself to a Bottomless Brunch this week, including two courses and unlimited prosecco. It’s also your last chance to enjoy 50% off the a la carte menu at Castle Street Townhouse too. Booking and menus here.

There’s a huge showcase of amazing talent taking place at the Liverpool Phil on Thursday night as the LIMF Academy alumni perform live from 7pm. Including a special guest appearance from Sub Blue. Tickets here.

Dan Snow- An Evening with the History Guy, Epstein Theatre

Prepare to be completely enthralled as historian and presenter, Dan Snow recounts fascinating anecdotes plus little known historical facts about our beloved city at the Epstein Theatre on Thursday night. More info here.

Chances are this weekend is your first night out after a barren January so why not make it one to remember and head to Invisible Wind Factory for the 2manydjs DJ set on Friday night. Tickets on sale here.

The one and only Whitney Houston is the recipient of this month’s Late Wake Club at Camp & Furnace. Doors open at 8pm for a huge night of all her greatest hits. Bring your singing voice and get your tickets here.

Fancy meeting Katie Price on your night out in Liverpool this weekend? Head to OMG Liverpool from 5pm for a meet and greet with the former glamour model, author, pop star and presenter. Info here.

If you’re hitting the shops at Liverpool ONE for some retail therapy, prepare to experience World Ukulele Day 2019 as this huge busking event. Raising funds for the Clatterbridge ‘Go Green’ campaign, there’s a stage at Bierkeller and also a number of busking spots across the L1 site. Send us your fave performances on Instagram @TheGuideLpool. More here.

Final release tickets are selling fast for the Orchestral rendition of Dr Dre: 2001 LIVE at Circo on Saturday. Accompanied by DJ’s, singers, and lyricists, this is not your average Orchestral event. Find out more here.

See-Through Ghostly Tales in the Baltic

Shake up your Sunday routine and head to Homebaked community bakery in Anfield for a pizza making workshop from 3pm. Not only will you get to create your own pizza from scratch, you also get a glass of prosecco on arrival, one to enjoy with your own pizza and a winning recipe to take home! Book on here.

More: Liverpool’s best Sunday Roasts as voted for by you, here.

Shown live from the Mercedes Benz Stadium in Atlanta, book your table package for all the Super Bowl 2019 action at Hilton Hotel Liverpool. Available for £50 for 4 people or  £100 for 8 people which include drinks on arrival and half time pizzas. Single tickets available for £5 to include a drink on arrival. Info and booking here.

Welsh comedian Rhod Gilbert is back at the Liverpool Empire on Sunday with brand new show The Book of John. The straight talking, no shit-taking comic has crafted a brilliant show all about his bloke he met, called John. Tickets here. 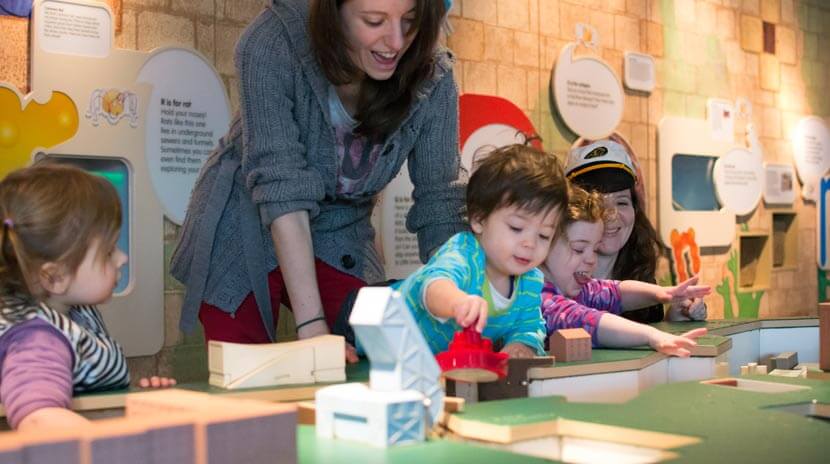 We had a fab day exploring the Museum of Liverpool at last weekend and we’re blown away by the amount of free activities there are for families. Check out Little Liverpool for an adventure that’s perfect for pre-schoolers. More info here.

You can commute across the Liverpool City Region with Merseyrail for less than the cost of a cup of coffee. Less traffic, more me time! Find out more here.