Thousands of A-Level grades downgraded despite record high results - The Guide Liverpool
Contact Us Advertise with The Guide Our Video Services Follow us:

Thousands of pupils’ results have been downgraded as a result of this year’s summer exams being cancelled because of Covid-19 despite record-high results.

The proportion of A-level entries awarded an A grade or higher has risen to an all-time high, with 27.9% securing the top grades this year, figures for England, Wales and Northern Ireland show.

But exam boards downgraded nearly two in five (39.1%) pupils’ grades in England, according to data from Ofqual – which amounts to around 280,000 entries being adjusted down after moderation. 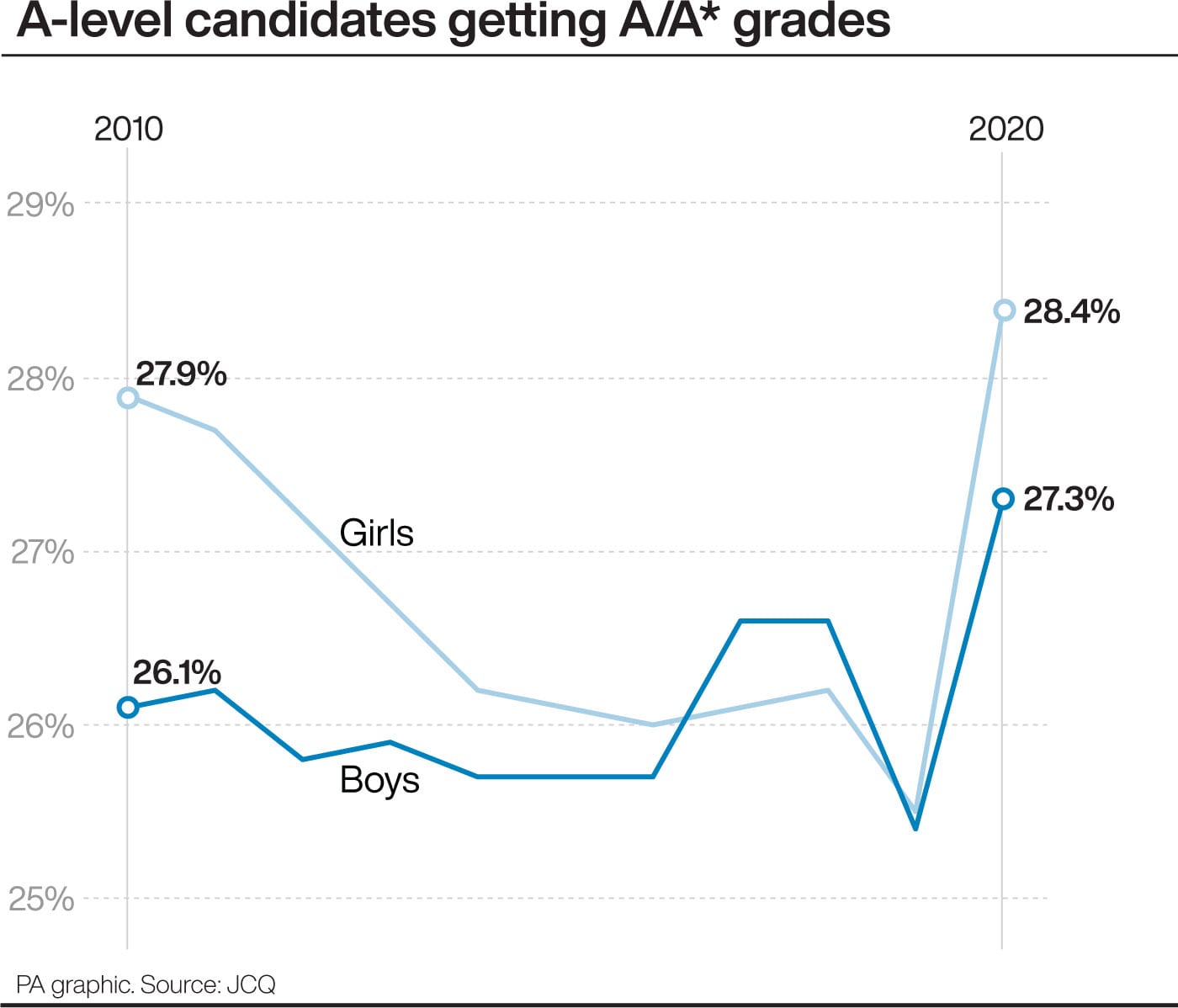 Teachers were told to submit the grades they thought each student would have received if they had sat the papers, alongside a rank order of students, after exams were cancelled amid the pandemic.

Exam boards moderated these grades to ensure this year’s results were not significantly higher than previously and the value of students’ grades were not undermined.

In England, a total of 35.6% of grades were adjusted down by one grade, 3.3% were brought down by two grades and 0.2% came down by three grades, figures from Ofqual show.

But overall, the proportion of entries in England, Wales and Northern Ireland awarded the top A* grade this year has surged to 9% – the highest proportion since the top grade was first introduced in 2010.

In total, 27.9% of entries were awarded an A or A* grade this summer, which is up by 2.4 percentage points on last year when 25.5% achieved the top grades.

The figures, published by the Joint Council for Qualifications, cover A-level entries from students in England, Wales and Northern Ireland where around 300,000 students are receiving their results.

The Government announced late on Tuesday that students in England will have the “safety net” of being able to use mock exam results as the basis for an appeal if they are higher than the calculated grade. 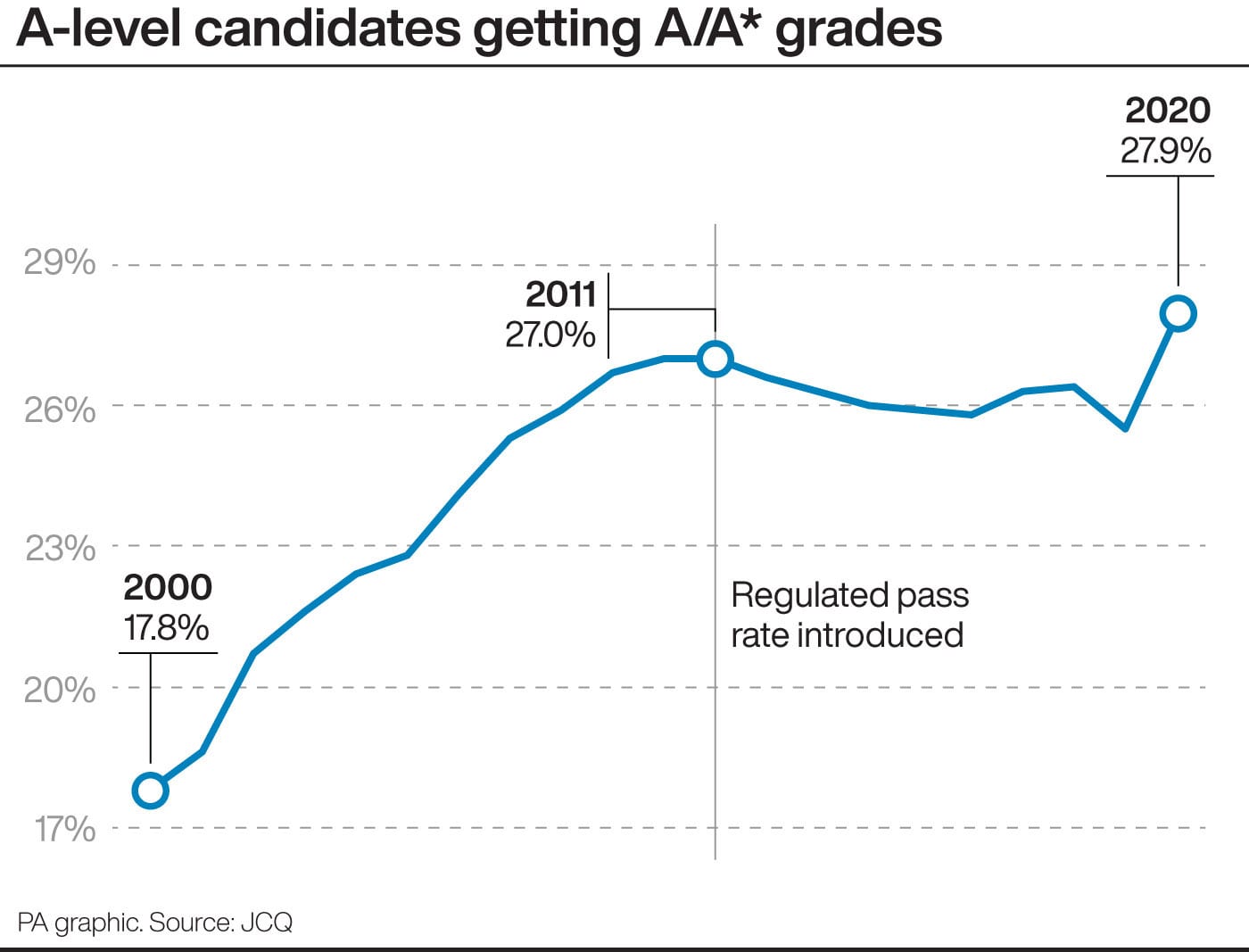 It came hours after Scotland’s Education Secretary announced that moderated calculated grades would be scrapped following an outcry after more than 124,000 results were downgraded.

– ICT (information and communications technology) saw the biggest drop in candidates for a single subject with more than 1,000 entrants, falling by 15.3% from 1,572 to 1,332.

Speaking about the A-level results, Geoff Barton, general secretary of the Association of School and College Leaders (ASCL), said:

“While there has been an overall increase in top grades, we are very concerned that this disguises a great deal of volatility among the results at school and student level.

“We have received heartbreaking feedback from school leaders about grades being pulled down in a way that they feel to be utterly unfair and unfathomable. They are extremely concerned about the detrimental impact on their students.” 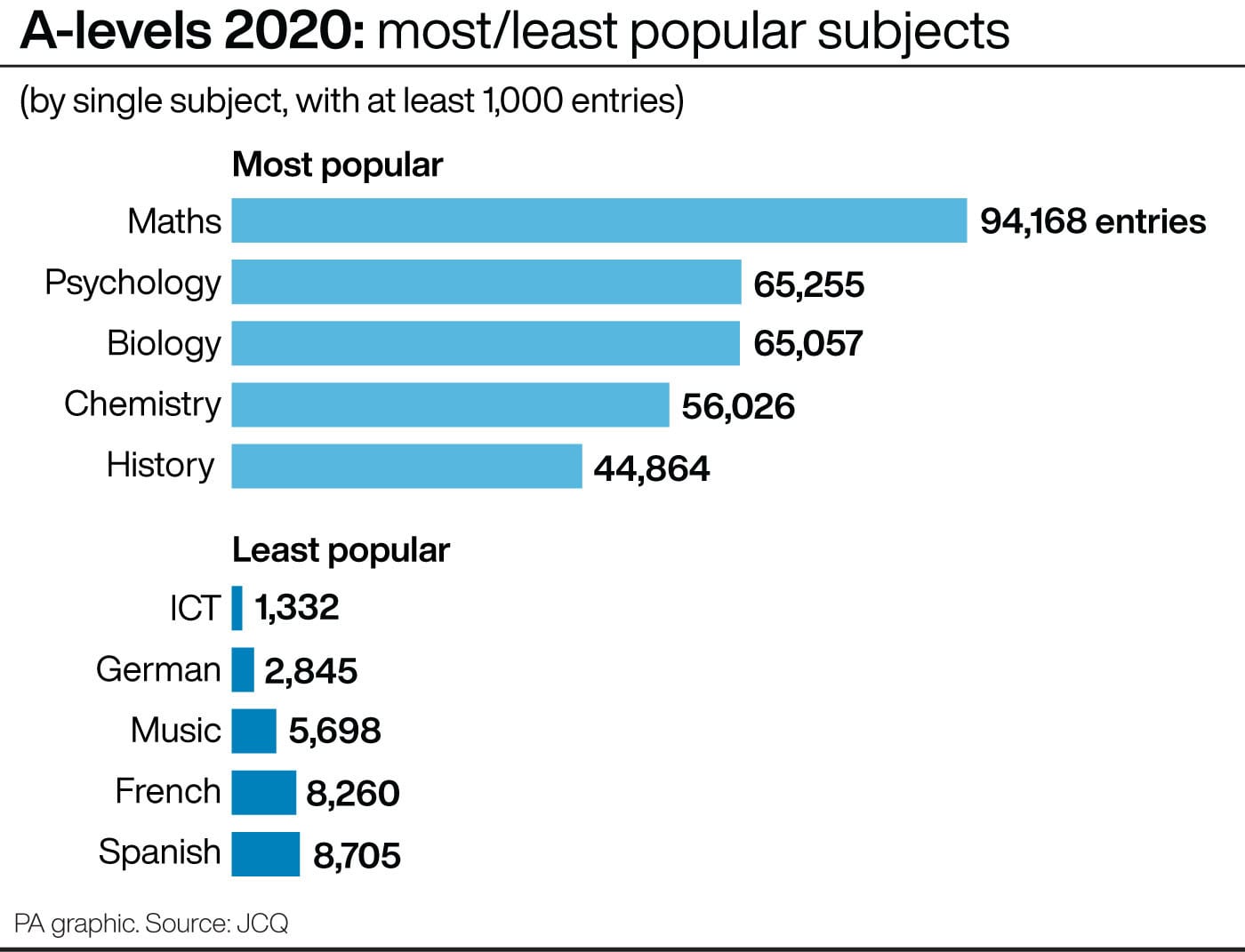 He added that school leaders are “dismayed” that the statistical model used to standardise grades has had a “devastating impact.

Mr Barton said: “We are now calling on the government and the exam regulator Ofqual to review the situation as a matter of urgency, and we would warn them against simply digging in their heels, and insisting all is well.”

“Students across the UK receiving their A-level results today should be proud of their grades, which reflect their hard work and commitment over the previous two years.

“Thank you to all the teachers, senior leaders and exams officers whose efforts to produce the Centre Assessment Grades will mean students are able to move on to the next phase of their education or into employment.

“This is a moment for students to celebrate their learning and we wish them all the best as they take their next steps in life.”