Unilever runners gear up for Port Sunlight 5K this weekend

A team of 40 enthusiastic runners from Unilever are gearing up to take part in the BTR Port Sunlight Road Race this coming weekend. The runners, many of whom are about to embark in their first race event, have been eagerly training to take part in the 5K on Sunday, 17 April. They have been pulling on their running gear and trainers during their lunch breaks and after work to take part in regular training sessions round the picturesque village in readiness for the race.

The BTR Port Sunlight Road Race sponsored by Unilever is now firmly established in the village’s event calendar and on the region’s running scene. This is the fifth consecutive year the race day has taken place in the village, which features 5K and 10K races, followed by a 1K Kids’ Fun Run.

Unilever staff enjoy a number of employee-run clubs across its Port Sunlight sites, and last year a ‘Couch 2 5K’ group was introduced. Co-ordinated by Cathy George, the group follow the nine-week NHS training programme, which takes participants from being a complete beginner to being able to run for 30 minutes non-stop.

“We’ve taken around 40 staff members through the programme so far and, for most of them, the BTR Port Sunlight Road Race will be their first organised running event. They are quite nervous but very excited. They still can’t quite believe that they can run 5K without stopping. We are continuing to train hard for the big day on 17 April, when we are determined to cross the finish line and collect that well-earned medal.” 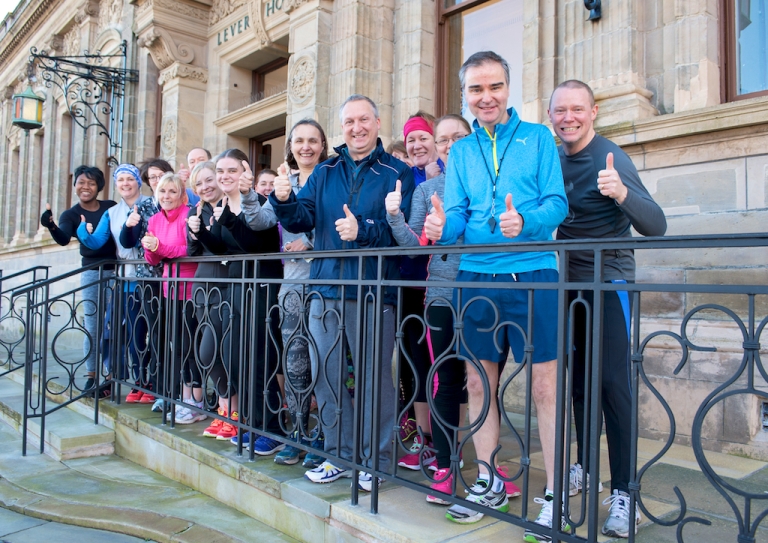 Unilever is supporting the event for the third consecutive year as Unilever brightFuture – its movement for people everywhere who want to make the world a better place for their children and future generations.

The BTR Port Sunlight Road Race events start and finish next to the village green, adjacent to Port Sunlight Museum. The village green provides a fantastic backdrop for the day’s proceedings, which also includes entertainment and refreshments. The Deputy Mayor of Wirral Councillor Pat Hackett and the Deputy Mayoress will be in attendance to cheer on and congratulate the runners.

The 5K runners set off at 10am to complete a loop route, taking in key sights across the picturesque village. They are followed at 11am by the 10K race, which is two laps of the same course. All 5K and 10K finishers will receive a bespoke finishers’ medal, T-shirt and goody bag. In addition to the 5K and 10K races, a 1K Kids’ Fun Run will start at approximately 12.30pm once the race course is clear. They will also receive a medal and a goody bag.

The event’s official charity partners are BTR Footsteps Fundraisers charities for 2016 – Radio City’s Cash For Kids; Everton in the Community; and Zoe’s Place. The BTR Footsteps Fundraisers initiative brings the charities together through BTR’s key race events by encouraging participants to fundraise and support them. Funds raised will be split equally between the three charities. Youngsters taking part in the fun run will be welcomed by the charities’ mascots – Courage, Chang the elephant, and Zoe Bear.

Last year almost 1,800 runners took part, including almost 40 running enthusiasts who ran in both the 5K and 10K to be double racers on the day. Runners were joined by thousands of spectators who lined the village roads to lend their support and cheer the runners on to the finish line.

Unilever is extremely proud of its history and heritage in Port Sunlight, where company founder William Lever built his factory and village in 1888. The company continues to have world class manufacturing, R&D and IT facilities based here, along with a third of its UK workforce. Unilever’s brands include household names Persil, Dove, Tresemme, Radox, Comfort and Surf.

Entries for the BTR Port Sunlight Road Race 5K and 10K are still open. Enter online at www.btrliverpool.com or at the BTR office at 82 Market Street, Hoylake.

Entries for the 1K Kids’ Fun Run are taken on the day, but please register your interest in advance by emailing [email protected]